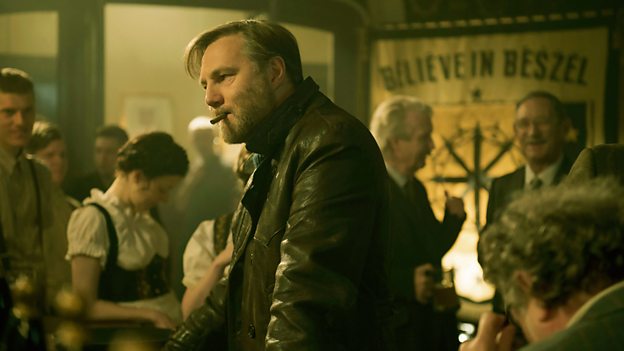 "I had heard wonderful things about China’s work, specifically about The City & The City so it was a book I was dying to read. I then read Tony Grisoni’s scripts and I thought it was a really fascinating idea. Tony had done an amazing job of creating this very complicated world in which two cities coexist in this strange way, living amongst each other but pretending they are not there. The scripts presented as slightly sci-fi, slightly thriller and a romantic story about a divided city, mixing together all of the genres that interest me as a filmmaker."

Bringing a project like this to fruition was not a simple task. Tom explains his process.

"Firstly, it began with me trying to have a few ground rules in my head and one of them was to make the story clear, so the audience weren’t playing catch up. It is important that it is accessible, to let the audience in so it didn’t feel like an intellectual experience but more of an experiential one which we can live in and feel immersed in, in the same way the characters are.

"Then it was about finding as many pictures that can express something of what I was feeling emotionally. We had huge, elaborate mood boards and tonnes of research. I read lots of articles about cities and different urban experiences and looked at loads of street photography from divided cities, that became a big pull. Then it was about getting a great team together. These people became my collaborators and once they got to grips with my basic direction, everyone was bringing wonderful ideas to the table. The sound department was important in creating the two different sounds of each city, and production and design had a vital role, presenting a more crumbling city of Besźel and a more modern, swankier city of Ul Qoma.

"Building the architectural look of this world was extremely important. One part of the street would be used for one city and the other would be used for the other city and then we would slowly reveal that they are next to each other. It is all in the details, for example, the framing of what part of a building you look at when you are in one city in comparison to the other. We didn’t want to rely on CGI or visual effects because we wanted to make it seem real and make people feel like this could happen to them. I wanted to convey this idea that you could be walking down the street, looking at Boots and then walk down the same street, the other way and see M&S and not even realise they are in the same city. It’s about mimicking those really ordinary things that happen to us all of the time when we miss the detail. It is about letting the audience in on that."

Whilst Tom’s visions were clear, he reveals that there were many challenges he and his team faced along the way.

"One major logistical challenge was that we wanted to go to a European city like Prague or Budapest to film but because of Brexit and the crumbling pound, we couldn’t really do that. Fittingly, we were affected by our own divided nation and the economics of that. Initially that was a big conundrum but it soon became something which forced us to think outside the box. We designed each frame and dressed each little bit of street, which helped to focus our vision to our restricted approach and pushed us towards something better than if maybe we had the luxury of being able to swing the camera around 360 degrees in a Budapest street.

"Every detail needed to be addressed; we couldn’t let any small thing slip. We wanted Besźel, one of the cities, to be the more relatable place but with hints of Eastern Europe so we had to figure out how we would create posters and graphics with a nod to that part of the world. I was very keen that when we went into Ul Qoma that it felt exotic for Borlú, very different in the same way we would feel if we got off a plane in Spain. The signs would read differently, the language would be different, everything would feel unusual. So I was very keen that we cast actors who were non-Brits to act in Ul Qoma so there weren’t overhearing British accents. We even created a whole new language for the drama. The language of Ul Qoma is called Illitan. We had an amazing expert who came along and created an alphabet and those actors had to learn lines in this invented language."

One aspect of this project which did not prove challenging for Tom was casting David Morrissey in the leading role.

"I have been a fan of David’s for as long as I can remember and I always thought of him as a really transformative actor. I’ve been blown away by his amazing range and the detail he will give you in terms of characterisation. Whatever he has done I always felt connected to the humanity of the character he is playing so I believed he was the perfect person to let us into the emotional world of this story. Tony wrote this affecting love story of loss and yearning and it felt brilliant to have that as part of a story which is focused around crime and set in this concept of divided cities. I am hoping the audience will connect with Borlú’s inner and emotional life. David brings that with such great sincerity and conviction and emotional authenticity for this project that it became the beating heart of the whole piece. I can’t imagine anyone else doing that. He is the smartest actor. He becomes a collaborator, not just an actor and he was a wonderful ally to have throughout this whole process."