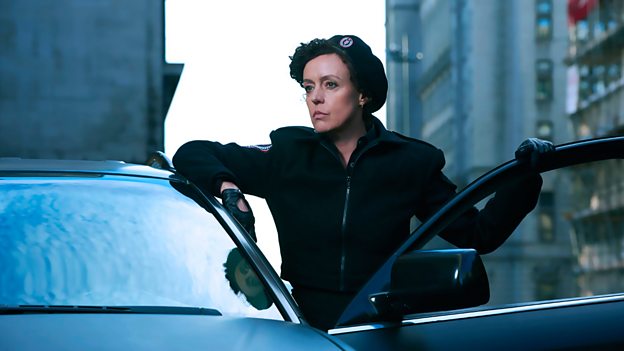 It was a breath taking moment to discover that the two parts of the city exist in the exact same place, two realities share the same streets, the same boardwalks, that two populations have been educated to 'unsee' each other.Maria Schrader

Category: BBC Two; Drama
The City & The City is a drama set in a divided city. For Maria Schrader the correlation between fiction and the past of her hometown, Berlin created an instant connection that drew her to the project.

"When I started reading the script I instantly thought of my hometown of Berlin which itself was a divided city while the wall was still up. The difficulty and anxiety in crossing the border, the armed surveillance everywhere, the Unknown on the other side, only a block away, intimidating and almost scary with its different atmosphere and politics. It all felt exactly like Berlin back in the 80s.

"It took me until the end of the first episode to understand that The City & The City is not a period story, that both cities are not actually geographically divided. It was a breath taking moment to discover that the two parts of the city exist in the exact same place, two realities share the same streets, the same boardwalks, that two populations have been educated to 'unsee' each other.

"From that moment on I was completely taken by the idea and the whole project. The City & The City is an investigation full of suspense and has the classic elements of a detective drama, but I was also intrigued by the political and social set up. It could be a fantasy or science fiction story but it is a brilliant metaphor for now - we all are trained to 'unsee' what's in front of our eyes.

"This double reality is a formidable challenge for the filmmakers. I've watched earlier works from director, Tom Shankland, and I was really curious to find out about his visual ideas for The City & The City, what kind of worlds he and his DOP would create. When I first arrived on set in Liverpool, they showed me stills of what they had shot already and I was so impressed and excited to be part of this incredibly interesting and artistic project."

Maria tells us about her character, Senior Detective Dhatt, and what it was that made her want to play this role.

"Dhatt is a high-ranking officer within the omnipresent and highly feared Ul Qoma Police and it would seem from the outset that she shares their beliefs as she executes commands without hesitation. However, it is her curiosity and her sense of justice that leads her to develop doubts.

"In the novel this character is a man: strong, hairy and powerful. I thought it was a brilliant idea from Tony Grisoni to turn Dhatt into a female character. It adds complexity not only to the character but also to the relationship with David Morrissey’s lead character, Inspector Tyador Borlú. A woman in such a position is rare and still a challenge for most men, in both life and fiction. It's even more rare how she exercises that power without apology, setting the rules and giving the orders. However, she is also sensitive, highly alert and intelligent enough to realise that collaboration with Borlú is necessary."

Having not met David (Morrissey) previously, Maria reveals what it was like to work alongside him everyday.

"David and I shared every scene together which meant that we didn’t just develop a relationship as Dhatt and Borlú but also as actors and friends. We talked about the scenes and we talked about a thousand other things. He introduced me to his hometown of Liverpool; he is the most generous person, full of stories, witty and reliable. It was my first time working in the UK and it couldn't have been a more enjoyable experience. It was also wonderful to be part of such an international crowd of superb actors."

The City & The City takes place within two very different settings, Besźel and Ul Qoma. Maria reveals some of the distinguishing elements of these vastly opposing settings.

"Besźel is dusty, shabby and poor. The interiors were old and run down, as if from the Gründerzeit Epoche. The exteriors were rich in detail with lots of people, street vendors, smoke, chaos and dirt. It was the same with the costumes: layers and layers like in post-war time. The dominant colours of lightning were warm browns and yellows which all added to the overall effect.

"Every morning I sat in the makeup trailer admiring the endless number of pictures and photographs around me on the walls which were sources of inspiration for the different hair and makeup styles in both cities. For the people in Besźel, it would be loose and sometimes greasy hair, circles under the eyes, tattoos here and there. The average Ul Qoman citizen, on the other hand, wears a slick hairdo and precise makeup.

"Ul Qoma is the rich, clean, organised and militarised city. The main colours are red and black and the lightning is rather cold. The architectural sets are intimidating - big, empty and dominated by glass, concrete and steel.

"To distinguish each city even more from the other, Tom had the fantastic idea to create a different language for Ul Qoma. Since Besźel is the hometown of the show's hero, Inspector Borlú, Tom decided that Besźel should feel like home for the UK audience and so the citizens spoke English. However, the moment Borlú crosses the border to Ul Qoma he's not only confronted with a foreign city and atmosphere, he also hardly understands the language and is surrounded by a babylonic mix of accents. I was so impressed by the work of our linguistic expert who created a whole new language for us, which sounded almost Eastern European."