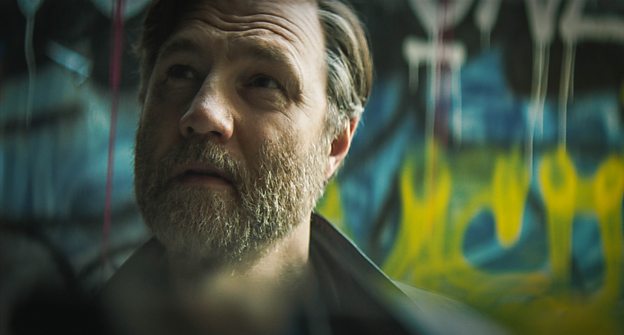 Category: BBC Two; Drama
David Morrissey admits he had great affection for his character in The City & The City and missed him once filming concluded.

"I really liked him a lot and the idea that he was a man at odds with both the worlds he was trying to find himself in. He was lost really and I had great affection for that."

David explains how he became involved with the project and the premise behind a unique drama.

"I have known Tony Grisoni for a long time, he was the writer of Red Riding which I was in a number of years ago, and about two years ago he told me he was writing an adaptation of China Miéville's book The City & The City. I knew the book and I thought it was great that he was doing it but I was slightly taken aback because the book is an amazing story, it is a wonderful world that China creates but I thought ‘how are you going to bring that to the screen?’

"Eighteen months later I got sent the script with a letter from Tony and the director, Tom Shankland, saying we would love you to play the lead, Inspector Tyador Borlú, and when I read the script I thought it was fantastic. I still had big questions about how they were going to realise this strange and wonderful word that China had created.

"Tom talked me through his ideas and concepts and his design board and photographs... I think he is a wonderful director and one I have wanted to work with for a long time and so I said yes. It was a real leap of faith but I loved the way Tom and his team have created these two worlds.

"The concept is strange, it is a detective story told in this city, which is actually two cities that share the same footprint, but there are very strict regulations about the fact that one city cannot see the other city’s populace, they can’t look there, they can’t acknowledge them or interact with them and that creates all sorts of strange rules. Inside there is a secret police force called Breach and they are there to make sure that nobody breaks those laws of interacting between the cities.

"I play a copper in one of the cities, Besźel, and a body is discovered there and a girl has been murdered. Over the course of the investigation we realise that she may have been murdered in the other city and brought over so I have to go over to Ul Qoma, and find out what has happened to this girl. So it is a fish out of water tale, it is a man who has to go into another city and abide by their rules even though he is not used to that. The audience will have to get used to the rules but once they do, there is something quite fun about seeing how these two worlds are realised."

And what drew David to this character?

"He is a man living in a world in which he is very happy, as long as the rules are concerned, but he also has a real sense of loss about him. Something has happened to him in the past and it has closed him off and really thrown him. He is quite a locked up person and during the investigation, the thing that is really torturing him starts to come back. So you realise that the case he is on has a deep, personal meaning to him. He is pursuing this girl’s killer but also his own past and trying to make sense of what has happened to him."

Borlú has working relationships with two policewomen, one in each city, played by Maria Schrader and Mandeep Dhillon.

"In his own world he has a junior colleague, Corwi, played by Mandeep, and that is a great relationship. She is very ballsy, cheeky, you feel she is trying to get him to lighten up and crack a smile. She challenges his view of the world and he grows to be very fond of her.

"When he goes into the other world he has to become subordinate to another police officer called Dhatt and she is the boss. Ul Qoma is a very militarised world, there are lots of guns, their uniforms are very military and so he has to abide by her rules and play second fiddle, which he finds very difficult. But I loved working with both of them; they were fantastic, very different actresses in a way but both really great to work with."

Filming in his hometown of Liverpool was a great experience for David.

"We filmed totally in Liverpool and Manchester. I have filmed a lot in that region and in both cities. I am from Liverpool so my affection for Liverpool is deep rooted. It was wonderful to work there and see the city in good shape, to see those great, old building which have been restored, you can see the history of the city being preserved and then this whole new modern city being built around it as well so it felt very vibrant and wonderful to be back there. Manchester is a city I have worked in many times and I love it. Again, from an architectural point of view it worked brilliantly for us and the people were very accommodating."

Was there anything that proved particularly challenging for David during filming?

"The challenge was the schedule because I was in almost every scene. But that is what the crew have to do so you don’t moan you just get on with it. I really miss my colleagues and the working environment. On this project it was a really close-knit group of people and we all got on very well and I loved it.

"Towards the end of the third episode my character gets himself into a very emotional place and he starts to unravel very badly. That whole section and the end of the series was very emotional so the end of episodes three and four were the two things I remember as being quite gruelling from a physical point of view as well as anything else."

And will city dwelling audiences find this story relevant to their lives today?

"There is a massive relevance… here is a story about one group of people living in a city who are denying the existence of another group of people living in the same city. The conceit is that what China has done is say that it is a different city completely but I think we don’t have to look too far in our major cities to see how people have ghettoised themselves or are living in gated communities and we walk passed people begging and sleeping on the streets and we have become blind to that. We see people in our very own streets living in terrible conditions and we have decided to ignore it and our eyes are turned down.

"We are more and more on our screens and in denial about the world around us and I think The City & The City is taking that type of modern notion and accentuating it to a heightened level but I don’t think it is too far a stretch of the imagination from how we live in our cities today."