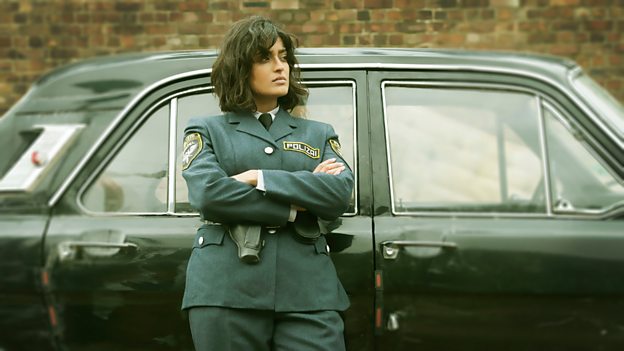 There was one moment, early on in rehearsals when David was singing a Beyoncé song to himself and I overheard him. It was from that moment onwards I knew we would be friends.Mandeep Dhillon

Category: BBC Two; Drama
Mandeep Dhillon reveals how The City & The City is unlike any crime drama that has come before it.

"This series is like nothing I have ever read or seen before, especially for a crime drama. The world it is set in blew my mind. The story is set within two separate cities with their own distinct customs and when a crime takes place, the detectives have to investigate this without violating the taboos of their society. It is difficult because they cannot breach, which means they can’t look over to the other side, the other city. This proves extremely difficult with this specific investigation because a murder occurs in one city but the body turns up in the other and for a police officer working in one of the cities that is really tricky. For the people inhabiting these societies it is crazy but for those of us who are investigating crimes like these where we can’t even look at certain things, it is extremely difficult."

Mandeep believes The City & The City will raise a number of questions in viewers' minds...

"As a viewer you always want to try and work everything out before the end. This drama is different because it also raises so many questions about our real world without us even realising. I don’t think anything like this has ever been done.

"It is about what you choose to see and unsee. The children in the drama, when they are born, can see both cities. They are then trained at school to see only their own city. We do this in everyday life; I might walk past someone selling something on the street and if I am in a hurry, I may choose to actively unsee that person by not looking at them, or you can walk past a homeless person and choose to see them and stop to give them some money. That may be a question that is in the back of people’s minds whilst they watch this, what we choose to see and unsee. I am excited for audiences to see that and for them to check in for a minute and think to themselves, do I do that in my day-to-day life?"

Describing her character, Mandeep explains why Constable Corwi, is a ‘dream role’.

"Corwi is Borlú's (David Morrissey) right hand lady throughout this murder investigation. She has his back completely and is as desperate as he is to find out the truth. She is pretty extraordinary as a person, she has a very bad potty mouth and so she swears like no one’s business and she is very ballsy which I love about her. She even puts Borlú in his place from time to time, which is really refreshing. She’s extremely good at her job and she couldn’t care less what other people think of her. She also has a big secret which is revealed at the end…"

As for Corwi’s bond with Borlú, Mandeep says; "It is a really nice relationship in a very weird way. They are two characters who are unlikely to get along but they really do.

"A lot of people are scared of Borlú, or intimidated by him so he is used to them stepping aside for him but Corwi is not intimidated and so is not afraid to tell him when he is being difficult. Borlú, is going through all sorts on top of the investigation my character is very aware of that. She acts like she doesn’t notice or care but she genuinely does because deep down she knows what he is going through.

"The two of them share a mutual respect for each other, it is really nice because it is like a relationship but not a romantic one. They easily could have gone there in the scripts but the fact that they didn't is brilliant because it shows that men and women can work together and be friends without being romantically involved. There are so many different emotions within their relationship but it is never sexual which was really nice to play."

Mandeep reveals what it was like working with David for the first time and what she has learned from him.

"There was one moment, early on in rehearsals when David was singing a Beyoncé song to himself and I overheard him. It was from that moment onwards I knew we would be friends - we had common ground. Aside from his great taste in music, he is an amazing actor. Having not had training myself, everything I learn is usually on the job and it was incredible just to watch David prepare for a scene. He would physically make himself feel sick in order to do so in the scene, it was amazing. I would just soak him in and I have learned a great deal from him. I will definitely take on some of his methods."

Mandeep reveals what makes this drama so compelling for her.

"It is a mind-bending crime drama which makes you question how you see the world and what you choose to unsee. It is a real page turner, you are desperate to know what happens next and to find out the truth. On top of that it is set in this amazing world with these interesting rules and regulations and something just doesn’t add up throughout the whole series and people will be itching to find out the end result."