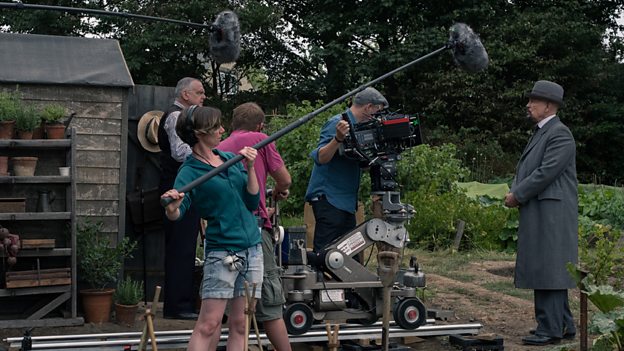 I think there is so much baggage around Poirot that it is quite useful for us to think of this as a new stand-alone title with a stand-alone detective hero, named Hercule.Damien Timmer

This is the fourth Agatha Christie adaptation that you have made with Sarah Phelps. What do you think is special about her approach to adaptation?

Sarah Phelps has great humanity and the darkest mind and the thing that is most often said about Agatha Christie productions is that they are slightly tongue-in-cheek murder mysteries but that is not how Sarah sees them. We have done three titles together before this one and we have been limbering up to the moment when Sarah Phelps takes on Hercule Poirot.

What makes Poirot ripe to bring back to the small screen?

In the world of 20th century detectives, Poirot really does stand-alone. He is so idiosyncratic and it is curious that there is a global fascination with him. I think the thing that makes him so fascinating is that he is so peculiar: all the things we know that make him tick, we all love an underdog and we love someone who is a square peg in a round hole and Poirot is a kind of perfectly symmetrical square peg in a perfectly symmetrical round hole. Poirot emerged fully formed in the first Agatha Christie story and from that point on he never really wavered.

What do you feel John Malkovich has brought to the role of Hercule Poirot?

It is that strange alchemy in that in the first instance we have Agatha Christie’s Hercule Poirot and then we also have Sarah Phelps’s reimagining of Hercule Poirot. Sarah has looked at The ABC Murders’, which is one of the great classical Agatha Christie stories, and extrapolated her Hercule Poirot, as he exists in that one story. She didn’t read other Poirot novels. Sarah made it very clear that we needed to call him Hercule, rather than Poirot, and talk about him as Hercule. I think there is so much baggage around Poirot that it is quite useful for us to think of this as a new stand-alone title with a stand-alone detective hero, named Hercule. We have these brilliant scripts from Sarah with a very clear sense of what she thinks makes Hercule tick. Watching John Malkovich reading Sarah’s lines at the read through, those lines that Agatha Christie whispered in Sarah’s ear, it just felt that something incredibly exciting was happening: this wonderful combination of Agatha Christie’s plot, Sarah Phelps’ words and John Malkovich’s extraordinary rendition of this character. I find that when I watch this I am not watching Poirot, I am watching Hercule and I really do feel that I am watching this character for the first time.

Can you tell us about the look that was created for Hercule Poirot?

We talked about the moustache a lot. We had very long meetings around a boardroom table talking about the shape of Hercules face, the chin, cheekbones and the size of the moustache to the millimetre. With the discussion of the beard we found to everyone’s surprise that everyone really liked the moustache and small beard combination. There were literally weeks where we discussed nothing apart from this very small thing.

What has Alex Gabassi (Director) brought to The ABC Murders and what was his vision?

When you have a new project and script that you love, you just hope that there is a director out there who is going to love it as much as you do and shape it into something even more extraordinary and we found that in Alex. We had admired Alex’s work for some time. He is a Brazilian director of great flare and had such charm, energy and excitement for The ABC Murders that he has breathed further verve into series.

The railway plays a huge role within this drama. What were the practical challenges of bringing this to screen?

Sarah made the importance of the railway network very clear as it links the country and links these crimes. Alex Gabassi came with these extraordinary mood boards with the railway network looking like a system of blood vesicles, that the country itself was a body and a crime scene. All these different towns and places connected by this awful serial killer led to all sorts of production challenges as we had to create more than a country house or a city. This story takes us all over the British Isles to various different bustling metropolises.

It has been said that these recent Agatha Christie adaptations are much darker in tone than adaptations we have seen in the past. How do you go about achieving that look?

We always start with the script and although Sarah has written three other adaptations of Agatha Christie stories before this I think this is unlike any of the others. It has a scale that none of the other scripts, or other Agatha Christie stories, have in that it is about a whole country. Sarah has simultaneously created this extraordinary scale whilst also staying focussed on the psychological journeys of a few key characters. The detail in which she unpicks Hercule is really thrilling. It is an incredibly nuanced, textured piece. There is so much glorious, evocative detail in the scripts it really does go to extraordinary places. It is both fun and heart breaking at times and it is also very ingenious and the wonderful thing is that somehow Alex Gabassi has managed to really bring that to life.

What were you looking for in this series in terms of the casting?

Casting an ensemble like this is like balancing an equation. We started with John Malkovich that gave it a very strong core and then the trick is to balance things around that starting point. Shirley Henderson gives such a detailed performance as does Eamon Farren, an extraordinary Australian actor who is making his British acting debut. As soon as we found Eamon it was hard to imagine anyone else for the role of Cust; he brings something very special to the character. We were thrilled to cast Rupert Grint. Rupert is so well known for past roles, and that comes with a bit of baggage, so perhaps it might have been seen as a real leap to have cast him as a senior policeman, but as soon as I saw his first costume and make-up tests and his first day of rushes we could see that he had inhabited that part so credibly and I think the double act of Rupert Grint and John Malkovich is one of the great surprises. They are just wonderful together.

What do you think it is about Christie’s work that lends itself to a very international television audience rather than just a British one?

Agatha Christie really is the queen of crime. She dominated 20th Century crime fiction the way no one else does. She had many rivals while writing in the 1930s, 1940s and 1950s but they do not cast the same shadow that Agatha Christie does. There is something lighting-in-a-bottle genius about her stories that place them at that time that is magic. The ABC Murders is one of her masterpieces, in my opinion. The sheer audacity of the premise, the dexterity she manages, the challenge she sets herself and cleverness in which she solves this very outlandish premise is actually brilliant. I knew that I wanted to create The ABC Murders right from when this generation of Agatha Christie titles was discussed. It stands out within the world of Poirot stories as particularly dazzling. I love the audaciousness of the premise and scale and it felt that there was an exciting way to tell the story in the 21st Century. And what an amazing privilege it has been.

What is it about Agatha Christie’s stories that makes them endure?

I don’t think you need to dig too deep to find the modern parallels of this story. It was published in early 1936, so Agatha Christie must have been writing in this at the beginning of 1935, which was a difficult and heady time for Britain and Europe. I do not think Sarah Phelps consciously set out to give this contemporary relevance; it is just there and it makes for all the more absorbing and pleasingly uncomfortable watch.

This is your fourth adaptation with Agatha Christie Ltd for BBC One. How has the working relationship been?

When I look back at the genesis of The ABC Murders as a television production, it is the relationship between Agatha Christie Limited and Mammoth Screen that makes this partnership really enjoyable. Both James Prichard and I have a great respect for Sarah Phelps and her adaptations; both in her respect for Agatha Christie’s work and our enjoyment of where she is going to take us on this journey.

If you had to describe The ABC Murders in one word what would it be?