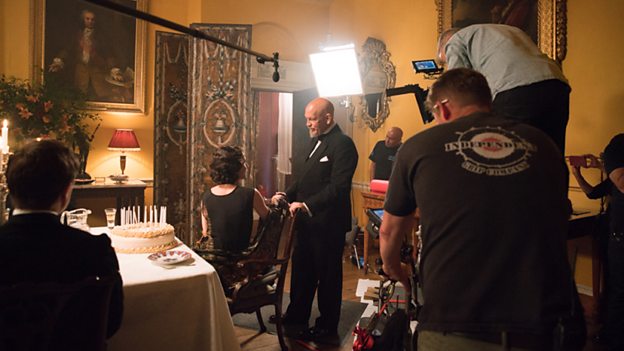 What Sarah does with the characters is extraordinary; she takes the pen portraits that my Great-Grandmother wrote and converts them into real flesh and blood, and I think that is one of the reasons why actors love these stories.James Prichard

There is clearly a process of how you select each story for the next adaptation: what was it that made you choose The ABC Murders?

We felt it was time to bring one of my Great-Grandmother’s most loved characters back onto television and so we were looking for a Poirot story. It had to be a novel that could hold up alongside these big stories we’ve told, and we honed in on The ABC Murders. It is one of the greatest plots and stories that she wrote and has a larger canvas than many of her other stories, in that it covers the whole of the United Kingdom. It’s not your traditional country house mystery.

Agatha Christie’s books were often thought of as ‘cosy crime’. When choosing the texts for adaptation are you actively looking for stories that clearly refute this notion?

Many people refer to my Great-Grandmother’s works, and those of her contemporaries, as ‘cosy crime’. I don’t believe there is any such thing as ‘cosy crime’ and I don’t think my Great-Grandmother thought that existed either. She definitely felt that murder was a horrible business and these weren’t parlour game puzzles to her. Nearly all of her murderers are punished and find justice in some way, shape or form and she thought that was very important. These adaptations have all been relatively dark and I think that darkness is in the original stories; creating these four adaptations with Sarah Phelps has really brought this darkness to light. What Sarah does with the characters is extraordinary; she takes the pen portraits that my Great-Grandmother wrote and converts them into real flesh and blood, and I think that is one of the reasons why actors love these stories.

Yet again this adaptation has attracted an amazing cast. What is it about the writing that brings such incredible actors to these projects?

I think that actors are naturally drawn to great stories and incredible characters. Hercule Poirot is an extraordinary character with an extraordinary history, but Sarah has also written other fantastic parts. There’s Crome, played by Rupert Grint, who has a very interesting journey and an extremely complex relationship with Hercule Poirot. Something that really comes through in this film is the chemistry between Grint as Crome and John Malkovich as Hercule Poirot. Alex Gabassi (Director) has also assembled a brilliant cast of character actors in Tara Fitzgerald, Andrew Buchan, Shirley Henderson and many others that tell the story in all its terrible glory.

You have talked before about maintaining the DNA of Christie. Can you tell us a little about what that means and how you achieve it?

We have this phrase that we use - The Christie Experience - and that is what we are looking for in our projects. We’re not looking for direct translations of the books; there has to be leeway for the writer to make changes in order for the process to work for other mediums. In the end, and particularly with this story, there is a path to follow but within that you need to add flesh. The show is three hours long and Christie’s novels themselves aren’t that long so details need fleshing out, explanation and characters need more backstory in order to create three hours of television. At the end of the day these are murder mysteries and the reader/viewer needs to find out who the killer is. If you’re not asking yourself that question all the way through then we’ve done something wrong. Hopefully in The ABC Murders you will be asking yourself that question.

Christie has a global fan base and you must have to make some difficult decisions through the adaptation process of what elements to change. How do you make those choices?

I start from the place of being a fan, so I don’t find it hard to put myself in the shoes of the fans that might find some of the changes we make difficult. But however close you want to keep to the text there are things that simply don’t work on screen that work on the page. From there on in you have to have faith in your creative team, it is incredibly important to trust them to do the job ahead to the best of their ability. We absolutely have that trust in Sarah Phelps, but that doesn’t mean we don’t discuss and debate throughout the process -but she is an incredibly talented writer and she always delivers.

What has Alex Gabassi (Director) brought to the show and what was it about him that convinced you he was the right person to direct The ABC Murders?

I think Alex has brought an extraordinary attention to detail to the show and being Brazilian naturally puts a very different perspective on the drama. This is a very British story and my Great-Grandmother was a very British writer, but it is also a tale about Poirot being an outsider, and I think to have a non-British director at the helm of such an acclaimed story with such an iconic character is a really interesting twist.

Who is the Hercule Poirot that we are going to see and what is it that you think audiences will take from this particular adaptation?

I went back and re-read the novel after reading the script and I began to look at the novel in a different way. The Hercule Poirot depicted in this story is the Poirot from the book. I know it’s a relatively early Poirot in some respects, but the theme of the book is an ageing Poirot and whether or not he is ‘losing it’; that’s something Sarah has built on. The book portrays Hercule Poirot as human and very fragile and that comes through. One of the great advantages of doing this as a one-off drama is that there is no pressure to create a brand new Poirot who will go through 70 different stories.

Many incredible actors have taken on the role of Hercule Poirot over the years. What was it that you were looking for when casting this particular version of the character?

We have been so very lucky over the years to have some incredible actors play the part of Hercule Poirot: Peter Ustinov, Albert Finney, David Suchet, Kenneth Branagh and now John Malkovich. Of course there are key differences to this portrayal of Poirot but essentially he has the same idiosyncrasies and vanities. I think there is something in the core of Poirot that makes him Poirot and I think that John has absolutely got into what that is.

The railway plays a huge part in the story and it takes the audience across the country. Was that something that was worrying to try to achieve or something you were excited about?

One of the things you get in Agatha Christie stories is variety. A lot of the stories are set in very enclosed spaces. In And Then There Were None you have the island and you have others that are set in country houses and they only work with a tight cast of people. One of the fascinating things about this story is that it is a serial killer story. In fact, there was no term for serial killers in this era. Technically, the killer could have been any member of the entire population of the UK; it is not one of those stories where it could only be one of the ten or twelve people sat inside the country house. Now that has its own challenges and requires a different kind of detection and a different kind of story telling.

Agatha Christie is a very British icon but her novels are popular the world over. What is it about her legacy that has turned Agatha Christie Ltd into a global company?

Agatha Christie does have extraordinary enduring appeal and for me it’s down to one simple thing: the stories. They cross boundaries, they cross time, nationalities and they can be easily translated; they can be set in different periods without altering the DNA of the story. I think that she had a genius for plots. She wrote 66 full-length novels, around 150 short stories and 25 plays and they are all unique and they are all extraordinary. The thing that has made so enduring is her incredible ability to tell a story that challenges and holds people.

What is it about your partnership with Mammoth Screen that makes them a good fit?

We have worked with Damien Timmer and the team at Mammoth Screen for a long time now and this is the fourth drama we have made together for the BBC. One of the things my father taught me in business is that you choose your partners, trust them and keep on working with them if you can. We have an incredible working relationship with Mammoth Screen; every now and again something will niggle me and I will ring Mammoth and we are always on the same page. That is so reassuring. Damien has both an incredible affinity with television and is also a massive fan of Agatha Christie. He has an encyclopaedic knowledge of my Great-Grandmother’s stories and that helps because he is coming from a place of fandom and respect for her work.

What is it about the character Poirot that audiences love?

The role of the detective in literature has always been a fascinating one and many authors have created some fantastic detectives. Agatha Christie had two main detectives, Hercule Poirot and Miss Marple. I used to think of Poirot as a cypher; an almost characterless brain who was there to move the plot along. One of the things that fascinates me about this story is how Sarah Phelps and John Malkovich have made him a little bit more human. Since returning to the books I’ve found that his humanity has always been there and was possibly slightly forgotten about. Poirot is a fascinating individual. One of the great things about my Great-Grandmother’s stories is that she didn’t tell us much about him. If you look at his timeline he first appears in a novel in 1920 and he last appeared in a novel in 1977. He has quirks, he is not always likeable but you have to respect him, and I think you have to love him a little, that’s something that Sarah and John have created here. That is something that works and that is what audiences have reacted to over all these years.

Can you sum up this show in one word?

I think complex. It is an incredibly complex story with a raft of characters and places and a case that Poirot really battles with.