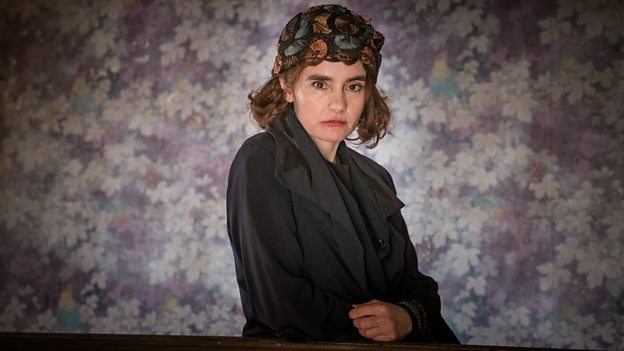 I like that there was a darkness running beneath the functioning of normal life. There are things to discover about Rose that were not immediately on the page.Shirley Henderson

Can you tell us a little bit about Rose and where we first find her in the story?

Rose Marbury runs a boarding house in Kings Cross, London. How long she’s been there I don’t know, but I think it’s been a while. It’s very run down and a bit sad and I think there is a sadness underlying her life. We are first introduced to her when Cust arrives on her doorstep to rent a room from her. Rose Marbury is complex. I think she’s got problems, she’s got her own problems but she is trying to run this boarding house. When Cust arrives she takes him through the house and introduces him to his shoddy room and, in a round about way, offers up that there are other services available in this house in addition to just bed and board. She’s offering up her daughter as a prostitute.

What was it about Sarah Phelps’ script that drew you to this project?

There are lots of things that I like about Sarah Phelps’ script and her adaptation of The ABC Murders. I like that there was a darkness running beneath the functioning of normal life. There are things to discover about Rose that were not immediately on the page. There are tiny little clues. It’s a small part but I felt there was enough there for me to draw something interesting for me to play with. I think Rose has a drink problem, which Sarah only hinted at but we developed as we needed a way of believing why her life is at such a stale point. Rose thinks she looks quite attractive but there is a distortion present through years of being locked away in this boarding house.

Rose’s relationship with Lily has become quite violent. I think it’s a split thing. There’s love there but something is festering away that is distorting it; possibly alcohol or it’s possibly jealousy. It’s not that Rose’s life is necessarily coming. So they’ve got a very distorted relationship. It shouldn’t be like that but it is like that. I think Rose needs Lily hugely, more than Lily needs Rose. Rose’s relationship with Lily is rotting. It is full of evil. The things that Rose is trying to get her daughter to do… there is a real badness there. However we have gotten to this point, I have to believe that Rose didn’t mean to start off this way.

This story was written between the Wars. What do you feel is reflected in this script about that time?

I think in the 1930s, when this story is set, elements are missing from society like men, stability and jobs. It’s different for each character as the other characters’ stories are much more hopeful. There are things on the horizon for them to look forward to but for Rose, it’s come to a dead end. Where do you go from this? There is nobody around to help her. She doesn’t seem to have any friends. I don’t think we can comprehend the scarcity of items back then that we now take for granted, we can read books about it but we can’t comprehend that the basics in life were hard to come by.

Sarah has really gone back to the original text and brought forward some of the really dark elements. Were you surprised that this is an Agatha Christie when you read it?

I’m not surprised it’s an Agatha Christie. I have done Christie adaptations before but I think Sarah has looked at it in a slightly different way. She’s looked for the darkness and allowed her imagination to run a bit further with it and there’s merit in that. This is her version, her take on it. You’ve got the prettiness of a certain life but underneath that there is something else; greed, great greed and distrust. My character (Rose) in the book is very different from what she has written. That is a given. But that’s what she’s written and it’s nice and I like it.

Talking about the physical space that Rose inhabits, can you talk a little but about the Marbury Boarding House and what it’s been like to work on that set?

Marbury Boarding House is rotten to the core. It’s mouldy and it’s tired, I think it’s crawling in stickiness and sweat. I think that Rose morphs into the wallpaper quite easily and you wouldn’t even know she’s standing in the hallway. But with that you want more, you always want to look at the dirty things in life, we can’t help ourselves; it’s human nature. The wallpaper that they’re using is beautiful but they’ve distorted everything and made it feel all dark and mucky. It just feels sticky to me, it feels like a million people have walked through this and nobody has ever bothered to clean it. Lives have come and gone. It feels like maybe her husband died there and that’s why she is there on her own but who knows. It’s just crawling.

How has it been for you working with director Alex Gabassi?

I’ve really loved working with Alex Gabassi. He just lets it run, he doesn’t jump in and over dictate or over direct, he lets you play a bit and it allows you a little bit of freedom to try things. Obviously, time is against you in television, you only get a few times to do it. Sometimes just one time to do it! But I don’t mind that.

What did you think when you heard that John Malkovich had been cast as Hercule Poirot?

Well you can only love John Malkovich because he’s done so much wonderful stuff and you can only want to work with him. I only have one tiny bit with him but it felt electric. He’s got that great stillness and you just feel that you are getting complete truth when he is looking at you. He’s very easy going and that’s what I like, there’s no starriness he’s just comfortable to sit and hang about with. I’m amazed to have had the opportunity to work with him on this.

Is there a word that has come to you through this process to sum up this programme?

The only word is festering.

Do you personally enjoy the murder mystery genre?

I love crime murder mystery; books, television I love it.

I don’t know why Agatha Christie translates so well to different medium. It’s just the whodunnit thing, you want the answer and will you get the answer? In real crime there isn’t always an answer and you’re left dissatisfied but in a drama there will be an answer! I like that there are lots of characters. I like ensemble things and that once you’ve had enough of that character you’re onto the next and then you’re back to that one and could it be that, then they build it up and it just plays with your emotions.

You mentioned the look earlier and it would be great to go into a bit more detail about conversations you had with the creative team about the look. Were there specific conversations about things that you wanted to see?

Yes. Sam Marshall (Hair and Make-up Designer) was game for anything and we just played around. We didn’t have much time but we needed to find something with the hair; we tried a few things and we liked the colour on me, we thought it was an interesting colour. I liked the idea that she was quite pale; like she’s never outside of the boarding house she just sits there year after year. I like that idea, that if alcohol is involved, then things are slightly out, the slightly exaggerated cheeks and lips but to her she looks pretty. It’s maybe a look that she had when she was younger and is now just slightly exaggerated. A look that once was in its place but now is a bit smudged and a bit messy. I liked the idea that she’s been kissed, probably not for a long time, but I like that the lipstick is smudged like she’s just been kissed. She hasn’t but I just liked the feeling. You’re just looking for clues really and this is what we came up with!

And the costume - can you tell us a little bit about that process?

Lindsay Pugh, the Costume Designer, was exactly the same. In fact, I only tried on one thing as it was the first look that we chose. We didn’t go through a whole load of different things, we just had a discussion that in Sarah’s script it was written a little more gossipy and flowery and a little more upbeat but I thought if we could run something darker alongside that then the combination of them both would be good. I like the idea that she could disappear into the wallpaper and you can do that if there is darkness, you can just fade away.

You are re-united with a past Harry Potter mate, Rupert Grint, do you have many scenes together?

Yes, Rupert Grint is in this. The last time I saw Rupert he must have been about ten years old but he still looks exactly the same to me! He’s lovely, very friendly. I only have a tiny passing bit with him but that was enough. He’s a grown man now!