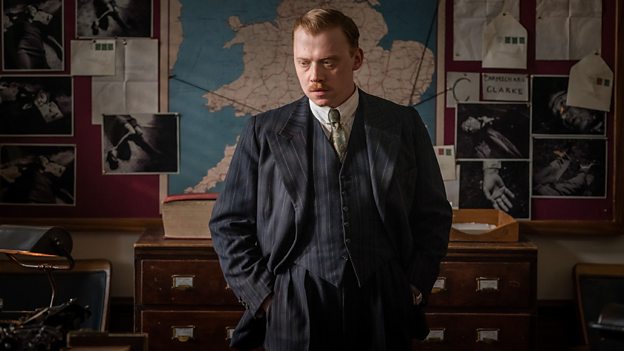 I wasn’t expecting or ready for the brutal realism that Sarah has brought to it. It’s quite powerful.Rupert Grint

Category: BBC One; Drama
Poirot is back on our television screens, in a new adaptation of one of his most exhilarating cases. Widely regarded as one of Agatha Christie’s best mysteries, The ABC Murders is one of the most surprising and unusual appearances by literature’s most famous detective.

Can you tell us a bit about Inspector Crome? Who is he and where do we meet him in the story?

Crome is the Chief Inspector at Scotland Yard and he’s newly appointed. He’s slightly insecure about his new position. He’s a young man who feels that he isn’t experienced enough and so he puts on this front; he’s constantly trying to prove himself. We first meet Crome when Poirot seeks his help investigating a potential murder in Andover. Crome loathes Poirot and feels real animosity towards him. Crome feels that, his good friend and mentor Inspector Japp, was dismissed because of a misguided loyalty to Poirot and that Poirot is solely to blame for that. Their first meeting is very frosty. Crome is quite a cold character when we first meet him.

Can you tell me a bit more detail about that first meeting?

It’s an interesting scene as it’s a real reversal of roles for Poirot and I don’t think we’ve ever seen him in that position. It’s a painful, almost humiliating interaction between them and Crome really knows which buttons to push and how to make it even more excruciating for Poirot who is left bewildered. Crome is constantly trying to dismiss and demean him. There is a line where I say "you appear to be melting" and it’s a real attack of words on Poirot. Crome is not very likeable at the beginning! It’s quite an uncomfortable scene.

Sarah Phelps has a way of drawing out life’s cruelties. She makes these scenes feel very real and raw, and she manages to bring out little details of Christie’s characters that we might not have paid much attention to before. What was it that drew you to the character of Crome?

I found him really interesting. Crome fascinated me when I was reading the script. Originally, I think he was a much older character, so this new twist of him being young and in bigger shoes than he should be, is an interesting dynamic. He tries to hang onto his dwindling sense of bravado but it’s a thin veil that you see slip as the story goes on. Crome’s relationship with Poirot is an interesting one as it develops throughout.

It feels like he is trying to be older than he is. The suit, the moustache… are these things that you brought into the character to try and give us that impression?

All of that certainly helped me and how he looks is a big part of Crome. The moustache was definitely something that I wanted to have a go at myself. I thought it was going to be quite difficult but it actually didn’t take too long although it is quite thin and very light but I think it’s kind of a juvenile part of him. I think the costume really helped. Although I’m wearing so many clothes, including this big coat, and it can be so hot and not very comfortable, and high-waisted trousers are certainly something to get used to. The costume designer, Lindsay Pugh, has got such a great knowledge of this period and it makes such a difference. As soon as you get the hat and coat on it completely transports you to that period and you automatically sink into this world.

Were you surprised that this was an Agatha Christie? It’s pretty dark, very thrilling. How did you feel reading the script?

I had no previous experience with Christie and had never read an Agatha Christie novel or really seen much. The script was just really dark and that struck me. I wasn’t expecting or ready for the brutal realism that Sarah has brought to it. It’s quite powerful. We see physicality to Poirot; he’s just a real man and he’s vulnerable and it’s really interesting to see that side to him. The darkness of the murders is really quite graphic and it can be quite difficult to read. That’s what really struck me.

Sarah Phelps tends to really pin her stories to the time period and it feels like there is a bubbling tension. Is the 1930s a new period for you?

I love it. I’ve never worked in this period before and it’s such a great one. You get completely sucked into it. There are so many subtle touches with costume, design and storyline. The beat of the British Union of Fascists and the rising fascist mentality is very interesting. It’s never directly stated or made a big deal of but it’s always there bubbling under the surface of the script. With Poirot being from Belgium, it’s interesting to see that play out and it’s really quite relevant today.

Tell us about Crome’s story. Where is he, what is happening around him and what has he got to do?

Crome hasn’t been in his current position for long - we’re not quite sure how long - but it’s a new job. This series of brutal murders happens and it’s overwhelming. He doesn’t quite know what to do but initially he doesn’t want Poirot’s expertise, despite the fact that Poirot is actually helping him but he doesn’t want to see that. He belittles him. He very much wants to do this on his own. However, he’s always just missing the mark with his theories and so has to eventually succumb to the great Poirot. They work together and he becomes a mentor for Crome. Crome learns a lot from that partnership. It’s a bitter pill to swallow at the beginning but it’s interesting to see the way that turns it around.

So you’ve got a great script, a really interesting period; how did you feel when you heard that John Malkovich was going to be playing Poirot?

It was incredibly exciting to find out that John Malkovich was going to play Poirot. I’ve been a huge fan of his for such a long time. He’s almost got this mythical creature quality and so I didn’t really know what to expect but he’s just been amazing. I’ve always liked watching him. It just feels like such a perfect fit and it’s been great being on set with him. When I first got on set I couldn’t really make eye contact with him and in my first scene it was actually quite distracting as every time I looked at him I thought ‘oh yeah, that’s John Malkovich’ and so you kind of have to fight against that! He’s incredible. He’s just got this presence that does something quite special to a room. It’s just very exciting that he’s part of this. He’s quite selfless and knows where the camera is at all times. He is very aware of that and what shots work. It’s quite astonishing to watch.

You have been reunited with Shirley Henderson - a Harry Potter co-star - what was it like to be back on set with Shirley?

It was lovely! I’ve always loved Shirley and she’s long been one of my favourites. It has been a long time since we worked together - we worked out that it must have been 2005 when we last saw each other. It was so lovely to see her - a familiar face is always nice on a set.

How has it been working with Alex Gabassi and what things have you found to be unique in his style or useful to you as an actor?

Alex Gabassi is brilliant and I loved working with him, he was open to trying things and I really like having that freedom, it makes working much easier. But at the same time, he has such an eye for detail, particularly with the set. I remember the first day I was in we were doing this scene and we had to go again because a lamp was slightly off skew. It’s really interesting seeing how he shoots depending on what environment we are in. When we were in Newby Hall there were a lot of stoic shots and he is very good at filming in a way that suits the location that is really cool.

What sorts of feelings do you think the drama will evoke in the audience?

There is definitely a kind of growing suspense that is intensely claustrophobic and which leaves you feeling quite helpless. You don’t really know where it’s going. We have no idea who or why this is happening. There is something quite sinister about that. It does feel like it’s gradually closing in and can be quite suffocating at times which will be interesting to see play out.

Who does Crome think it is?

Crome’s theories differ a lot. He originally thinks it’s a deranged sexual pervert who is only after women. He struggles to really hone in on what the pattern is until he teams up with Poirot and he realises that Poirot is actually the link and the key to solving the case. Crome is suspicious of everyone, which makes things quite difficult. It’s a learning process for Crome.

The railway network is like the veins of the country and the murderer is sending their poison through the veins. Have you had any scenes on the train?

I’ve had a bit of train action. It was nice as I’ve had some experience of a bit of train action before, and actually I think at a similar location! It’s amazing and very atmospheric being on the platform and it transports you back to a completely different time. That scene was where we almost catch a suspect after the murder of a railway worker and a chase ensues across tracks and through tunnels which was quite a challenge as I’m not a natural runner!

You have been on so many locations and so many sets, but when you’re here on a railway track are you right there in the moment? Does it help not to be on a set?

I think being in this period really helps you as there are so many different layers and you can really lose yourself in it and just escape into this world. It’s quite thrilling. Especially scenes like that, running down the tracks and I have an army of policemen behind me in all the old uniforms is amazing, it’s really good fun.

We are asking cast for single words that sum up the show. Do you have a word that has been coming to you through this production?

The word ‘Malkovich’ comes to mind! Grotesque is interesting and so is festering but I like the word pustule too. We filmed a scene with a character called Threadgold and he has these repulsive pustule boils on the back of his neck which look like they’re going to blow at any moment and I think there is a really cool scene where Cust is eating his breakfast, he’s eating this egg and looking at this spot and it’s really gross. It kind of sets the tone and it’s very brutal and honest. So yes: pustule.

What do you think makes this show interesting to a modern audience?

It does have a very modern feel although it’s set in this very distinctive period it could almost be any time really. Not knowing a lot about Agatha Christie or previous versions, it’s hard to comment, but it feels like a very fresh look at Poirot and this world. It’s very exciting.