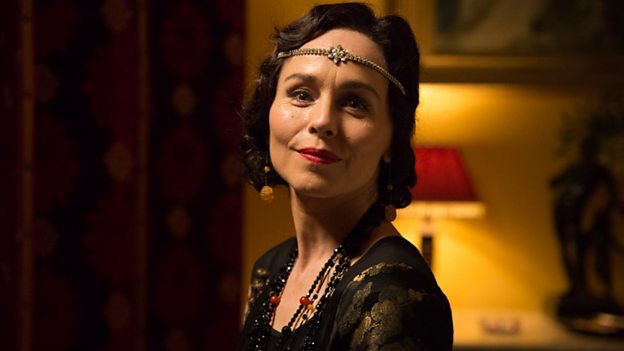 You totally believe the machinations of his mind are whirring and not stopping, that he will find the killer.Tara Fitzgerald

What drew you to the script?

I’ve always loved Christie and read And Then There Were None when I was about 12 years. I adored her on first reading, and felt like it was the first grown up book I’d read, just incredibly involving.

We’ve seen many adaptations in the past, how does this compare?

Sarah Phelps is so clever, because she dives right in and seems to reinterpret the novels but not in an overly reverential way. She allows Christie to get her hands dirty with her detectives. This version of Poirot feels very fresh. Again, without really taking any liberties, Sarah has managed to extrapolate something new and focus on a sense of his own personal baggage and his past. The idea of being unwanted perhaps in the way he feels himself to be, which helps him identify with those characters in society that he is stalking, or chasing after. The theme of immigration is there quite strongly which makes it feel very pertinent and very relevant for all the reasons we understand today. So, it feels immensely vital as well as a form of retelling, or reframing let’s say and brilliant for that reason.

Who is Lady Hermione, and how does she fit in to this story?

Lady Hermione Clark is part of the landed gentry. She’s very ill with a terminal disease, cancer, and she is married to Carmichael. They’re childless, they have for all intents and purposes adopted this character in Thora, who arrives as an orphan and takes on a secretarial position but then creates some deep problems, a fissure in their marriage. So that doesn’t help things. She knows she’s dying and she’s terrified. Despite being frightened I suppose to some extent accepting. But one of her fears is that Thora will get her hands on her husband and/or possibly in to her brother-in-law Franklin. I think her dying wish is to make sure it doesn’t happen.

How has it been filming? What was the feeling like on set?

The feeling of production, cast and crew working together on the set felt very alive, very fluid. Alex Gabassi is a great director and somehow seems to bring this freshness in imagery and ideas to what is a very tried and tested formula. Maybe similar in the way to Ang Lee where you get the outsider’s perspective. Which again slightly mirrors Poirot and brings a new sensibility, understanding and viewpoint which is intriguing.

What’s it been like working with John? What does he bring to the role of Poirot?

John Malkovich is a legend. I mean he just is, so there’s that for starters. I think it’s an inspired piece of casting and delightful he’s felt inspired to do it. He has this mystery and this intelligence and this relaxed way about him. You totally believe the machinations of his mind are whirring and not stopping, that he will find the killer.

What was it about Sarah’s script that gave you a real sense of Hermione, and what drew you to it?

Sarah cleverly crafts each character and fills them out. Lady Hermione reminds me a little bit of women I’ve known throughout my life so to access her I didn’t have to reach too far. Then when it comes to Sarah’s actual dialogue, the words that you speak, again feel very immediate and again irreverent in the best way so it’s almost as if she’s not been constrained by her times. Sarah launches the characters and she absolutely allows for you to go and find the rest. Having given you all the notations that you need. So that’s quite thrilling.

What words spring to mind when describing this drama?

I actually have this word, which I thought was so great just as a single word, which is gimlet. Because you use the phrase gimlet-eyed and that means very keen eyed but a gimlet is actually a tool that drills into things, it penetrates. I thought that was a good word. But it’s also a cocktail on the flip side so it’s a naughty drink and for the period as well which is a time of cocktails. Gimlet is my word for this.

The time period The ABC Murders is set in feels very real and relevant today, do think audiences will agree?

I think audiences will really relate to this story. There are themes of ageism, of being washed-up/a has-been and a real lack of respect for people who have lived through horrors, and what they might have endure. Some people have seen things that mankind should never see and perhaps it’s a salient reminder. It’s clever, Sarah doesn’t hit you on the head with this stuff and it’s important that she doesn’t. It’s very delicately done but it’s very moving as well, there’s real pathos in there. You really feel for Poirot. He’s not just brilliant, he’s not just this rapier, he has this sad story and he’s overcome a lot of difficulties.