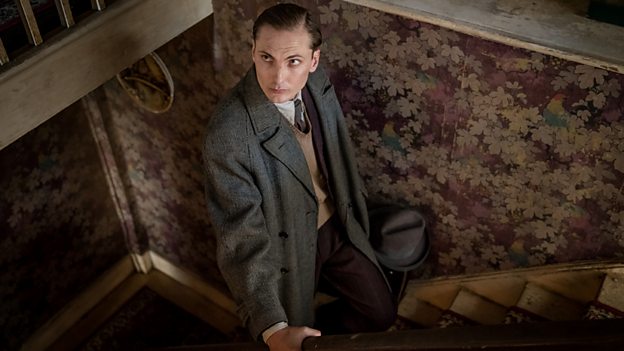 It’s very easy to play a horrible person or someone who doesn’t have any redeeming qualities but what’s more interesting is to think about why he is there and what that does to someone’s mind.Eamon Farren

How did this part come about for you?

When I first got the script - I actually auditioned for another character - but when I got the script I rang my agent and asked if I could audition for the role of Cust. My agent said they weren’t there yet so I went in for a different part but luckily it came back around.

Can you tell us a bit about Cust?

Mr Cust is a young man that we meet at the train station. He’s obviously arriving from somewhere else; he’s got everything, all his worldly possessions with him. It’s very obvious from the beginning that he’s got lots of issues going on, he doesn’t look well, he’s a little bit lost in the world and he arrives in this boarding house with Mrs Rose Marbury and sets up a new life. That’s our main interaction to Mr Cust, that he’s setting up this new life and a clean slate. What we know of him - we get little hints throughout the piece - but essentially what we are told is that he used to be a gambler, a good gambler, and used to earn a lot of good money doing that, that is how he made his way in the world but it comes apparent very quickly that is no longer and he is in the process of picking himself up and trying to dust himself off while fighting the demons that are plaguing him and wants to make his mark on the world.

Sarah Phelps puts lots of meat on the bones, what was it for you that made you want to get involved when reading these scripts?

I think that Sarah Phelps is a writer that, when you read her scripts, it’s immediately obvious that she is a writer that is very much into humanity and the human behaviour. As an actor, when you read the scripts, the action and the descriptions of the characters are very detailed, so it really is all on the page. She gives you so much to work with. It’s exciting as an actor to read a script like that because there are ambiguities left for your own ideas or your own imprint on the character but there really is a lot there to play with. Sometimes that’s one of the most exciting things for a script because you read something that is very detailed, very gritty, the range of things that every character - not just mine - but every character has such a range that you just want to get in there and get your hands dirty like she has with her writing. It’s so exciting. When I first read the scripts, not just my character but the world itself is so rich, diverse and so messy that you just want to jump in and play around in it.

I’ve read a couple of Agatha Christie stories in the past but not nearly enough. I’ve seen The Mousetrap in London and in Australia and that was my first real Christie experience, apart from a couple of books I read when I was quite young. I read The ABC Murders after the script and in that you really get an understanding of how important Christie is to the world of literature. At the very heart of it she understood how interesting human behaviour is and how interesting it is to explore why people do the things they do and why they treat each other the way that they do. Sarah Phelps takes Christie’s work and moves it into our world and adds to it. She holds the reverence for what Christie has done but she also gives it a fresh take in a way that still maintains the foundation and the heart of everything that Christie did but she also imbues it with, what we know of drama today. I think that combination is really powerful.

Describe Cust’s world and where he has found himself? When we meet him he’s on the platform with all his worldly possessions looking to start anew, what was it that you wanted to bring to that character?

When I first read the script I immediately felt that it was such a visceral world and the characters are so visceral themselves that I felt from Cust that he is a man at the pit of his very existence. He’s been through some experiences or events that have taken everything away from him. He is a broken and empty man and I felt that very powerfully in Sarah’s writing. I loved the idea of exploring someone who has nothing. He’s not seen nor heard and doesn’t have a place in the world. That is dark and very bleak. Within beauty there is always darkness and because of that, my job playing Cust is to find the beauty in his darkness and I love that. It’s very easy to play a horrible person or someone who doesn’t have any redeeming qualities but what’s more interesting is to think about why he is there and what that does to someone’s mind.

How did you prepare for the role or does Sarah write all the detail in the script?

There is a lot of detail that lies in the script and Sarah has done such a diligent job making sure that there is so much to work with on the page. Preparing for the role and talking to Alex and the costume and make up teams help also but I like to grab hold of it and find the character myself. In the script it is noted about how Cust is shot in some scenes. He is never shot from straight on, he’s always shot from an angle and I really love that idea and I wanted to take that into his physicality too. I like the fluidity of Cust which also means he can sometimes appear vulnerable but those are the moments that he is gaining his power.

Where does Cust fit in? We’re seeing everyone across this network of horrible murders. Where is Cust’s position within this gruesome map?

He’s at the epicentre. It’s interesting because it’s sort of a split storyline. We follow Hercule and his re-building and his re-birth and his struggle against the world and wanting to be seen and heard but we also travel, like the book, on a separate stream with Cust. He doesn’t interact with a lot of the other main characters apart from Lily and Rose and so within that for Cust, without knowing it at first, he is the epicentre of this horrible network of events. For a character to encounter the moment where they’re not sure where their place is in this world or they’re not sure of this reality and then start to think to themselves in this private moment that they could be the cause of this destruction is an amazing way to encounter the story.

What was it like to work with John Malkovich?

What was really cool about working with John is that our characters didn’t meet until towards the end of the story. Our scene holds a lot for us both as characters and actors and when we first sat down to discuss it both Alex and John were really generous. It was so great that I got to just hang out with John for a couple of hours and chat. When you grow up respecting an actor like John Malkovich and then you get to sit down with him.

What is the one word that you would use to describe this show?

The word I’ve been thinking of is grit. That is beautiful grit.