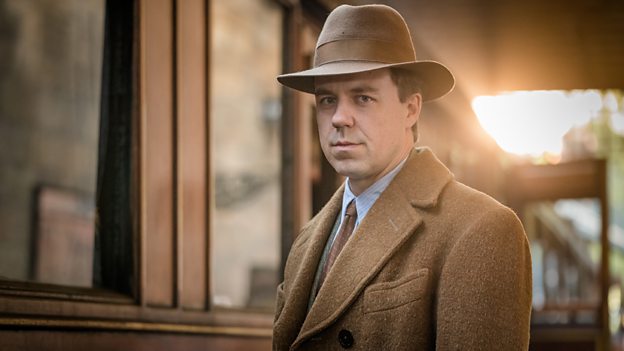 Franklin knows that Poirot is the best of the best and he won’t stop until it's resolved.Andrew Buchan

What was it about this project that made you want to be a part of it?

I have seen And Then There Were None and Ordeal by Innocence and I thought they were brilliant and there was something very hypnotising about them. It’s recreating the art of it and the beauty of it in a very stylised way. It wasn’t just creating pretty pictures; it was the grain running through it and the acting. With that in mind then coming to The ABC Murders, and what Sarah Phelps has written was and is brilliant.

Can you tell us about your character; who is Franklin Clarke?

Franklin Clarke is a very amiable, friendly guy who is the brother of Sir Carmichael Clarke. He lives at Combside with Sir Carmichael and his wife; Lady Hermione Clarke. They get on famously and it’s a nice tight-knit family atmosphere.

It’s the 1930s and there is that sense of tension in Britain post-war and Poirot is seen as a stranger; can you talk about where we are and where it is set?

It’s the 1930s post-war Britain and at this moment in time, in England, fascism is on the rise. There is underlying suspicion and a distinct mistrust of people from other countries. Hercule fits into that description and is on the receiving end of some quite unpleasant treatment and verbal abuse from passers-by; people he knows and all because he is Belgian. There is something desperately heart-breaking about this interpretation of Hercule Poirot. He’s not this energetic man, going about his detecting. Rather he’s a bit of a fallen angel and he’s sifting through the scraps of life. Being at the read-through sitting next to John it was magnificent to hear him lift Poirot off the page.

What is it like, to be on set with John Malkovich?

There is something ethereal about John. He’s a very intelligent man; a thinker and has a huge history of working in theatre and directing. He is a truly lovely man and going off the back of how it sounded in the read-through and on set I think we are probably in for a bit of a treat.

When people are casting, they think of Poirot as this iconic character, how did you feel when John Malkovich was cast?

When I heard that it was going to be John Malkovich obviously several thousand images flash through your head. The number is quite sizeable, be it Of Mice and Men or Les Liaisons Dangereuses and Burn After Reading, he was hilariously brilliant in that so you think ‘what is this guy going to be like?’ He lives in France and speaks French incredibly well but this is a Belgian accent and his is a very subtle delivery of it which is perfect. It’s a privilege to be working with him.

How does Franklin meet Poirot?

As the murders unfold and one is particularly close to home for Franklin, it becomes clear to Poirot that the killer is working his way through towns and names alphabetically. This young up-start Chief Inspector called Crome is handling the case and I don’t really feel like this guy is going about the investigation in the right way. Franklin has known Poirot for years from the mystery parties he used to attend and his distinctive reputation in solving crimes and mysteries. Crome is not asking the right questions or doing the right stuff and yet here is Poirot who is revered, so that’s why I approach him.

Who is Thora and what is Franklin’s relationship like with her?

Thora was brought into the house to work as staff, but is a girl who quite clearly wants to get ahead and has quite big ambitions in life. It feels like she will stop at nothing to get there, so she crosses a few boundaries with Carmichael.

Can you tell us about Franklin’s look?

Lindsay Pugh, the brilliant costume designer and who has done the 1930s before, has a very acute eye as to what is needed. I’ve played a plumber for about five years, very baggy jeans, quite a loose-fitting top so I said to her, "let’s just try and make some strides towards a suit, something that fits" and she started putting out tweed and as soon as I put it on I felt of the period and it helps you find the character. Also, I do like having the waves in my hair and it’s good to just introduce a flicker of something new.

How has it been working with Alex Gabassi the director?

Alex is not fazed by anything. He’s a man on top of his craft. It also seems like he knows what is contributing to the picture both as far as lighting, sound and other exterior stuff as well as acting. Every scene just looks like a masterpiece.

How would you briefly describe The ABC Murders?

In one word: Malkovich. Other than that: edgy, mysterious, dark, twisted.

Do you enjoy murder mystery as a genre yourself?

I like a show about serial killers or a good documentary about that stuff. I like stuff where you have to unpick details and try and guess who it is before everyone else.

Have there been any memorable moments that you will take away from this shoot?

I’d say yes, sitting in a rehearsal room not far from where I went to drama school, with John Malkovich.

As an actor, is going through all those elements of a personality satisfying to you?

Definitely: You want to include all shades, it is nice to see the difference between all the characters that you play. I think I always seem to play every man in a crisis, whereas Franklin Clarke is in a lovely house with a lovely family and it’s a very nice change for me.

How does the relationship with Poirot develop?

He approaches Poirot because he is a little bit miffed at how this young lad, Crome, is going about the case and he thinks he is leaving certain holes in the investigation and not going about it as thoroughly as he could. There is a friendship there between them and as Franklin goes to see him and enlists his help, from that there is a friendship. He admires Poirot a great deal as a lot of people do apart from this idiotic bunch of people who are hurling insults at him. Franklin knows that Poirot is the best of the best and he won’t stop until it's resolved.