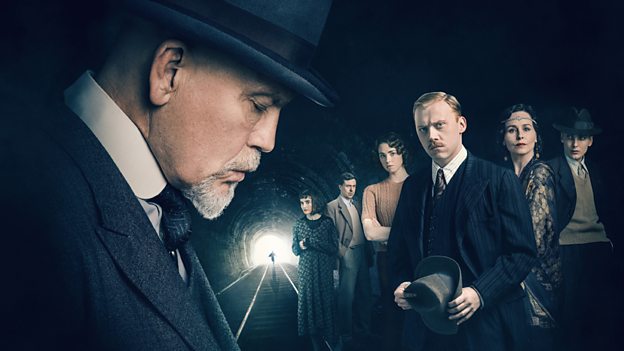 Category: BBC One; Drama
Poirot is back on our television screens, in a new adaptation of one of his most exhilarating cases. Widely regarded as one of Agatha Christie’s best mysteries, The ABC Murders is one of the most surprising and unusual appearances by literature’s most famous detective.

The year is 1933 and a killer stalks Britain, known only as A.B.C. They strike in a methodical pattern and leave a copy of the ABC railway guide at the scene of each of murder. As Poirot (John Malkovich) attempts to investigate he is thwarted on every front; by a police force that no longer trusts him, a public that no longer adores him, and an enemy determined to outsmart him. If Poirot is to match his most cunning nemesis everything about him will be called into question; his authority, his integrity, his past, his identity.

In her fourth Agatha Christie adaptation in conjunction with Agatha Christie Limited and Mammoth Screen, Bafta-nominated writer Sarah Phelps continues to explore the 20th century through the work of Britain’s greatest crime writer. This time it is the 1930s; a divided country where suspicion and hatred are on the rise, and the gap between wealth and poverty is great and growing greater.

In the midst of this we find Hercule Poirot and his little grey cells. Poirot has aged and the world has changed quickly around him. England, tolerant, welcoming England, squeezed by Depression, by the dark news from Germany, isn’t as tolerant and welcoming. The jubilation of winning the Great War has evaporated, now all there is, is a mess. Someone has to take the blame and sympathy for Displaced People has run out. As the British Union of Fascists gains ground, inveighing against ‘aliens’, Poirot feels even more like the outsider that he is. Even worse, he has been swept aside by the new brooms in the police and forgotten by the Bright Young Things whose dinner parties he entertained. But somebody has not forgotten him.

The A.B.C. killer travels the length and breadth of Britain to taunt Poirot. The ominous rumble of the train tracks connects every sinew of the country, every corner of opulence and poverty bound together. As Poirot tracks the killer across a riven, tense England, the case peels back the layers of the persona he’s created to survive in a foreign land, surrounded by strangers where the only person who seems to truly understand him, is the deranged, uncontrolled killer.

Hercule Poirot
The world-famous Belgian private detective who believes he has a debt to the dead. Despite his little grey cells becoming greyer and his popularity decreasing, his intelligence, determination and wit remain unrivalled.

Inspector Crome
The new broom at Scotland Yard. Young, upcoming and hot-headed but undoubtedly deserves to be where he is, despite what some of the older officers might think. He doesn’t have time for detectives of the past interfering with his cases.

Cust
A quiet recluse who resides at Marbury Boarding House as a base for his new venture in selling women’s stockings. He desperately searches for ways to ease his pain and suffering. He gives nothing away but he certainly has some bad habits.

Japp
An ex-police officer forced into retirement, respected by many in the force and a dear friend of Hercule’s. He now spends most of his time at his allotment.

Franklin Clarke
Franklin is caring, handsome and possesses a smile to melt your heart. He loves to gamble, whether it be with money or with the hearts of women. He is the brother of Sir Carmichael Clarke

Lady Hermione Clarke
A great admirer of Hercule Poirot. Ill, bed-ridden and jealous, she prefers to reminisce about the times when everyone was young and beautiful. She is the wife of Sir Carmichael Clarke.

Thora Grey
Astonishingly beautiful, composed and modest. She was adopted into the Clarke family as one of their own and has become very close with Sir Carmichael Clarke, a fact which has not gone unnoticed by others in the household.

Capstick
She has been a fiercely loyal servant to the Carmichaels for years. She distrusts Thora Grey and her intentions surrounding Sir Carmichael Clarke.

Betty Barnard
A sprightly and flirtatious Bexhill girl who gets what she wants from the men she desires. There’s a cold heart behind her warm smile and wicked tongue to match.

Megan Barnard
She’s stuck in a family that she doesn’t feel part of and has come to resent them. She’s kind and intelligent but her low self-esteem is her downfall, always ending up at the mercy of her sister, Betty or her ex-boyfriend, Donald.

Donald Fraser
The ex-boyfriend of Megan Barnard and fiancé of her sister, Betty. He’s charming, self-centred and doted on by Betty and Megan’s mother.

Lily Marbury
The unloved daughter of Rose Marbury who lives with her mother at Marbury Boarding House. She is well acquainted with certain guests who are willing to pay thanks to her mother. She has a kind heart some may mistake for naivety.

Rose Marbury
The owner of Marbury Boarding House, she takes no prisoners especially amongst her guests. Her daughter, Lily, finds herself at the end of Rose’s drunken outbursts.

Peter Asher
The husband of Alice Asher, who owns the local shop in Andover. A burly alcoholic who seeks comfort at the bottom of a bottle after nasty arguments with his wife.

Alice Asher
The cantankerous owner of the local Andover shop who often squabbles with her husband, Peter. Her sharp tongue and cold demeanour drive away the few customers she has.

Sir Carmichael Clarke
Gentle, patrician, curious and kind. The only thing he loves more than his family is his dog, Wilbur.

Sidney Prynne
Loud, fast-talking Northern businessman who is coming apart at the seams. He works in ladies’ stockings and loves the sound of his own voice.

Dexter Dooley
An animated, plump entertainer and ventriloquist. He has thinning hair, a pencil moustache, spiv style and a sallow face. He is late 40s and feels every second of it.