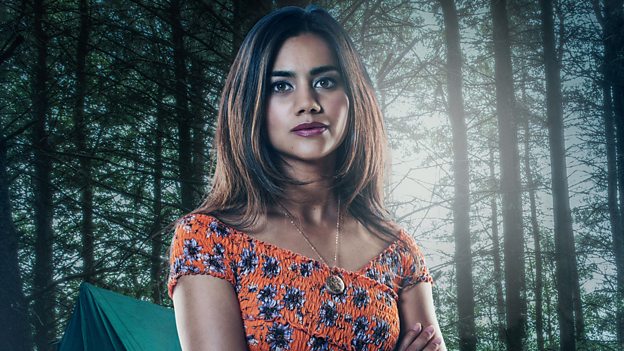 I read all 13 episodes in one go in one night and I just thought it was so well written.Lisa Ambalavanar

What attracted you to the character of Mia?
She’s a really strong person - that’s what I really love about her. It’s so important in this day and age to have young, strong female role models and leads. She takes control, and she doesn’t really rely on anyone else. Also she goes through quite a journey so that was really interesting to play because you go through three or four versions of the same character throughout the show. I like that she adapts and changes and I like that she fights as well.

What was your standout scene from the shoot?
One of my absolute favourite things about it was the relationships in it - in particular, a relationship that grows between Mia and one of the other girls. It’s written so well and was so beautiful to play and myself and the other actors got on so well, it just made that really good to explore. That key relationship in the show ends up being more important than any other. It’s great to have a friendship at the centre of a drama with a ‘girl power’ message.

How does the role of Mia differ from other parts you’ve played?
We’re all very new to this - most of the cast are newcomers. I’d only done one job before The A List - I play Alia on BBC Doctors - and the character in that is very different to Mia. Alia is very naïve, quiet, and that’s not Mia at all. So it’s different to things I’ve done, but Mia is a dream role really.

What would you like audiences to take away from watching The A List?
Right from the moment I was cast, I was really happy for my younger self that someone mixed race was cast in a lead role for that age group. That was something I really missed when I was younger - being able to see lead characters that looked like myself, that aren’t stereotypes. Mia is just a normal, British girl like me, and she just happens to be mixed race. And Rosie who plays Alex is also mixed race so it’s amazing to have two of the lead female roles be mixed race and really rare for that age group. I hope our characters can be role models for younger mixed race girls who are missing that representation on TV.

What do you hope for the future of Mia and The A List?
Because we had only seen excerpts from the scripts when we were offered the role, we were kind of taking a risk. But I just had a feeling and really trusted my instincts and thought it was worth taking a risk on. I read all 13 episodes in one go in one night and I just thought it was so well written. I completely trust Dan and Nina (writers) that if there is a season two, they know Mia as well as I do and they will do her justice, definitely.