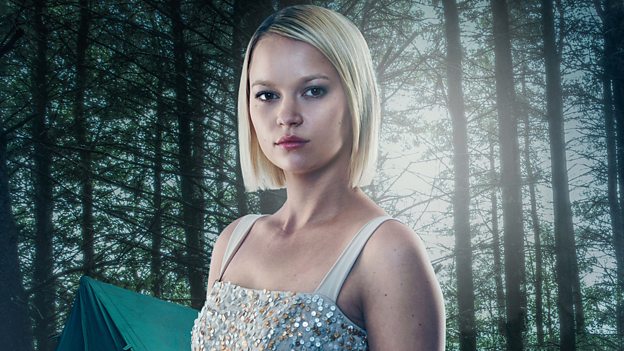 When I realised Amber was the baddie, I was excited because I hadn’t really played a character like that before - I usually play 'nice' characters.Ellie Duckles

What attracted you to the character of Amber?
She’s kind of the baddie I guess, but there’s a lot more to her than that. One of the things I really love - initially you read the character and you think “oh god she’s really intense, she’s a bit scary” and you don’t really understand why she does the things that she does. But it’s because she’s actually quite sad. She doesn’t know how to fulfill herself in her life and she’s quite lonely. As you see more and more episodes, you see she just genuinely wants to be accepted as a normal girl and that’s what I really like about her.

And also, playing a character with superpowers was really quite fun!

What was your standout scene from the shoot?
In the first episode, there’s a scene where Amber and Mia do a race across a rope bridge. I fall and ask for her help then Mia goes to help me and I let go - you see the start of this rivalry forming and you see how Amber uses that in her favour to get the boy, get the attention, and get what she wants.

How does the role of Amber differ from other parts you’ve played?
When I realised Amber was the baddie, I was excited because I hadn’t really played a character like that before - I usually play “nice” characters. So it was really fun to dig into a character that has so many twists and turns and motives.

What would you like audiences to take away from watching The A List?
One of the things I really love about the show is that the BBC has created a drama for young teenagers - there are so many dramas out there that are incredible but also slightly inappropriate for younger audiences. Sometimes they’re too scary or can be difficult to engage with.

I also love how diverse The A List cast and storylines are, especially the storyline between Petal and Alex, it’s great that young teenagers have that to relate to. Jack’s character Zac is a really sensitive character and I feel like a lot of young boys might need to see a sensitive guy on screen.

What do you hope for the future of Amber and The A List?
I’m really excited for all of us - most of us are starting out on a similar playing field, for a lot of us it’s our first, big job and we had such a great time filming it. We all really want it to do well and be something that we can all progress from in our careers. Hopefully if we get a second season, it will be really interesting to see where all the characters go!