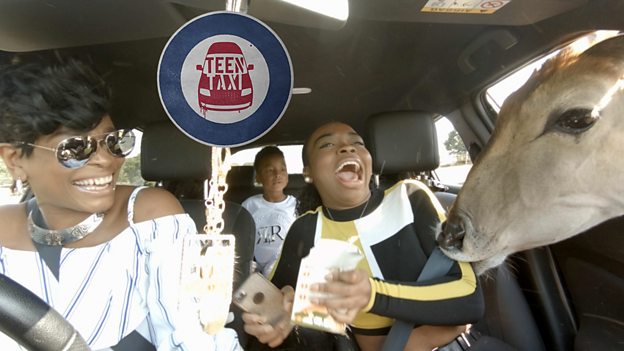 Category: BBC iPlayer; Factual; Commissioning
In a hectic world of multiple screens and social media, time spent in the car is the last refuge of unfiltered child-to-parent conversation - a place where laughs can be had and awkward subjects can be broached, without digital distractions or the possibility of escape.

This 12-part series sees teenagers from across the UK allowing cameras into their family cars to film these honest, daily chats they have with their responsible adults on life, love and everything they are going through.

Whilst the teens are transported to college, work, gigs, prom parties, festivals and even to modelling shoots, we see their ‘taxi drivers’ attempting to coach them in sport, reminiscing about their own childhoods, supporting them through panic attacks, offering them unsolicited advice or just trying to ‘get down’ with their offspring. It's all accepted with varying levels of gratitude. There are bad dad jokes, shared karaoke moments and shocking candour as well as discussions about boyfriends, girlfriends, moving out, bullying, tattoos and career choices plus life-changing moments such as collecting exam results.

In the first episode, 17-year-old Jack talks to his dad, Andy, about his decision to come out and later in the series the pair go together to collect the outfit for Jack’s debut drag performance. Maya, 14, talks with mum, Sharon, about losing her hair, while 16-year-old Lucas gets wound up by his mum, Gemma, about overdoing it in the gym.

In other episodes, Caitlin from Lincolnshire is keen to move out of the family home with her boyfriend, Billy, but her parents aren’t convinced she has the domestic skills to survive. Lenny considers following his dad’s footsteps by joining the army, Josh leaves for university - or he would do if only his distraught mum could find the campus - and mum Michelle takes 17-year-old Cai and friend Eli to their first ever Pride festival.

Made by Dragonfly TV for BBC.