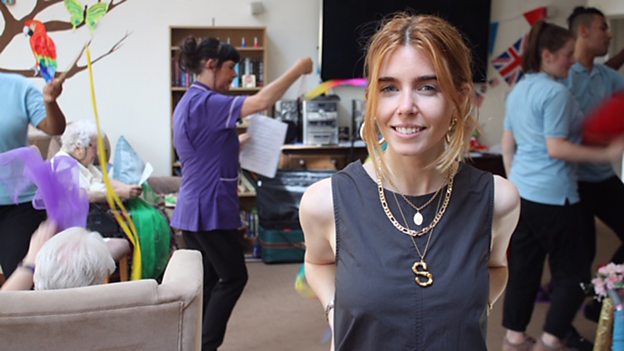 The Nine To Five with Stacey Dooley

The series follows them as they experience the exacting nature of work whilst learning to eke out their wages at apprenticeship level to pay for food and accommodation.

Elliott, from Kent, refers to himself as ‘Diva Elliott’ and would like to be his own boss or maybe have a career as a reality star. It’s a bit of a roller coaster journey for Elliott when he is sent home from the first work location and asked to leave the premises in another, but can he turn things around and impress bosses with his communication and people skills?

Eighteen-year-old, Abbey, from Newcastle, thrives in some of the work placements. She impresses employers with her charm, work ethic and application but finds it difficult to accept criticism. Throughout the series, Abbey demonstrates her resilience and team leadership skills, putting her own veganism to one side when making meals for meat-eaters in the group and when working with leather in the trainer factory.

Hakeem, 16, from Surrey shows great promise preparing food in a restaurant but his bosses are less impressed when his pride stops him cleaning toilets. Can he find his success in another location?

Sixteen year old Mersadi, from London, can lack confidence but she is very determined. Initially she finds it difficult dealing with members of the public but mostly delights bosses with her work, receiving glowing feedback. Even Mersadi loses her cool, however, when some members of the group fail to pull their weight, pointing out that, just like her, everyone needs to focus even if they don’t love the work they are doing.

Skye, 16, from Coventry, experiences extreme highs and extreme lows throughout the series. She struggles to engage with the public or focus on the job in hand, which is reflected in her pay, and she faces questions from the other members of the team who have been working hard to support her. However, a work placement in a care home shows a completely different side to Skye and there are emotional scenes as she gets rave reviews from the bosses there.

Over the course of the series the teens get a rude awakening as Stacey takes them on five different, tough work placements. They kick off their journey in a Gordon Ramsay London restaurant where head chef, Davide, and front of house manager, Roberto, agree to mentor them over two days giving them hands-on experience with real customers. For some it’s a complete shock to the system and for others it’s a chance to revel in learning some top-notch hospitality skills in this gourmet Italian restaurant. Stacey also takes them to work in a care home in Weston Super-Mare, one of the UK’s biggest call centres in Sunderland, the New Balance trainer factory, in Cumbria, and finally, Europe’s busiest airport, Heathrow.

Made by Twenty Twenty TV for BBC.