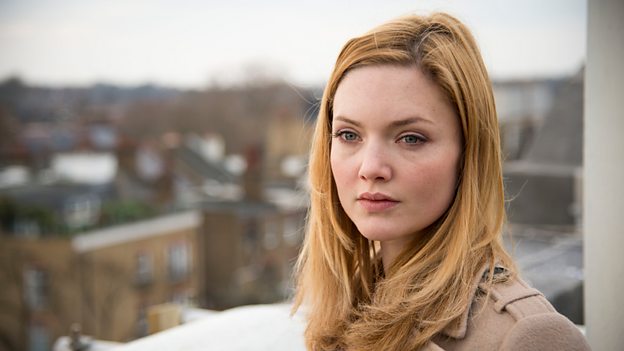 There are a lot of detectives who have a quirk. Cormoran Strike is far more subtle - there’s something quite grounded or almost humble about him. You know that he’s got a interesting history, but he’s emotionally complex as well. Holliday Grainger

Where does your character Robin fit into that?
Robin joins Cormoran Strike at the very beginning of The Cuckoo’s Calling as a temporary secretary. But she’s very practical and quite savvy and intelligent. We find out later that detective work is something she’s always been interested in, and she proves her worth as more than just a temporary secretary during the course of the series.

Did you read the books before you started work on the show?
Yes I did - I think it’s important to and J.K. Rowling writes so fantastically. I had a very clear idea of who Cormoran Strike was and also who Robin was, every woman I’ve spoken to who has read the books loves Robin and can see themselves in her. Once you've read them, that is your research and your preparation done. After reading the series, I feel like I would know exactly what Robin would do in a situation, or my interpretation of her anyway.

What do you think Robin’s characteristics are that so many can relate to?
Robin is practical and passionate and very grounded. But she’s also compassionate, empathetic and loyal. She feels like a very centred and grounded, strong woman, even though she doesn’t have a lot of life experience. She’s grown up in a small town and left university early. In a sense, because of what she’s been through during university, she feels emotionally wiser than her years and I think that feeds into why she’s good at her job; she’s interested in psychology and she has a natural aptitude for that because she’s naturally very compassionate.

Did you think that Charlotte was a foil for Robin, that you put them against each other and they’re poles apart?
There’s clearly something that attracts Cormoran to Robin immediately, which we know from the hints of that through the book and certainly in the show. We don’t know very much about Charlotte, apart from the tiny bits we glean through Strike’s thoughts in the book and flashbacks in the series. It feels like Robin is the antithesis of her in some respects in that Robin is very honest, very loyal. Charlotte isn’t. There’s something quite dark and complex and untrustworthy about Charlotte that you don’t quite understand her. I think that Robin is a lot more of an open book.

How much discussion did you and Tom have regarding bringing the two characters together? How did you work together?
When Tom and I started we didn’t really talk about it much, we didn’t sit down and talk about what the dynamic should be and when and where, it just felt very natural. I feel like I know Strike from reading the books as well as Robin.

We both agreed with each other’s playing and interpretation of the characters, so it feels like there was a manual that we’d both read before we even turned up on set.  It’s an interesting dynamic that Strike and Robin have, built on a mutual respect for each other. It’s obvious that there’s some sort of attraction to begin with, and as the mutual respect grows so does the attraction.

It’s almost like her relationship with Strike is the first adult friendship and relationship she’s had since moving down to London, since she’s started a new life. She’s becoming who she wants to be. Secretly, she’s always been interested in being a detective and investigating. Strike is almost allowing her to be who she always wanted to be. He kind of embodies a freedom and a sense of respect for herself.

Can you tell us what you think is going on in Robin’s relationship with Matthew?
Cormoran has a lot of life experience and it’s emotionally complex and quite deep and very understanding because of what he’s been through.

Robin and Matthew have been together since they were kids in college. They are probably each other’s only ever boyfriend and girlfriend and they’re still in this relationship. There’s almost a lot of life lessons that they’ve never learnt.

Is Matthew almost a reminder that she’s escaping from her previous life?
I don’t think Robin’s escaping from her past life. I just think she’s learning to deal with it. Her experiences have made her who she is and she’s perhaps a different person than she was when her and Matthew first got together and maybe she’s never quite been able to embody that and become that yet.

Certainly her job and her relationship with Cormoran allow her to experience new things and realise herself a little bit more. In a way, she’s growing apart from Matthew because she’s growing into something different; into someone that he doesn’t recognise.

It’s not necessarily that she’s changing, but she’s maturing and becoming stronger, becoming who I think she always saw herself being.

What do you think attracts her to being a detective and that kind of world?
Robin says herself that she's always been interested in forensics and psychology. She studied psychology at university with a view to studying forensic psychology, so she’s obviously tenacious with that wish. In the same way that we’re watching Prime Suspect when we were kids and thinking, "I want to do that someday".

I remember in college, so many people wanted to do criminal and forensic psychology because they were watching it on telly so much of the time. Robin recognises that she has the skills for it - she’s very practical and has that empathy and psychological understanding. It’s what she wants and what she knows she can be good at. She’s quite right actually.

What’s your view of Cormoran as a character? What makes him different from other classic detectives?
There are a lot of detectives who have a quirk - like they’re the tough guy or they’ve got that suave James Bond-y element to them. Some kind of little quirk.

Cormoran Strike is far more subtle. There’s something quite grounded or almost humble about him. You know that he’s got a complex very interesting history. He's emotionally complex as well. From who his father is and his background - living with his Mum, growing up and going to Oxford and then going to the Army.

He’s got so many different strands to him and they’re not all put forward on a plate. There’s an air of mystery about him. You know he’s got hidden depths. He’s quite humble and he cares. He’s almost quite gentle though he’s tough in a way. I think that’s what makes him so attractive.

Let’s talk about the practicalities of filming in London. You’ve filmed in some amazing locations.
It’s been about 10 years since I’ve shot on London streets, it’s such a novelty - walking through Soho, walking back down Dean Street. I keep forgetting I’m working sometimes. When we’re shooting at the Tube, I just think, oh I’ll get the Northern Line home then shall I?

London is such an integral part of the books, you can see it and feel it when you’re reading. Quite often Strike and Robin will take a journey and if you live in London you know where that journey is, you know what tube stop they’re going to get off at and what road links to what.

When we filmed the series, Robin will get off at Leicester Square and then she’d walk to Denmark Street. Then we’d be filming on Denmark Street, which is like the whole world of Cormoran Strike coming to life in London.

We had some scenes out and about in Soho and saw the poster and thought, "Oh that’s Lula Landry, what’s she doing on a poster?" And then thought, "Of course, we’ve obviously put it there!" In the way that you’re so used to seeing Cara Delevingne everywhere, it just felt so natural to see Lula Landry everywhere as well. It’s almost like the world of The Cuckoo’s Calling just came to life on London streets as we were filming.

You filmed in Lula Landry's apartment for a few days. Is it how you saw it in your mind?
Jo’s written about lot of real places in the book, like Robin's home village of Masham, where she was christened. We filmed at that church and it’s exactly how it’s described.

Can you tell us a little about Strike's office?
Denmark Street does have that kind of untouched quality, the kind of slightly shabby, scruffy guitar shop kind of feeling. Strike’s office feels quite 1970s in the greys and browns.

There are reminiscent bits of music about the place, there’s a piece of artwork on the wall that’s made out of old trumpets and there are guitars everywhere - and it’s still got the guitar holders on the walls. It’s still in that musical world of Denmark Street and you feel like you’re in that world when you enter.

Was there a scene you particularly looked forward to doing?
In The Cuckoo’s Calling Robin is seeing London with fresh eyes. A lot of the places that she goes, she’s seeing the posh hotels and the supermodels' apartments with novice, naïve eyes. In a sense, in all the locations that I went to, everything felt exciting.