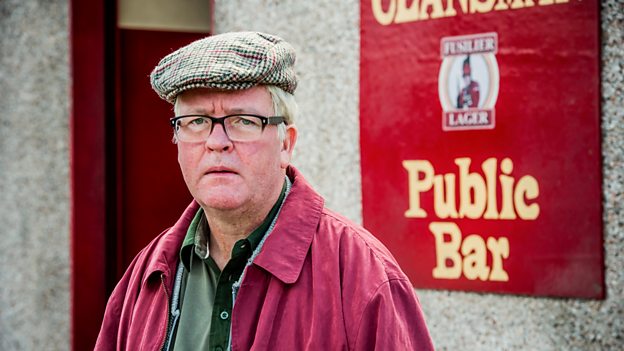 When you look back on the show we’ve had loads of different famous faces appear in Still Game including Robbie Coltrane and David Tennant. I think if you look at the roots of the show it’s all about what it’s like to be Scottish and, for me, that’s about having a laugh.Paul Riley

Category: BBC One; Comedy; Scotland; BBC Studios
Known for his attempts to make money to boost his pension, Winston’s Achilles heel is gambling and his arch nemesis is Stevie the Bookie who he hates with a passion.

A good friend of Jack and Victor’s, Winston had his leg amputated after his 80-a-day smoking habit caught up with him but he’s an unstoppable force, with a limp. Winston has a strong moral compass and often tends to be the first to reprimand Tam for being mean with money.

How would you describe Winston?

Everybody can see Winston takes no prisoners, no matter how old you are he says it like it is. Winston fits in very well within a group of people who think that way too.

It feels about two hundred years ago when I started to play the character of Winston in front audiences at the Edinburgh Festival. Back then we played to audiences of probably around 100 people which, when you bring it forward to the present day, is quite incredible how far Still Game has come.

What do you think makes Still Game unique?

I think it’s about community and about how people can relate to every single character in the show. The audience of the show goes from nine to 90 and they connect with every single person in Still Game - it’s either their dad, their uncle, their mum or the guy they go and buy their daily newspaper from.

The appeal of the show is it’s brilliantly written and acted! There are no concessions to any sort of caricaturing or anything like that. We just are who we are. There’s moments when each one of us is down but they just get up and rise above things.

What does this new series offer comedy fans?

We’re at the point where our audience don’t want it to change and the more it stays the same the less it changes as Spinal Tap would say. People don’t want Still Game to be anything other than it already is because they like the familiarity of our comedy.

And there are some new arrivals in Criaglang this time around…

Yes, Bruce Morton joins the series and he knocks it out of the park as the new undertaker. He’s just so funny and when he came on set I can’t tell you the number of times we had to stop because he was just making me laugh so much by just being himself.

And then there’s Craig Ferguson too. He’s totally fearless - he’s interviewed a million famous people in his career and he loved being part of this. He’s absolutely brilliant in Still Game.

When you look back on the show we’ve had loads of different famous faces appear in Still Game including Robbie Coltrane and David Tennant. I think if you look at the roots of the show it’s all about what it’s like to be Scottish and, for me, that’s about having a laugh.

Any stand out moments for you?

There’s a gazillion memorable moments for me in this new series - everybody’s brilliant and I genuinely think this is the best Still Game we’ve done. During filming, I was forever finding myself lost watching everyone else and laughing at what was happening, to the point I’d forget to feed my lines to the others!

How do you find growing old on-screen and pulling on Winston’s polyester slacks?

The thing about costumes for actors is they often want to buy them after filming but that never happens in Still Game! The polyester clothing we wear genuinely is man-made and you end up sweating like you wouldn’t believe especially under the hot studio lights. So after 12 hours you come home and jump into the bath because you’re, well, humming!

And if you could be in any other comedy series which one would you choose and why?

Probably Alan Partridge or The Office. The term ‘mockumentary’ is often used but I don’t think it’s that - I think it’s a really well-observed story about how people have to live and work in an environment where they don’t always like each other.

And then there’s Alan Partridge who, for me, is the best observed character of all time. I just love the fact he’s untouchable in his own head. Even when he’s got two bob to his name he’s like: "No I’m Alan Partridge!". He’s absolutely brilliant at what he does.

I think the same can be said about Still Game. We’re time-served when it comes to this show so I know that if I ever drop the ball, Jane will pick it up, Ford and all of them. We’ll get there. We’re a team.