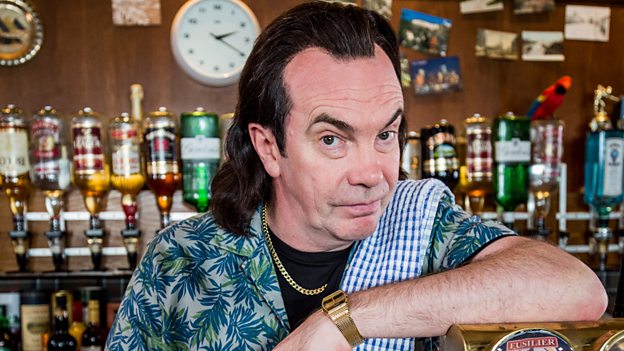 He’s a kind of cross between a WWE wrestler, one of Duran Duran and David Hasslehoff. He’s got it all going on. Now that I’m losing my hair, I quite enjoy Boabby’s mullet.Gavin Mitchell

Category: BBC One; Comedy; Scotland; BBC Studios
The barman at The Clansman pub, Boabby is often the object of Jack and Victor’s jokes but he gives as good as he gets… sometimes.

Customer service is not a strong point for this barman, he can be snide and rude to the pensioners who prop up his bar but he is fond of them. He always has a new nickname for Jack and Victor when they come into the Clansman but they usually shoot him down with their rather robust comeback. Although Boabby is sarcastic and gobby, he cares about the community and especially Isa, sticking up for her whenever anyone does her wrong.

You play Boabby the Barman, how would you describe him?

I think Boabby’s a bit put upon by Jack, Victor and the others. In his own mind he’s a bit of a catch but he’s really quite delusional and is always slapped into place by everybody else around about him.

But underneath it all, Boabby has a heart of gold. He has a gruff exterior but he’s not entirely black hearted. Far from it, he keeps an eye out for everybody and he has a soft spot for Isa. There’s always been quiet things he covers up with his gruffness but that hard exterior slips from time to time.

Boabby’s customer service skills could do with a little work though… does he like working at The Clansman?

I don’t think he’s got much choice! He’s been behind the bar of The Clansman since he was 18, I don’t think Boabby could do anything else.

He has dreams, allusions to things and in this new series the audience will see him attempt to make some changes but, as usual, gloriously fails. I don’t know if he would know what else to do. I think he would be lost without the Clansman and Craiglang - he’s a big fish in a wee pond so if Boabby left to manage a fancy hotel bar he couldn’t cope. The Clansman is his own kingdom and he can kind of rule that. As much as he might moan and groan about aspects of his job, he loves it.

What do you think makes Still Game unique?

It’s impossible to answer. People chose the show rather than us targeting an audience. Still Game has a unique appeal which spans generations from kids to grandparents and everyone in between. We’ve discovered that the show’s appeal now spans across the world from Brazil to Malaysia and it’s quite staggering really. They totally get it. The show has classic characters which appear in every society - the local gossip, the miserable sod, the barman. It’s a bit like the Scottish Simpsons. So that makes me Mo the barman I guess! I’ll take that.

What’s on offer in this new series?

Old and new fans will love it as this series has some brilliant storylines, fantastic comedy set-pieces and some new characters. There’s a funeral director which changes quite a few things in Craiglang… forever. The shadow of death looms large - who will die, maybe one, maybe more, could it be Boabby?

We also have a fantastic guest star in Craig Ferguson and I think generally this series has gone up a notch and even has stunts in it!

Any stand out moments for you?

The tables get turned on Boabby a bit this time around as he needs a bit of help and support and discovers the community are there for him. It gives him a wee taste of mortality. And, aside from that, it was great fun to have a lot of scenes with Craig Ferguson who was amazing.

He’s a kind of cross between a WWE wrestler, one of Duran Duran and David Hasslehoff. He’s got it all going on. Now that I’m losing my hair, I quite enjoy Boabby’s mullet.

Which other comedy series do you admire?

I’ve got loads of comedy heroes. Recently I binge watched all the series of Black Books. I love Dylan Moran in that - he’s a wee bit like Boabby in many ways.