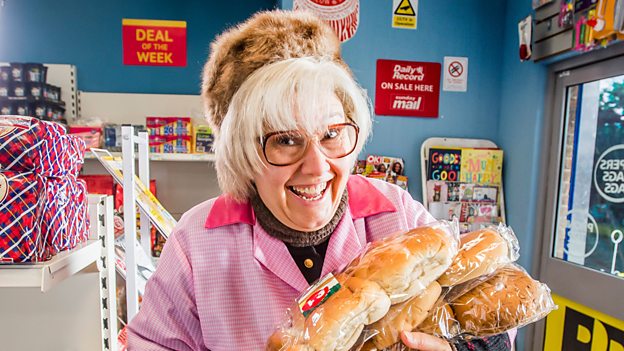 What amazes all of us is how many children love it. Teenagers can quote it word for word but it also appeals to an age group right up to the pensioners it depicts so they’re not offended by it.Jane McCarry

Category: BBC One; Comedy; Scotland; BBC Studios
The local gossip, Isa loves being in the know with any juicy gossip or news.

Isa has the inside track on everyone and working in Navid’s shop as a cleaner gives her the chance to clean up on Craiglang’s gossip. As much as the men sometimes roll their eyes when they see her coming, there’s a real love and friendship towards Isa and she’s regarded fondly in the local community. Isa might have a big mouth but she’s got an even bigger heart.

Tell us a little bit about Isa…

I love Isa. I think probably she’s not always had it easy so if she didn’t have other people’s lives to talk about and gossip and stories to tell, she wouldn’t have a great deal else in her life. She’s not a malicious gossip, she just can’t help herself. It’s like an illness with her! She wouldn’t deliberately start a nasty gossip. If she knows something it sort of bursts out of her.

Isa’s the local gossip. Do you think it’s a title she wears with pride?

She’s always raging if someone knows something that she doesn’t already know. She’s very skilled at getting information out the others and they’re all quite amazed at how she does it.

What is it about Still Game that makes it such a comedy favourite?

It has heart and a truth. What amazes all of us is how many children love it. Teenagers can quote it word for word but it also appeals to an age group right up to the pensioners it depicts so they’re not offended by it.

It doesn’t really fit into a certain type of person who watches it - male, female, young, old, different walks of life. I think it comes down to the fact we all recognise these characters. I’ve grown up with all these people, I’ve been immersed in the world of Still Game all my life even before I starred in it!

What can fans expect from the new series?

A lot of the writing nods to classic Still Game but there’s also a real maturity in the writing too. When I first started working on Still Game I was 31. Now I’ve had a family, my dad’s passed away, my mum’s elderly and I know people in care homes so I understand what the characters are going through.

You’ve got a guest appearance from Craig Ferguson in this series - how will Isa feel about seeing her old friend again?

Never mind Isa! What about me? I was turning up to work with full make-up on which is a first for me! It was wonderful but in all seriousness he was amazing to work with. He wasn’t at all starry, he just fitted it. You’d never know he’s this huge American star, you actually forgot that within five minutes of meeting him. His stories were out of this world. That episode is one of my all-time favourites.

How do you find being transformed into Isa?

I remember I used to have to scrunch up my face to make wrinkles but sadly not so much now! As a woman in her late forties it’s brutal I can’t even see the hairs growing out of my chin because I’m not wearing my glasses, my eyesight’s failing and then there’s the grey hair. It used to be a big jump transforming into Isa but not so much these days - I can see what’s coming in the post!

In terms of costume, I always have on about five layers of clothing of the thickest, cheapest wool. There is no animal in the world that produces that kind of wool which makes Isa’s jumpers - they’re nuclear.

If you could be in any other comedy series which one would you choose?

Inside No.9 - it’s the characters and the odd things that happens which makes it so wonderful. I want a part in that show! I know Greg’s a huge fan too but never mind him… write me a part please.