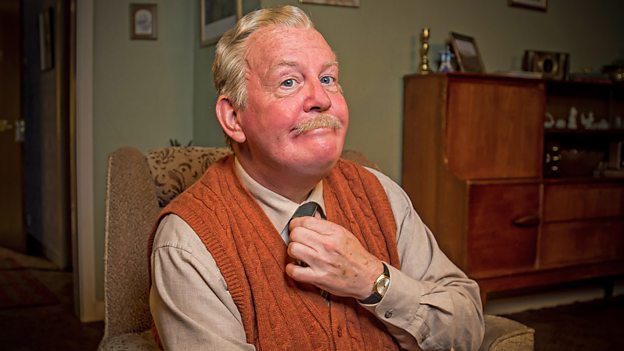 It’s the comfy cardigan routine, as soon as you pull it on, you’re there. I do look forward to it - an instant bit of ageing.Ford Kiernan

Category: BBC One; Comedy; Scotland; BBC Studios
As well as living on the same landing as best friend Victor and local gossip Isa, Jack is nothing if he’s not part of the Craiglang community.

He celebrates the fact they exist together as a unit - if one of them is not quite right, they rush to help out. Jack spends most of his time with Victor, often visiting their local pub, The Clansman, and is happy to be led by Victor when it comes to decision making. He’s also known to speak up when he’s unhappy with something… or someone.

Last series was a huge hit across the UK and, in Scotland, became the most watched non-sporting programme in over a decade… how does that feel?

It’s reassuring to know that people are still engaging with it after all this time. It’s great hearing about kids picking up on it from their parents, people who hadn’t heard of it first time around which is a great vibe. Even as kids, Greg and I were watching things like Steptoe and Son years after it had first been aired. So it’s testament that a good fan base is forever giving and they’ve been just great to us.

We’re back in Craiglang to catch up with some old friends - what does this series offer fans?

We’ve got such a brilliant cast full of ‘go to’ characters we write comedy for now. Not to be flippant but it makes it easier at times to come up with a story and be able to say “right who are we going to give this to?”. If you were in a sitcom where there were only three characters it would be tough but we’re a bit like The Simpsons now, there are so many characters, the writing is that bit easier.

And, we’ve got a death coming… the bookies went crazy taking bets on who will die.

Well first of all I was surprised because the only other thing the bookies take bets on are reality singing TV shows and sport. It could be anybody. I mean Greg and I were both even money at one point and I was tempted to go and have a bet myself but I’d need to go in with a mask on. It’s another quirk for us, it’s never happened before.

Last time, Methadone Mick became a huge hit with the audience. What do you think it is about him they love so much?

Methadone Mick is a character who is just out to the left hand side of the community. I think the reason Methadone Mick has taken on so well is Scott Reid is a stunning performer and we’ve written Mick as an optimistic character and that makes him likeable. He’s vastly intelligent so the audience are left asking ‘why is he in this mess?’. He’s eternally in that mess but our audience have him in their hearts and they care about him as much as Jack and Victor and the rest of the community do.

Any new characters joining the series?

Bruce Morton is arguably the best stand-up comedian in Scotland. He’s got timing, dead-pan and all the skills we need for the character we cast him to play - the new undertaker, I D Sheathing. We’ve waited for years to place him and we’ve finally got it.

Bruce has a history with Still Game in many ways. He introduced Greg and I to each other, he was also my best man at my wedding and has starred in the live shows.

Bruce got me into comedy many years ago. We worked in an office together and Bruce had already started doing stand up and he said to me ‘you should give it a go’ and basically shoved me up on the stage. I did five minutes and within a wee while I was an established comedian. I've got a lot of things to thank Bruce for, we both have.

How would you describe Sheathing the Undertaker?

Well he looks a little bit like Tom Petty. He dresses like the hooded claw. He almost hovers when he walks and he has a sinister touch about him, a blank deadness in his eyes. As far as the character was concerned, Bruce embodied Sheathing immediately - which is a strange word to use when you’re describing a funeral director.

You’ve got a guest appearance from Craig Ferguson in this series - how did that come about?

What a coup! We discovered only by accident that Craig liked Still Game. Greg and I went out to America to write and we got in touch with him and he invited us around for a cup of tea. We got talking and he said how much he loved the programme so we asked if he’d be up for being in it. He didn’t even ask what the character would be or to see a script or what his position would be in the episode. So we came back and we wrote this character for him and we're delighted that he loved it. When he came on set to film with us it was just like pulling on a pair of old socks, he fitted straight in instantly. We’ve been very lucky - it’s a major deal to get someone with Craig’s profile and experience in the show but I probably shouldn't say that in case he gets a big head!

Do you look forward to pulling on your woollen tank tops and growing old?

It’s the comfy cardigan routine, as soon as you pull it on, you’re there. I do look forward to it - an instant bit of ageing. Don’t get me wrong, by the end of filming I could happily set fire to the costume but at the start I’m always like “yas! I’m back!”

Do you have a favourite episode from this new series?

I love the one we've called South Africa. In it, Jack and Victor get the chance to get away for the weekend. They get wind of the fact Navid has a caravan and do their best to get the keys to it. I like contained episodes where characters are stuck in the one room and a good proportion of that episode, Jack and Victor are stuck in that caravan. In the original play of Still Game we were stuck in the house because the lifts were broken so I do like these enclosed episodes.

If you could be any other character in the show who would you choose and why?

I’ve always kind of fancied being Isa. It’s the gossip factor, the technique of passing gossip on in that surreptitious way that I find fascinating.

And if you could be in any other comedy series which one would you choose and why?

Count Arthur Strong - it was a great programme. It was just brilliant. I’m also a big fan of Not Going Out so I’m chuffed to bits we’re going to be following them this year.