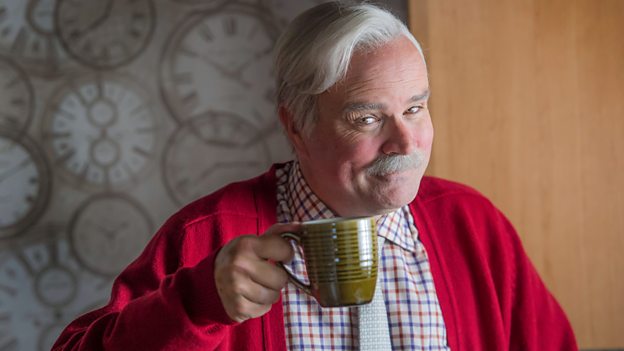 These characters have been with Ford and I for over 20 years. They’ve changed and mutated over time. They look different. It’s like watching an early episode of The Simpsons where they’re not drawn quite the same.Greg Hemphill

Category: BBC One; Comedy; Scotland; BBC Studios
Having been friends for over 60 years, Jack and Victor are like family. They’re more than friends, they’re like brothers.

They have some obvious similarities but are also very different - Jack can be quite wide-eyed and child-like whereas Victor can be quite cynical. He can also be crabbit and blunt. Nevertheless, he cares about his group of friends and is never happier than when they’re having a laugh together (sometimes at Boabby’s expense) in The Clansman over a pint.

Congratulations on the success of the last series. You must be delighted?

It feels fantastic and exciting and the fact that it didn’t happen overnight means it’s very special. These characters have been with Ford and I for over 20 years. They’ve changed and mutated over time. They look different. It’s like watching an early episode of The Simpsons where they’re not drawn quite the same. It’s exciting after all this time to find new viewers to come along and love Still Game.

A new series beckons… what can fans expect?

Expect the unexpected. It’s always nice to retain an element of surprise and keep the audience guessing but keeping the bits of the show that the fans love. As the show goes on we do take care not to take it off in a direction which wouldn’t work for the characters. The thing is the audience know the characters as well as we do now so we have to really make sure that the episodes are fun, believable and surprising.

And death is coming to Craiglang this year…

Yeah the bookies went crazy. It was fun and exciting and I was very tempted to call up my distant cousin and put some money on but I fought the urge! I didn’t want to end up like Joey Barton and get kicked out of the BBC for betting on my own show. I hope the speculation sees someone win a couple of pound on it!

Methadone Mick was a huge success with the audience - what is it about him that makes him so popular?

Scott Reid was an amazing addition to the cast - he’s a wonderful performer. He was a star when we first met him and now he’s an even bigger star. He’s gone on to appear in a national tour of the Curious Incident of the Dog in the Night-Time and other major TV shows including Line Of Duty. Mick’s a very typical Still Game character - never judge a book by its cover. On one hand he looks like a very sorry soul but on the other he’s the smartest guy in the room.

Yes, we’ve lots of new characters to look forward to seeing this series. We have Bruce Morton who’s coming to play Craiglang’s new undertaker, I D Sheathing which is really exciting. And we have a wonderful character played by Craig Ferguson as a returning love interest of Isa’s called Callum who has been living in Los Angeles for years. He comes back to Craiglang to see if there’s still a spark there.

How did Craig Ferguson get involved in Still Game?

We were thrilled he’s on board, his achievements are quite incredible so it was lovely to have him involved in Still Game. He’s a fan and has watched all the episodes and we contacted him and asked him if he wanted to be in Still Game and he said “yep sight unseen, sign me up!”.

Do you look forward to growing old on screen?

Absolutely, I like Victor’s soft shoes - they’re very comfortable. It used to be that I’d pull on Victor’s nylon trousers and it’d feel weird but nowadays I often think “I could stay in these a little bit longer”.

Do you have a favourite episode from this new series?

Probably Grim Up North which is the second one because it’s quite shocking and poignant. There’s even a parody of Jaws in one of the scenes involving the puggy machine [slot machine in pubs].

If you could be any other character in Still Game who would you choose?

I would probably be Navid so I could eat myself bandy on rolls and sausage and as many flumps as I could muster.

And if you could star in any other comedy series…

Inside No.9 - I’m just obsessed with it at the minute. It’s got such amazing writing and the performances are nuanced and incredible. In a landscape where everything is about returning characters, to create a new set of characters every week is such a challenge and those guys are so skilled. It’s a brilliant show and you don’t know what you’re going to get week to week - you might get something terrifying or really sad or even a Shakespeare parody. It’s amazing.