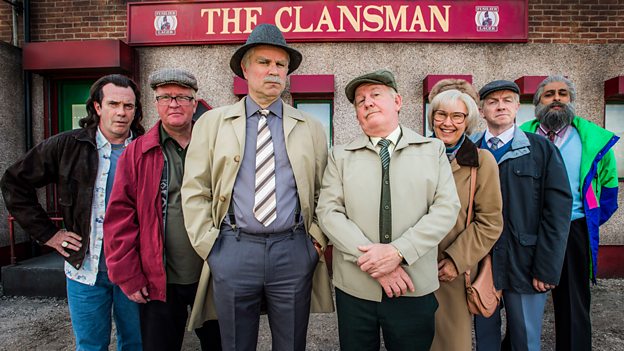 Category: BBC One; Comedy; Scotland; BBC Studios
Iconic comedy series Still Game returns for another hilarious six-part series following the adventures of lifelong friends Jack Jarvis and Victor McDade as they cope with everything modern life throws at them.

Created, written by and starring Ford Kiernan and Greg Hemphill, each week Still Game visits the fictional Glasgow suburb of Craiglang where Jack, Victor and the rest of the gang show comedy fans exactly how to grow old disgracefully.

The last series of Still Game - which aired in 2016 - saw the comedy series build its ever growing fan base across the UK and became the most-watched, non-sporting programme in Scotland in over a decade and also scooped the Scottish Comedy Award and Celtic Media Award.

It also features the arrival of a new face in Craiglang, creepy undertaker Iain Duncan Sheathing. The living embodiment of the Grim Reaper, Sheathing is played by comedian Bruce Morton and makes his spine-chilling and unmissable debut in the second episode of this new series.

A touch of Hollywood glamour comes to Craiglang as American talk show sensation, Craig Ferguson takes on the role of Callum - an old friend of Isa’s who returns to Scotland after a life in LA.

Still Game is a BBC Studios production for BBC One through BBC Scotland.