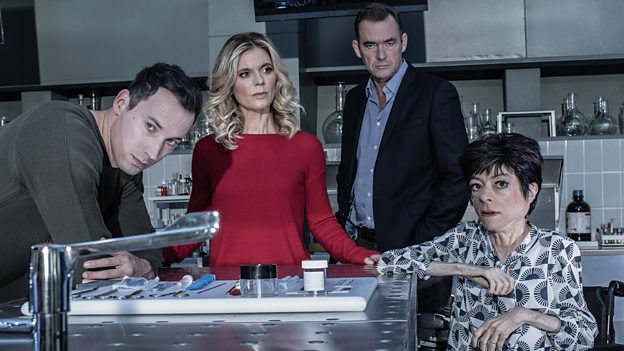 Category: BBC One; Drama; BBC Studios
The longest-running British crime drama currently airing on TV returns to BBC One with a dynamic new series of five contemporary stories, each told across two episodes.

The first two episodes will air on Tuesday 8 and Wednesday 9 January at 9pm on BBC One.

Silent Witness is a BBC Studios production. It is executive produced by Richard Stokes and produced by Kiaran Murray-Smith. Ben Irving is the Executive Producer for BBC. Emilia Fox, Richard Lintern, David Caves and Liz Carr return as the dynamic Lyell quartet.

Two Spirits
Episodes one and two

When a trans man is murdered and a trans activist is kidnapped, the cases are deemed to be linked. But when the DCI releases a suspect prematurely and incriminating evidence comes to light, he tries to blame the Lyell for the oversight. Thomas (Richard Lintern) bears the brunt of the pressure as he volunteers to take the fall - and focuses the team on the search for the perpetrator.

Lift Up Your Hearts
Episodes three and four

After a teenage boy dies in a meth lab explosion, his inspirational head-teacher, Noah Taylor (Colin Salmon), resolves to confront the drug dealers preying on his community. Dangerous batches of new drugs are hitting the streets and its down to Nikki (Emilia Fox), Jack (David Caves), Clarissa (Liz Carr) and Thomas (Richard Lintern) to deal with the consequent rise in overdoses. When tragedy strikes at the heart of the Taylor family, it puts Noah on a collision course with the criminals behind the drugs.

A collection of dismembered body parts, covered in intricate Japanese tattoos, have been found in a Brighton waste dump. The team are called in to painstakingly piece them together and they search for clues to lead them to the killer. Outside of the lab, Nikki (Emilia Fox) has some news she desperately wants to share with Matt (Michael Landes).

A car-bomb attack in a quiet suburban street brings back unwelcome memories for Jack, when evidence points to the involvement of a Northern Irish terror group, long thought inactive. As the family of the victim seek their own form of justice, Jack calls an old friend to help them find those responsible and stop the act of revenge from escalating.

The Ties That Bind
Episodes nine and ten

Nikki is humiliated in court when a brutal cross-examination suggests she made a grievous error. As she looks back at past cases and battles with self-doubt, Nikki struggles to trust her own instincts when she disagrees with Thomas over a cause of death. When another case is marred by apparent contamination of evidence, the team start to question if the problem lies elsewhere.