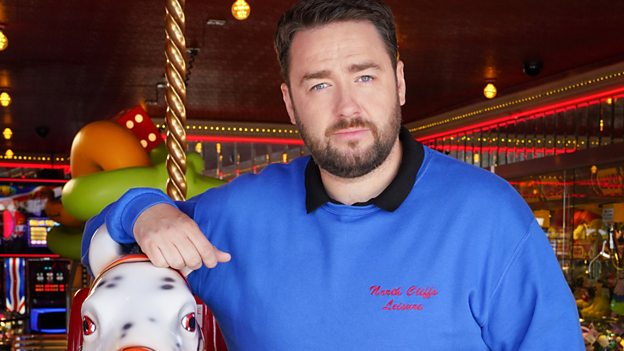 Each episode is a really lovely half an hour spent with a group of characters who I think the viewers will really like.Jason Manford

Category: BBC One; Comedy
Jason Manford tells us what we can expect from his character, Mike, in new comedy Scarborough.

Can you introduce us to your character and what role he plays in the series?

I play Mike who used to go out with Catherine Tyldesley’s character Karen years ago, but his constant gigging and being away did nowt for their relationship so they broke up. Now he’s knocked all that show-business on the head and is trying to make a go of it with Karen for a second time. He’s hitting 40 and needs to make some big decisions about his life.

It really was an absolutely joy. Catherine is so talented and a lot of fun to work with. Stephanie Cole is a legend and so funny, every scene she has she steals and so that was a huge honour to work with her. Playing my best mate is my actual best mate Steve Edge, who I think is one of the best character actors in the country. He just has funny bones and it’s a travesty that we’ve not seen more of him before. I can’t wait for everyone to see just how hilarious he is in this show.

Had you visited Scarborough before?

Yes, it was actually one of my first grown up holiday destinations that me and my girlfriend at the time saved up and paid for! It’s always had a special place in my heart.

Do you have any stand out moments from filming?

All the scenes I had with Bigsy (Steve Edge) were great because after a 20 year friendship this is actually the first time we got to act with each other. Location wise, we couldn’t have wished for better weather so Scarborough looks glorious! I reckon we’ll have done more for tourism there than their own tourist board!

Each episode is a really lovely half an hour spent with a group of characters who I think the viewers will really like. It’s funny and warm and feels like just the sort of TV show we need in these current times.