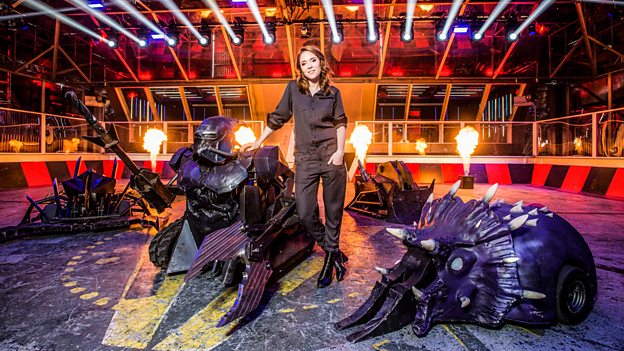 Winning Robot Wars means so much to these people. It's hard not to fall in love with that kind of passion and commitment.Angela Scanlon

Why do you think people love Robot Wars so much?

Passion. Time. Energy. The love that is poured into these inanimate objects will never not blow me away! The whole community is so close, they're part of each other’s weddings, they're best friends, married, and some people have even had to leave filming because babies are being born. Yes, it's a competition but the teams very kindly help each other in the pits, then they march to the arena and destroy each other’s robots and dreams. It's not just fan belts that are breaking this time around, hearts are left in pieces in that bullet-proof box.

What is new and different about this series of Robot Wars?

The format has changed to include the BIGGEST EVER BATTLE; the Ten Robot Rumble is absolute carnage! We've also introduced 'entanglement' to help keep the spinners in the competition under control! Ropes, chains, whatever they can get their hands on. This series myself and Dara are much more involved in the action, we're in the faces of competitors as they leave the arena, crying. We're in the trenches showing viewers the destruction up close. We're right in there, stuck in the action and hope that viewers will feel the energy that is so palpable in that warehouse!

From talking to the teams how much work and passion goes into making their robots?

The teams pour everything into their robots. Winning Robot Wars is the stuff of dreams for many of the competitors having watched the show as kids. One competitor has postponed university exams to focus on building machines, they invest lots of money in some cases and endless hours bringing these creations to life. They love them! Jobs are neglected. Partners are neglected. This is a fully fledged obsession and in many cases a family affair. Winning Robot Wars means so much to these people. It's hard not to fall in love with that kind of passion and commitment. It's infectious and it never fails to make me smile. I feel really proud of all the teams and love them all. Robot Wars is the most special show to be part of, I'm very lucky!

What was the atmosphere like during filming this series?

Crazy! FUN!!! Lots of kids wildly wielding foam fingers, but the pressure has kicked up a notch and I think teams are now hungry for the win. They still help each other out but tactically they're designing to destroy or stop particular dominant machines. They are throwing everything at it. Since the show is shot in Glasgow, Dara and I tend to shovel teacakes in our mouths at an alarming rate. I haven't looked at a teacake since we wrapped.

Who is your favourite house robot?

Usually I say Matilda but... this series Sir Killalot is an absolute beast.