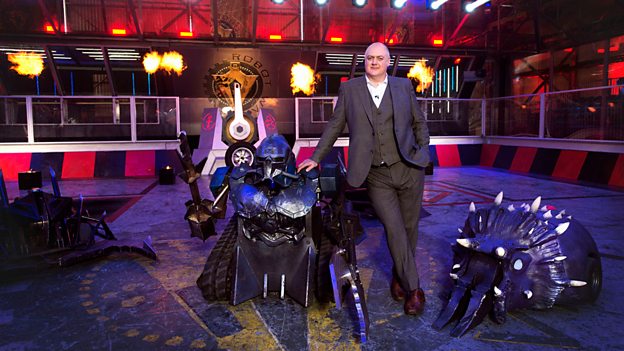 I think people take fiendish glee in seeing months of work being destroyed in a matter of seconds.Dara Ó Briain

Why do you think people love Robot Wars so much?

I think people take fiendish glee in seeing months of work being destroyed in a matter of seconds. Why the roboteers love it so much is more difficult to explain, but they do! They gamble their beloved robots, who can be literally be spliced apart from someone else’s beloved robot in seconds. Then they pick up the pieces at the end of the fight, then screw, nail and send out their robot back out again. It is like if you had a Lego building show, which ended every show with the models smashing into each other and the builders shouting "YES, let’s build it again!" There is no real equivalent to the amazing kinetic smashing of Robot Wars.

What goes into making a good robot?

There is an immense amount of person hours involved in the build and the design, with the team having a plethora of different skills and techniques that all go into building their incredible machines. What is amazing is it is people in sheds making these things, not big corporate companies. It can be one person with their dad, mother, or friends just in the back of the garden building a robot.

What is new and different about this series of Robot Wars?

We have loosened it up enormously; we now do the chats with the teams in the arena as they are picking their robots up and follow them as they do repairs, so it is a much more fluid show. The format has also been tweaked, so robots now all get a second chance if they fail to make it out of their group battle in Robot Redemption. It allows the cool and quirky robots normally marmalised or destroyed in the first fight, but are great fun to watch, the chance to fight at least one more time. It also means the diversity of robots has increased and allows school and college teams to feature longer, so more of a younger generation is involved. The ten robot fight itself is insane and one of the most ludicrous things I have been involved in! The runners up from each episode along with the winners of the new third place play-off battle it out in the longest fight in the history of the show and at the end of it there is only one robot left standing, with the other nine robots ending up in the pit whirling and clanking, grinding up against each other. The robots this series also seem to have got sturdier and stronger, to the point they are even smashing up the arena semi-regularly. There are robots that die in hugely dramatic ways, flames shooting out of them, flying into the arena wall, or tearing themselves apart.

Who were your stand-out teams or characters from this series?

We had our first satirical robot this series, Donald Thump, which has his hair and is very funny. Actually there are a lot of new teams coming in who create a few surprises but also returning ones. The returning robots essentially feels a bit like the Premier League, with teams such as Aftershock, Eruption, Carbide or Apollo. There is one battle that stands out in particular, in which all the roboteers came out to spontaneously applaud the losing robot down the tunnel because he put up such an incredible fight. They all gathered to applaud him all the way down, and it was nice. They are a lovely community, they all know each other, and they really look out for each other, so it’s really sweet.

From talking to the teams how much work and passion goes into making their robots?

Years and years of their lives are spent devising their robots. They have to go up the weight rankings; starting with tiny little micro versions of the robots you see, that all flip or spin and they fight in little arenas. Then they just get heavier and heavier and heavier until you get to the proper heavyweight ones. These teams spend their lives surrounded by robots; devising them and honing their design. Team Thor and Terrorhurtz have a good twenty years’ experience of fighting in Robot Wars, so it really is their passion. It is not just a singing competition with someone who goes ‘oh my Granny always liked my voice’, they have built an actual robot! It is cool and they genuinely know what they’re talking about, but it can all end really quickly!