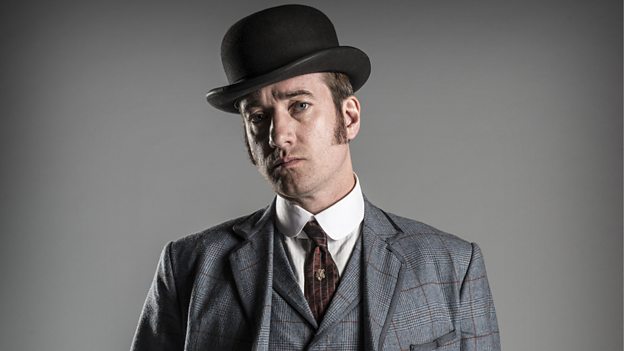 Where do we pick up with Reid in season two?

When we pick up with Reid he’s no longer with his wife, who has left home, and the audience discovers why during the first episode. They had a very traumatic end to the first series and he’d given her false hope that he’d found their missing daughter. It turned out it wasn’t her and so that was pretty hard for them both and their marriage dissolved. Anyway, he’s on his own and his house is a mess. He sleeps at the office in Leman Street most nights and he’s in quite a lonely and dark place but as always he throws himself into his work and that’s his constant salvation.

What kind of show is Ripper Street?

It’s just wonderful. I think it works really well because it’s a procedural but the characters are so beautifully written that there’s an awful lot of interplay between us all.  This is interesting and great to explore as actors and as an audience. So often you have a story of the week but there’s also a character arc which goes through the whole eight episodes.

What can we expect to see in season two?

There’s a bunch of great stuff. Joseph Merrick (The Elephant Man) makes an appearance. We witness the beginnings of Chinatown in the East End and the Triads make an appearance. You’ve got eugenics, which was a very strange branch of science which was popular for a while. There’s Fenian terrorism too - there were a lot of bombings. Thre is an episode that deals with that – there’s lots of gripping stuff.

How have the characters progressed in season two?

It’s lovely for actors because there’s so much there to play with, but I think that there’s always lots to mine for all the characters and I think that they get closer with each other. Sergeant Drake, for example, is played by Jerome and he has found happiness in his life with Bella. It’s interesting because there’s a reverse side of the coin. Reid has nobody and Drake’s got someone and so that’s an interesting dynamic. Jackson has found domestic happiness with Long Susan over in Tenter Street. Yeah, it’s interesting.  The three of us is such an interesting dynamic because it’s always ‘two and one’ so that’s always changing and always changeable.

What was your favourite scene from the first season?

There was lots of stuff. I like some of the funny scenes with me and Adam and Jerome, I liked those very much. Some of the lab scenes are very satisfying to do because they are interesting and they’re quite complicated. Quite simply my favourite is when we’re playing off each other and when there’s a bit of animosity and wit.

What was your impression upon reading the scripts for season two?

On the subject of the elephant man?

I was delighted to hear that Joseph Merrick was in it. I was intrigued first of all by the idea of the Elephant Man featuring in Ripper Street and then thrilled by the prospect of it.  It works very well because he was there at the London Hospital under the care of Frederick Treves, the great surgeon. When Merrick wanted to go on excursions, the men from H Division would be his bodyguards and look after him so it’s perfectly conceivable that Reid would have known him.

Has Reid and Drake’s relationship changed in season two?

It’s an interesting dynamic, it’s changed. I think Drake has found peace and domestic bliss.  He’s happy with Bella, at first he is anyway...

How does Reid cope with the pressures of his life?

I think he just copes, it’s his job. He’s under great pressure but that’s his job.  It’s dramatically very interesting because Whitechapel was small. The area they are policing is a small square mile with 70,000 people crammed into it, so there’s dire poverty and all the rest of it.  It’s a big job...

Even in the darker scenes there’s always moments of levity and wit. That’s just life, so you don’t think ‘oh here’s a comic scene or here’s a dark scene’ you just play what’s there. But to answer your question, comic scenes are great fun because you can have a bit of fun. One we just shot was like a big western, like a cowboy’s brawl, with Jackson sauntering in covered in blood stubbing his cigarette out in someone’s eye and mooching away. It’s a lovely way to see everyone again.

Reid and Shine’s relationship, I think is initially one of mutual respect.  Shine runs the Limehouse division and Reid runs the Whitechapel division. I think as far as Reid knows he is a good policeman. He’s effective and respected and feared a little and he’s also an extremely good and dangerous boxer. He won the Lafone Cup, which is the police boxing trophy for many years on the trot. That features later on in the series. Initially, they work together and then doubts start to grow about Shine and what kind of man he is.

How does Reid react to Shine’s methods of policing?

I think he realises that Shine has a more relaxed morality about the way he polices his quarter, which doesn’t sit very well with Reid.

What were the new sets like in season two?

The production designer is absolutely amazing so half the fun is just walking onto these new sets. And we had some lovely actors and great background artists. It was great.

Was Reid’s encounter with Crabbe cathartic for him?

I don’t think it was cathartic, I think it was part of a deal, a quid pro quo with Crabbe because Reid wanted information and Crabbe in a very cruel way wanted to know what happened to Reid’s wife and wanted revenge I suppose. He wanted Reid to open up and talk to him, which Reid does, so it was a great scene to play. It was lovely having Antoine Lesser back to do that. It turns out that Reid’s wife gets drunk and goes to the pub and collapses and screams in the street, publicly humiliating Reid in the interim between the two series.

How does Drake’s breakdown impact on Reid?

We haven’t shot that scene yet, but it’s beautifully written and it’s very interesting because Reid uses Drake as his ‘attack dog’ to beat confessions out of people. Drake realises he can’t do that anymore so it’s an interesting philosophical point. It’s something that Reid does engage with. He is a philosophical man and he does think about how he operates and that’s what makes him interesting.

Where do we pick up with Reid in season two?

At the beginning of this series, we find Reid in a pretty dark place. He’s lonely and he’s on his own - he’s sleeping in the office most nights, his house is a pit, his wife has left... We find out that she’s been committed to an asylum because of what went on at the end of series one. He’s in a bad way, but as always it’s the work that keeps him going, keeps him afloat.

Were you excited to work with the new cast members in season two?

It’s always thrilling to learn about the new casting and people who are coming in. It was great. We’ve got Joseph Mawle who comes in and plays Jedediah Shine and he’s a terrific actor. There are some lovely guests and it’s great when you’re here all the time and a new face comes in and sort of lifts everything. It’s really exciting, we’ve had some great actors come through.

What is the dynamic like with the main characters in season two?

It’s a lovely dynamic because it is two and one - three is always two and one, it’s a constantly shifting thing. Two are fighting and one is breaking up the fight. It’s great and they are lovely actors so it just gets better and better. The writing gets better and better and I think Richard enjoys it because we’re more relaxed, so he can take risks and do different things with characters. That’s what he’ s done, so it’s great that we’ve got time to explore different sides to our characters.