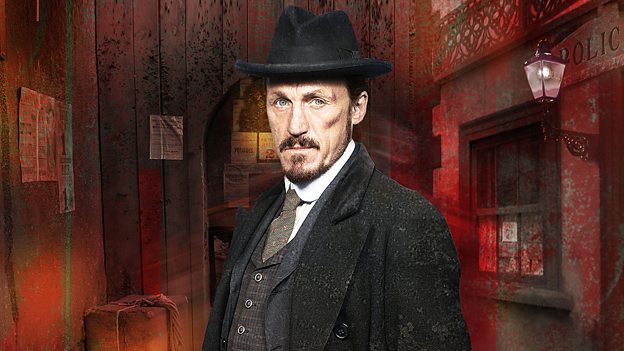 I play Sergeant Bennett Drake. I think he’s probably been in the H division, the police force, which is based in Whitechapel, East London, for maybe seven or eight years. And he had been in the army for quite a long time from his 20s, and served a lot and he’d been fighting in Sudan. And I’ve got a feeling that Inspector Reid had some kind of influence on his life before he actually joined the police force. It is Reid who persuades him to come along. He’s a very loyal man and especially so to Reid. It’s almost as if Inspector Reid has become Bennet Drake’s colonel in the army.

People have called him a bit of a pit bull but I think that’s unfair, myself. He’s more of a refined muscle head.

He’s been institutionalised quite early on. I think there was some kind of care home and then the army and then the police force so that’s his family. Essentially, he’s quite a lonely man, but I think he’s longing to have a life like his Inspector Reid. You know, to be happily married and have that couched around him because it’s something he’s never had. He’s got just a memory of it, you know, in his first few years. I’ve done my research, you know.

How would you describe Ripper Street?

It’s a police drama but it’s a very early Victorian London police drama and that makes it stand out. It’s got a swagger about it which is what made me want to do it. And the richness of life in Victorian East End London is very much its canvas and what makes it interesting to play. What it was like to be a policeman in those days is very, very different to now and you can feel that.

So it’s a very rich tapestry of London life in those times. That’s the backdrop. What makes it and pulls it apart for me from a modern police drama is you’ve got all these mirrors of today’s society - 100 and 120 years back in their infancy. All the same issues we have today but in that period which is very interesting.

What is the dynamic between the three main characters?

Drake would do anything for Inspector Reid. He’s like his Colonel and he’s an example of a successful, strong, upright moralistic man. So I think he idolises him quite a lot and is extremely loyal to him. And then Jackson comes into the picture, he’s obviously been around a while but I don’t think Bennett Drake is at all pleased about that or about how keen Reid is to get Jackson in and to ask his advice and use his expertise. I think Bennett takes it quite personally. I think there’s some jealously underneath. There’s a certain American swagger about Jackson that Bennet Drake, I think, would like to have but wouldn’t admit that to himself. Jackson’s off drinking and whoring and not trapped by the system. Bennett, on the other hand, is trapped by the system and thinks that’s a good thing and the best way to be. And yet he’s wound up by Jackson. I think he sees in him a man he’d like to be, a part of him that has been locked up.

What most excited you about the project?

What excited me was the richness of characters. That made it stand apart from other police dramas. And the richness of life at that time. It made it interesting. And fun as well and that swagger, like I say, that it has. It’s almost got a western feel to it. It’s not like everybody knows what they’re doing. There is a freedom of life at that time. There’s less control. Life is less controlled and that’s exciting. More and more as society has gone on, especially over here, everyone is more and more controlled and boxed up and you know what you’re doing and you know who the police are. And London at that time was very much out of control. The police hadn’t been there long. It was kind of almost a joke trying to bring law to those streets because it was a lawless place.

What do you think is the universal appeal of the series?

The element of having Jack The Ripper almost like he’s in the piece and yet he’s never there. The legend that he became in his own lifetime. The reverberations of this. The fact that he was never caught. Deep in our psyche that’s where it all started and that’s where we join Ripper Street. Jack has just killed the last of his known victims and yet the fact that he was never caught means there’s something incomplete in this bit of the London psyche. That is kind of haunting and informing the whole piece.

I did some boxing, which is the first time I’ve actually done boxing on screen I think. I remember when I was, I don’t know, 14, I went for my first boxing class and the guy who was teaching me came up and the first thing he did was whack me really hard on the nose. And that was it. I thought, sod you for doing that. And I stopped boxing and it’s not something that I’ve taken up since. But it was fun to be raging bull for a day even if I say so myself. But no, I’m not comparing myself to Jake La Motta, but it was just great to do the boxing thing. I guess it’s probably a bit of a fantasy for a few actors. Maybe not all actors but to actually get in the ring and box and to bare knuckle as well. I did early on in the boxing get my head stuck under a very heavy stunt man, and cricked my neck early on in the day which made it difficult. But I battled through so the boxing was fun.

Discuss your experiences of filming and working with other cast members

The actresses are really lovely in this show and I get some nice scenes with Charlene, who’s playing Rose. It’s great and I enjoy my scenes with her. It’s nice to have break from all the usual Bennett routine. Bennett doesn’t say a lot. He doesn’t feel a need to as Jackson and Reid tend to do most of the talking. But if they need somebody beaten up then Bennett Drake tends to do it. So it was nice to have something other than that place to go to. I mean he falls crazy in love with Rose, and it’s quite heartbreaking but it’s very nice to play.

Who do you think Jack The Ripper was?