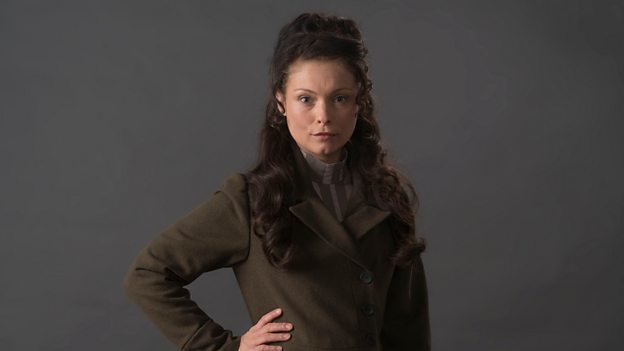 Category: BBC Two; Drama
Long Susan is used to being in hiding - she’s been keeping a decidedly low profile ever since she cheated death at the hands of Newgate’s hangman.

This time, though, the stakes have got even higher - she’s joined by her husband, Jackson, and her young son Conor. What’s more, there’s a brutal serial killer on the loose - Nathaniel, a man with whom she lived in close quarters until very recently.

Susan is a woman unafraid to make enemies in the pursuit of safety for her family, but the broken relationships she has left in her wake - with Rose, and with Reid whom she must know co-exist and try to make amends - are finally taking their toll on her. Not to mention the blood on her hands - Susan’s racked up a hefty death toll, and she will find it increasingly hard to outrun the guilt that casts its heavy shadow upon her conscious.

What's happened since the end of Season 4 with Long Susan, Reid and Jackson?

At the end of Season 4 we saw the three of them standing shocked over the dead body of Drake, and now we come back to Season 5 and we pick up pretty much from where we left them. They've been in the tunnels for a few days, trying to survive, trying to find solutions to their dilemma, what they do and they take a chance and emerge out of the tunnels and Jackson has a plan for where they may be able to hide out. And his plan is that they should hide out in an old abandoned theatre, which is currently being refurbished by no-one less than Miss Mimi Morton. So of course the three find themselves hiding out in her theatre; she finds herself confronted with three fugitives, and one of whom she was madly in love with when we last saw her in Ripper Street land. So obviously that creates a lot of tension, but out of the goodwill of her heart she takes them on board and they become like these caged animals in the sort of back rooms of this theatre.

What impact (if any) does the re-introduction of Mimi Morton have on Long Susan and Jackson?

Well I think the reintroduction of Mimi Morton just creates a wonderful sort of struggle, you know it's that sort of typical struggle where there's a couple and an ex turns up on the scene and what that does to everyone involved; the two partners and the ex. And of course Mimi's still very much in love with Jackson; Susan is aware of this; if she wasn't before she definitely senses it once they arrive at the theatre, and Jackson is very much a man caught in the middle, not quite knowing what to do with himself. But very soon I think the characters of Mimi and Long Susan, they have this real sort of simpatico. Once they're given a chance to get to know each other better, they realise that actually not being friends doesn't do either of them any service; being friends is really the way forward.

Does the pace of this series feel any different to previous series?

I know the writers and producers wanted Season Five to have a sort of slower feel to it. Having just shot it, I have to say that I don't, in the actual shooting of it I don't know if it feels slower to me; obviously there are a lot of scenes where they are waiting, hiding, plotting, planning and that might feel like there's not a lot of action to it when you watch it. However, filming it, it hasn't felt like that; it's felt incredibly intense and really full on; there's been this massive drive towards the end, definitely for me anyway in shooting it, so we will see when it comes out how it sort of plays.

Tell us about the dark times that Susan is currently going through with Conor and her desire to have a stable family life.

She's still separated from her son Conor, and that is her main concern, to get him back, to try and be able to escape with Jackson and create this family that she just longs for; that's all she wants, freedom with her two boys. And then of course when Conor is eventually with them, by this time I think something's happened in Susan… slowly, slowly there's been a drip feeding of painful memories of what she's done to end up where she is, even though I think a lot of the deaths for example that have occurred because of her, weren't directly caused by her. You know, they were indirectly fifty-five people died at her hands; her father who was an incredibly cruel and horrific man died very much directly at her hands and I think she's tried to justify all of these sort of losses but I think it's starting to catch up with her and I think seeing her son and being with him, makes her realise that that kind of a guilt is an incredibly hard guilt to live with and it's an incredibly hard guilt to pass on to your child and I think that's the dark tussle that's been going on inside her.

Tell us about the connection Long Susan formed with Nathaniel.

Initially when Susan was introduced to Nathaniel I think like most people she didn't understand the depths to Nathaniel, the gentleness of Nathaniel and he had the key to these vaults and underground tunnels and secret passageways under London and she wanted to learn his secrets. So absolutely she was approaching him in the hope of trying to get something that she wanted. And in that process I think yes she discovered the gentle soul that he was and when his cravings led to such horrific ends, I think she struggled because she knew there was more to him than just a serial killer.

Is it difficult for Long Susan and Reid to be in each other's company given their history?

Well Long Susan shot Reid, but I think that Reid understood why she had done it; she hadn't shot him to kill him, she had shot him to hurt him in order to protect the secret of her empire that he was about to expose, and he forgives her for it. I think the bigger harm that she did to him was lying about his daughter; and at the time that she lied about his daughter to him, she wasn't sure who Reid was. Here she had this young Mathilda under her care who was talking about an abusive man, who was dangerous and harmful, had hurt women, so for all Long Susan knew, Reid could have had paedophilic and violent tendencies towards his daughter and in that doubt she saw a way by which she could protect her own empire that she had built up that she was building up in order to do good for the community. Nevertheless that lie was a horrific one, to tell a father that his daughter had died, but not only that, that while she was alive she had been abused and violated. I mean that is the worst thing I think she could have done to Reid. But I do think Reid is confronting the demons within himself as well; he is battling with what rights he has to see himself as a good person when he has committed such horrific acts. And I think in him Long Susan sees herself reflected and his own battling of those demons reminds Susan constantly about the ones she needs to battle as well, and I think he forces her to confront them.

Are you going to miss playing Long Susan?

I'm going to miss playing Long Susan terribly; I love her, I think she's fantastic. I think Richard and Toby and all the other writers have really given her the most extraordinary journey, or given me the most extraordinary journey to play with her. She started out very much an incredibly tough human being who saw business opportunities around her and took them and often her business opportunities would involve her doing some kind of good alongside making money. But she's gone from being a brothel madam and having a tempestuous relationship with her husband, to in fact such a bizarre relationship that nobody even knew they were married, to their marriage being discovered, to her suddenly living openly with her husband together in marital bliss, to that falling apart, to her being forced herself into prostitution at the hands of a money-lender, to watching this money-lender die and swearing that she would take all his money and turn it into a huge empire, and becoming an entrepreneur with means that she hoped she would rebuild and better Whitechapel and the lives of the people that she saw living around her. And to seeing that crushed in front of her eyes, and going to prison, becoming pregnant, becoming a mother, suddenly having this other creature needing her and whom she wants to be needed by, and her life being switched around and her desires and her aims being completely changed by the birth of her son, becoming a fugitive, becoming a kidnapper of her own son, I mean the journey's been huge and amazing and I think it's very rare that you get to go on such an extreme journey with a character.