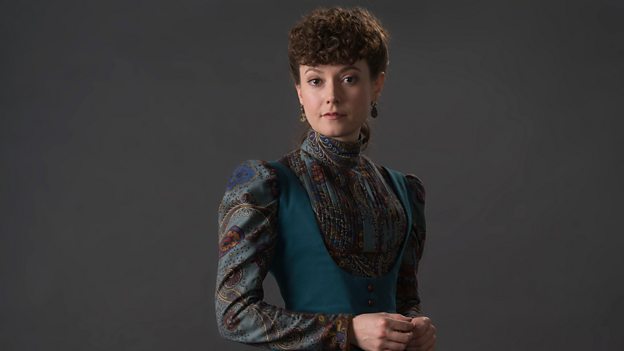 Category: BBC Two; Drama
The last time we met Hermione Morton, she was in a state familiar to many women: disappointment with Captain Homer Jackson.

After an intense affair, Jackson threw Mimi over to return to his wife, Long Susan. And Mimi has never truly acknowledged, perhaps even to herself, the damage that Jackson wrought.

However, she’s licked her wounds, and Mimi Morton is nothing if not resilient. Plus - though she doesn’t like it to be widely known - she’s actually got a good heart. So when Jackson approaches her for refuge - not just for him, but for Reid and also the woman for whom he left Mimi - Mimi acquiesces, taking it for granted that our heroes are fighting on the side of the angels, no matter what appearances may suggest. Mimi’s taking a big risk helping these fugitives, not just legally but also with her - only recently healed - heart.

How does it feel to return to Ripper Street?

It's so nice and rare to be able to return to something that you loved and two years later almost and I actually cried when Richard sent me the email.

What has Mimi been doing since we last saw her?

Real time has past both in her life and in my life, so it's been really fun to try and fill in the gaps and Richard sketched an idea that she's gone further into the Whitechapel world and taken up residence in a more committed way. Her wilder ways have gotten wilder, but she’s probably now thirty-one whereas before when we met her she was twenty-nine, so she's settled into herself more and she's settled into Whitechapel. She still lives out West, but she goes to Whitechapel a lot and her empire is building, so Blewitts is now up and running and she's then moved onto this huge project with the Alexandria Theatre that she wants to rehabilitate and make into the dolls house of her dreams.

Why does she re-emerge into our heroes' lives?

I was researching goddesses like Green Tarum who is a goddess of home and protection; it's Mimi. She's got a massive heart and she's doing it because she met those people and just thought these are really, really good people. She’s kind of addicted to them and to their lives and to their drama; so different from where she's from. So I think it was a no-brainer for her when they came in and as much as she acts kind of at the imposition, I think she'd like them to stay forever.

Do you think fate has drawn Mimi back to the three main characters?

That's a good way of putting it; I do think those forces are at work with these people.

Tell us a bit about the Alexandria set and how our heroes have all ended up there.

It's unusual in a screen job to be able to work in a theatre set, and it's really lovely. Our heroes arrive here because they need to go to the last place in the world that anyone would look for them I suppose, and the theatre is like a womb, a protective space, out of time and place; a magic box.

How do you think Mimi feels about having Jackson back in her life?

She's a woman of action and she can get things done and it's a beautiful vision, but then there's this sort of parallel track with her, which is this love, this sort of no-brainer love that she has for this amazing charismatic man.

How does Mimi respond to having Long Susan in her life?

There are some people that you meet and love and they bring out the best in you; and then there are some kinds of love where it's a jealous love. And I think that her love for Jackson is pretty pure and I think it just kind of opens her heart, but Jackson can only open her heart in one direction, whereas when she meets MyAnna's character, who is evolved as a person in a way that I hope Mimi could sort of one day evolve in that direction in terms of evolutions of the heart, like MyAnna's character is a devoted mother, is fierce…I think that's what made me cry when I read Richard's email about what's going to happen with Mimi in this series, he said that actually MyAnna and Mimi form a real connection and there's a recognition there. And I just, I've loved working with MyAnna so much and we hang out and it's been great.

What do you think persuades Mimi to help the most wanted outlaws in Whitechapel?

Well I think Mimi wants to help the most wanted outlaws in Whitechapel because it's bad ass and she's pretty bad ass and she's always looking for drama and excitement. Then there's also the real reason, which is that she gets it and she's on a level when she sees these people and for who they are and not for their reputation, and she's just open-heartedly kind and constructive; a good force in their lives.

Do you think Mimi is quite a receptive and sympathetic person?

She says 'I believe if we do not trust our instincts as to who is a good person then we might be lost'. And I think that's an amazing thing to say now and then and at any time because we could all be lost if we listen to gossip and read too much manipulative press or this or that. You know, you have to meet people on their level, on their terms and speak as you find, and she definitely does that, and lo and behold it does come good, which is very affirmative.

Is Mimi somebody who rarely regrets her decisions?

I don't think she even has that button; I don't think she looks back, no. Except she does get quite a growing up experience during this series and she says to MyAnna, you know when Jackson left me the first time for you I thought he was choosing his past instead of his future and she stops herself because she's learnt a heart truth rather than a head truth… of course he chose his past because that's actually his life, so it's his present too. And so I guess that's how she goes back on herself and learns a bit, because she's very articulate, so she can always fire off a response to anything. And then there's these moments I suppose where she's taken by surprise and by things.

Why does Nathaniel prove to be such a formidable foe for all our heroes?

Yeah; it's kind of like punching a cloud because his origin story makes him in a way the biggest victim of the whole thing and yet his crimes are so beastly that you know in a culture which likes to say good and bad, he's a very confusing villain.

What do you think draws Mimi to Reid?

We've just done the scene where she is on stage and suddenly just turns and looks over at Reid, and I was thinking I wish we could go and do it again because I suddenly thought that's the moment when Mimi realises that she could spend her life with this man. I don't think she's teasing him; I think they're finding a level and kind of realising that they could be fellow travellers in this.

What does Mimi make of Shine?

Oh he's lost, he behaves so badly and when he comes into her place, I think she's got his number all over; I think she thinks he's just frightened and strolling down the totally wrong path. For me that was the only time only scene as Mimi that I felt like I was genuinely disapproving of something that the other characters were doing. I remember when Richard wrote the outline for this character two years ago, he said if she had been born a few years later she would have been a suffragette and I think there's something about Shine's conduct with women that really provokes the political and angrier Mimi.

How does it feel to be a part of the final series of Ripper Street?

For me it feels like when I first came I was on the outside looking in and I am a big fan of these actors that I'm working with. So I was looking in through the window and just feeling happy to be around them and to be given the chance to come back in, in this series, and be part of the gang.

And finally you get to wear some absolutely amazing gowns and costumes; what's it like going from one tremendous costume to another?

I feel like I've been given a big kiss on the lips with this part; I get gorgeous costumes, gorgeous people to work with and they inspire and yes, Leonie was talking a lot when we first met about Mimi maybe getting her clothes from Paris and kind of being ahead of the curve in that way and she gave me a book which had lots of paintings and Toulouse Lautrec kind of references, which really helped my understanding just of like literally where Mimi's been in her life; she's probably been to Paris; she's probably in touch with that scene and she's that kind of far ahead in terms of fashion and culture in London, which really helped me place her, so it's been a privilege.