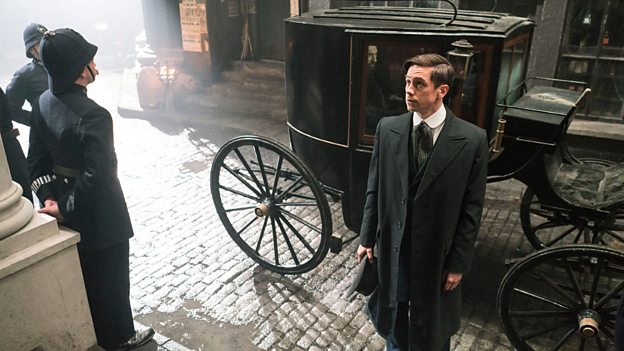 I love playing that conflict and I can't think of a role I've played where there was so much going on.Killian Scott

Category: BBC Two; Drama
To most of Whitechapel, Assistant Commissioner Augustus Dove remains the wunderkind of the Metropolitan Police. A liberal, forward-thinker who has brought much good to the East London streets, Dove is nonetheless a man harbouring a dark secret.

As we learnt, Dove is the brother of Nathaniel: the disturbed young man responsible for the series of murders that have been once more terrorising the community of Whitechapel. What’s more, it was Dove who covered up this fact, who let another - an innocent - hang in the place of Nathaniel. He acted at first out of a love for his brother, but increasingly Dove’s decisions seem to be born of self-interest.

He is finding himself trapped ever more firmly within a web of his own making. The only way he sees out of it is to bring down Reid, Jackson and Long Susan - with their death his secret dies also. He is, therefore, a man with a lot to lose: a man who will stop at nothing.

Where do we find Augustus Dove at the start of Series 5?

He’s brought Nathaniel to live just off his estate in this very rural cabin location while he tries to clean up the subsequent mess and to apprehend Reid, Jackson and Long Susan. And in my attempts to do that I bring in Jedediah Shine, who's obviously returning from previous seasons, and so I give him Drake's former position in Whitechapel. So he's the man who's leading the charge in pursuit of our fugitives, and the idea is to try and apprehend them as soon as possible so I can have the events of the last season dealt with and Nathaniel can maybe be reintroduced to society in some way or another; of course though these things transpire to be very difficult actually to bring to life.

What lengths will Dove go through to protect Nathaniel?

Well you know the fundamental idea behind my motivations in the show have always been this loyalty to Nathaniel, my brother, and as we've seen so far, there isn't really a limit to what I'll do in order to protect him. Now of course there's always, in protecting him I'm also protecting myself, so the motivation isn't pure, just at a level of protecting him, it's also protecting myself. And unfortunately what we discover as these episodes unfold is that I probably go to a greater extent than maybe people would expect and some of the things that I do are, they're not really morally ambiguous any more, they're just something you shouldn't do. It’s interesting as an actor because you know the thing you're always trying to do is trying to understand the characters, understand people in order to play them with empathy and with understanding. In the last episodes you get a greater understanding of Augustus Dove and Nathaniel Dove as people prior to all these events.

Reid's past has come to light and now Dove is perceived as the “good guy”. How does Dove react to the new perception people have of him?

There's a great degree of guilt with Dove and none of these events are ideal and I think it's interesting that none of the characters are morally pure, it depends on which sort of side of the fence you are on in life anyway, in terms of what appalls you and disgusts you and what doesn't. Reid is arguably as bad as I am, so I think what's interesting to play is that I don't see my actions as bad but essential and whereas I see Reid as more a character who has abused his position. And what I like about Ripper Street so much is that there is a lot left to the audience to decide for themselves.

What was it like getting out of the studio into a rural setting?

It's nice sometimes to be forced by a natural environment to just work within that, and you know where we're shooting Nathaniel's kind of cottage it's really beautiful. But of course we're exposed to the elements, there've been a couple of days where they've had to abandon it because we've been blown off the side of the mountain. But it’s just easier because you don't have to do as much work imaginatively when everything is actually really happening around you.

What are Dove's feelings towards Jedediah Shine when he decides to employ him?

The question of Shine in this season for Dove is an interesting one because I do think there is apprehension about giving him this position, but I would be familiar with his history and there's stuff I know about him that happened between him and the leads from the previous season that he was in. And I think it's because he knows Whitechapel and he knows these men, that he seems like the best guy for the job, but it's very clear from the very beginning that we are not on the same wavelength.

One of the nicest moments I think from when I arrived into the show is the tour of the police department and some of these ideas that I have, which are quite progressive. And Dove has this really strong belief in the possibility that crime can be eradicated, and the prisons should be empty, which I think is a really beautiful idea, whereas Shine is much more ‘lock them up and throw away the key’ type philosophy. I don't like the way he treats people, but at the same time I have to cover my tracks somehow and he seems like the best person for the job. Because in fairness you know, Reid and Jackson and Long Susan are proving extremely evasive, so I do need someone who has a greater knowledge of them and the area than I do, or than I can bring to the table, because obviously I always have to maintain a certain degree of distance. But it's interesting because Shine is a character who challenges me a lot and I think I underestimate him because he catches up with me and I don't think I thought that was a risk. You know, I think it was a risk to keep him in control but I didn't think it would ever turn into him getting the information on me, you know. And in spite of his methods, he transpires to be relatively effective, but I definitely have a problem with his methods, there's no question about that.

How does [Dove] feel about Reid?

I think I have a complicated perspective on Reid; there's a huge amount of respect, but I firmly believe that what he has done is wrong because he's abused his position of power. I put a great amount of sincerity in almost everything I say in the earlier season, before things kind of spiralled out of control in terms of policing and how I treat Bennet Drake, you know. It was really hard to lose Jerome actually from the cast because we had a lovely character relationship that was all based on mutual respect, and I have such a huge amount of respect for him as an actor, and Matthew and the others of course. And I think with Reid it's deeper on some level than what you would think because there's no doubt that he was a very brilliant man, but again there are key moments where he crossed the line and went from justifiable police homicide to murdering people.

How does it feel to be such a major part of the final series of Ripper Street?

Well to be a significant player in the conclusion of Ripper Street has been easily one of the most enjoyable experiences I've had as an actor, and obviously therefore as a person. And I just think that everyone in the production is extremely nice and generous and all the cast get on extremely well from the producers to trainee ADs. It’s been so layered and so complex and the relationships I've had, whether it's with David Threlfall playing Croker or Jerome as Drake, and Jonas as Nathaniel, and all these, I've just gotten the opportunity to work with these just ridiculously good actors, with really good material. You know when the writing is good, most of your work is actually already done and sometimes what the necessary skill of the actor is to not get in the way of the work, of the lines.

How does the role of Dove compare to other parts you've played?

I've never ever believed in the idea that this is just pretend: I just find that really boring, if you're just doing what looks like a happy face and what looks like a sad face; you've got to try and experience these things. But my favourite type of role, and I've only realised this recently, is a man I consider to be a good man under challenging circumstances, who ultimately has to make decisions that he would rather not make, and they are very questionable decisions, but he does them for the belief in something. And that's how I feel about Dove, is that it is a man who is fundamentally a good person, but is put into a very, very difficult situation and makes some awful decisions. But I love playing that conflict and I can't think of a role I've played where there was so much going on. In everything I've done, I've found almost all the characters relatively easy to understand, and I do fully understand Dove, but to actually have a handle on all of the stuff that's going on is really challenging. It's been an extremely satisfying thing to play and I'm going to miss playing the character because they've given me such extraordinary material to work with.