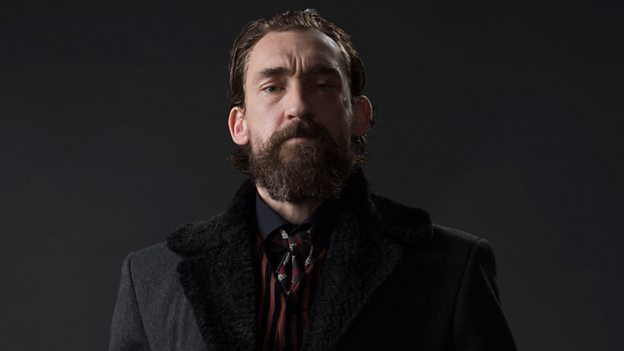 He's a corrupt law man and he's very aware of that and I think actually he wears that as a badge of honour.Joseph Mawle

Category: BBC Two; Drama
The end of Series 2 of Ripper Street saw Jedediah Shine push our heroes to dark actions - when the purportedly high-principled Reid screamed at Drake to bring the amoral K Division chief to a violent end.

It took Shine a long time to recover from that fight with Bennet Drake and he suffers now with a deep and chronic pain that he cannot always isolate or identify. And so, he started to self-medicate. With opium. Cocaine too. Lots of it. And as he grew stronger he took more. And more.

Now he’s back - damaged but still fighting. So it is with relish that he accepts Dove’s offer - that he assume the role of Head of H Division. He will command this dark guard in the maelstrom of Whitechapel, and he will install his corrupt and venal allies in all corners of its districts. And meanwhile he will search for the fugitive Reid and his companions.

What has Shine been doing since we last met him?

I'm sure he's been creating trouble for himself over in Ireland, in other places.

Do these episodes feel different to the first time you appeared in Ripper Street?

Yes in the sense there's an overall arc rather than a story per episode and I think that's a really great thing to have an arc of each character that's going right through it rather than, rather than something which is telling a story each and every episode or each and every two episodes. So I think that that is different and I really like that, which is one of the reasons I was very attracted to the idea of coming back and exploring that, and obviously Shine himself has changed a lot with certain facts of himself being known to himself; he's slightly more front foot here, where I think last time he was much more internally angry, which occasionally came out and was manipulative and very clever. He's still all of those things, but he is much more unable to hide his antagonistic feelings.

Shine has the full backing of the authorities this time around. Did this change how you played him?

He's a corrupt law man and he's very aware of that and I think actually he wears that as a badge of honour. He has a strange moral code within himself, which is being honest about what you are. And I think we're in a world where a lot of people are being very dishonest about who they are.

I mean Dove and Shine's relationship is an interesting one by the fact that Dove is a younger man with the power over Shine. Of course Shine is completely opposing to that, but very early on there's a crack somewhere in Dove and Shine notices it very quickly, and from then on he is pursuing it. But also he has a fascination by this person who is able to kill the person, so I am fascinated by who Nathaniel or who this person is who's doing the killings.

Can you talk about Shine's campaign for power at Leman Street and the dynamic between himself, Drummond and Thatcher?

Shine has come back with a knowledge, something deep within him that he knows is going to end soon, which is himself. And so it's about leaving a legacy behind. He can see how quickly Bennet Drake has been forgotten and how quickly he takes over that seat, that he himself could be forgotten that quickly. And I think the mortal side of him in the latter two episodes are the ones where he's really starting to lose any sense of that immortality, being aware of it, the fact that he chooses to take himself out of the picture rather than let anybody else do it is quite signifying to me.

How does Shine's relationship with Thatcher change over the course of the series?

When Jedidiah first arrives back in Leman Street he doesn't know who he's going to side with and then there are certain things that he sees in Thatcher, that he might be somebody who Shine could pass the baton on to. And so there's a kind of father son relationship in my head; the start or maybe more of an uncle nephew kind of relationship that starts to evolve, and they become quite close but ultimately the truth is Jedidiah's manipulating him to do what he wants to get done. And at a certain point, as soon as that relationship is broken, I'm afraid Jedidiah would just cut the umbilical cord very quickly, so there is no relationship any more. Ben's such a willing, open, sweet-natured man, and he's been great fun to have around as I get my antagonistic claws out.

Talk to us about Shine's own moral code. Is he a “bad guy”?

Jedidiah does have a soul, and I think that mostly is excavated through his relationship with Mathilda throughout these two, four episodes. And the fact that he knows what good it is and he doesn't want to corrupt good; if good is real then I accept it; it's when good is actually not good, that's what gets him. He's intelligent enough to know that his actions are done as a consequence of what's happened to him throughout his life. But when he witnesses somebody who is purely good as in Mathilda, he wants to protect her from this world of corruption.

Is Shine a champion of the truth?

I think Shine is a champion of truth; I think that's an absolutely perfect way of putting it, and that truth may be unpleasant and difficult. That's the moral code really; be who you are; if you are who you are, I will support that and let you go but if you're trying to pretend to be someone you're not, I will find you out; I think that's basically Jedidiah's motto and moral code if there is one.

What does it mean to be part of the final series of Ripper Street?

Being able to come back and be part of the final series of Ripper Street is a real honour, you know. It'll be sad to see this show go; I know, and hopefully the idea is to try and leave it a bit like Jedediah; wanting to leave a legacy of some sort, you know I'm sure the show will leave its own legacy of some kind, which hopefully will be triumphed and trumpeted afterwards.