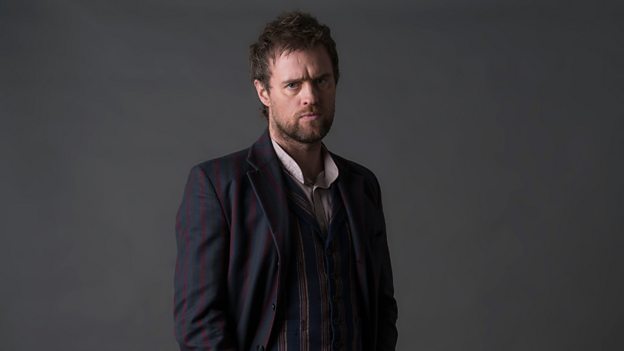 Nathaniel doesn't set out to kill people, there is just some sort of blood lust in him; there's some sort of thirst in him, which makes him do this and it's impulsive, it's animalistic, it's instinctive.Jonas Armstrong

Category: BBC Two; Drama
Nathaniel has been a man of mystery up until now - apparently no more than a hired heavy, a brutal nobody. It was only in the closing chapters of series four that we learnt of his relationship with Assistant Commissioner Augustus Dove - brothers, no less - not to mention his murderous proclivities.

Nathaniel is a man tormented by a traumatic childhood, and doomed to act out that torment through acts of savagery and murder. It was by his hand that Bennet Drake met his death. Augustus knows that if Nathaniel is caught and tried, both of their lives will be over. So Nathaniel must keep a low profile, must evade the fugitives - Reid, Jackson, Susan - until they are caught by Shine and his attack dogs. Can he control his murderous impulse for long enough?

What has been happening with Nathaniel since the end of Series 4?

Well at the end of last season he murdered Drake in quite a sort of vicious horrific manner, and since then he's been on the run. So basically he's been in boarding houses in and around Whitechapel and the surrounding areas, but he's aware that Jackson and Reid are after him. Dove coaxes him out of hiding because the arrival of these wolves come, and he knows that that will draw his brother in.

Does playing Nate “on the land” feel differently to how you've played him before?

Everything we've done before has been on the wharf by the river side, or on location or in the studios, and it's full of people, there's lots of activity, you know, it's in the centre of Whitechapel or on the docks, so this is completely different. In episode ten we're out in the wilderness, we're on Hackney Marshes essentially, so it's completely different from anything that has been done before.

Can you tell us about Dove and what informs his behaviour towards his brother?

You learn about their back story, Croker adopted them basically; he found them on a ship which came in and he saw some sort of potential in Dove, with his brains, and with Nathaniel he saw something else. He sort of used Nathaniel as a work horse, as a labourer and also because of Nathaniel's ability to fight and his strength… he would use him as a weapon, or as an intimidation tool, one that he's able to dispatch at will.

Tell us a bit about the power play between Dove and Nathaniel now that Croker is gone.

Dove is the older of the siblings and he's very much got the brains; Nathaniel is a man of simple means and maybe simple mind. Dove is able to control Nathaniel because Nathaniel looks up to him as his brother, as his saviour, he has him on a pedestal; he idolises him essentially. So Nathaniel owes him a lot and this is why he's here. You know, Dove has done this out of love for his brother even though he's essentially a monster in what he's done to the people of Whitechapel, he's still this guy's brother. So that's a redeeming factor in terms of Dove, but yeah, so that's where the power lies.

In episode three you see a different side of Nathaniel; you see the human side of him. Before all you see is this sort of vicious monster, he's referred to as this monster, this beast, this Golem, but in this episode you see that he has got the ability to interact with people; he has got the ability to feel kindness, to feel tenderness, and then the opposite, for that to be played against him.

How does Nathaniel's relationship with Long Susan play out?

The first time you hear Nathaniel speak is to Susan and this is a man who has never had any interaction with women whatsoever, he's extremely shy, extremely awkward. And Susan sees him as a means to an end at first I think, but then she sees something in him, like this human aspect, and knows that he's not just this brute, this animal, that he has got the ability to feel.

How do you get into the mind of a killer like Nathaniel. Is he capable of redemption?

I guess that we all have some sense of the darkness in us, in our mind, in our psyche: it's just trying to access that. I don't think he is an evil man, I think that he's mentally unwell. People had no knowledge of the human mind, and why people act in the way that they do in terms of mental stability and mental illness, so Nathaniel doesn't set out to kill people, there is just some sort of blood lust in him; there's some sort of thirst in him, which makes him do this and it's impulsive, it's animalistic, it's instinctive. It’s not pre-meditated, it just happens. Dove even says that there are doctors of the mind, which Nathaniel's completely unaware of. He wants to be good; he wants to change, so that's what's fascinating about him because he's not essentially an evil soul and can be redeemed, but maybe he's past the point of redemption because of what he's done.