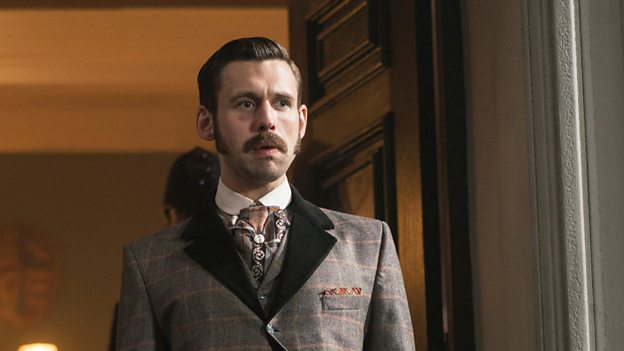 It's brilliant to be here at the end of this series; it's been going for five years, five series, and it's been such a huge success and it's a show I love, so to be able to see it out is amazing.Benjamin O'Mahony

Category: BBC Two; Drama
Francis Thatcher has proved his worth as an H Division copper - unafraid to use his fists but also, and perhaps he keeps this a little quiet, able to employ a sensitive touch, a higher minded-form of policing.

With the old guard gone from Leman Street - Drake tragically dead and Reid and Jackson fugitives - Thatcher finds himself working beneath the legendary Jedediah Shine. Shine’s methods could certainly never be described as sensitive, and Thatcher will be forced to decide what kind of policeman - and man - he wants to be.

What has Thatcher been up to since we last saw him?

A lot's changed because Drake has died, the guys have gone on the run, everything's changed and shifted. He's in limbo slightly and since the last time we've seen him, it's only been a couple of days and everything's changed and we've got a new kind of chief inspector in, who's running the place and it's a confusing time for him and he's just trying to struggle to stay afloat really.

How has Thatcher been affected by aiding those on the other side of the law?

Thatcher's changed so much since we first begun, and when we first meet him at the beginning of Season 4, he's cocky, he's very sure of what he thinks of the world and then Reid comes along and he has a different approach and it really kind of slowly brings Thatcher out and he develops a conscience. He gains more and more integrity as he goes along and I think, I personally find him someone with a huge amount of integrity. He ends up becoming an inside man for Reid and the other guys who are on the run, so he's caught between his responsibilities in the nick and his allegiances to his old bosses. He's caught between these two allegiances, and there's only a small amount he can do for the guys that are on the run especially when he gets demoted to Desk Sergeant, he's even more impotent because he's stuck behind the desk.

How does Thatcher's relationship with Shine change as the series goes on?

When we first meet Shine, he seems like someone that Thatcher would immediately look up to; he's hands on, he's got an amazing record behind him, and Thatcher clings on to him, he looks up to him, as a big brother, as a father or as someone to really get behind. But then slowly as the season goes on he sees the true Shine, the Shine that's a psychopath, the Shine that's a sociopath, the Shine that wants to hurt people and break things, and Thatcher, two, three years ago would have loved that, but then as the season goes on, Thatcher sees Shine for what he truly is. It is really a relationship which is set up to go perfectly together and then it just disintegrates because Thatcher's developed a conscience despite himself.

How do you feel about being part of the final series of Ripper Street?

It's brilliant to be here at the end of this series; it's been going for five years, five series, and it's been such a huge success and it's a show I love, so to be able to see it out is amazing.