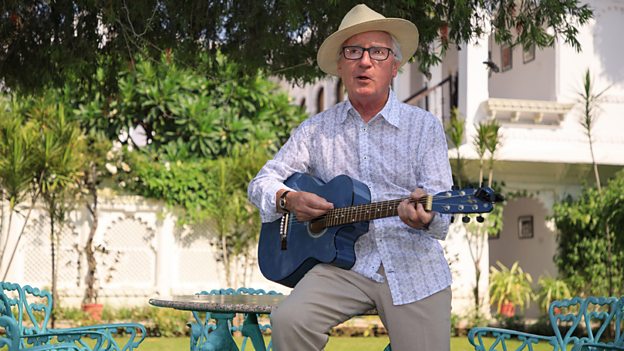 There were certain places we went to that were very spiritual and you could do nothing but think - wow, this is what they come here for - to find peace of mind.Syd Little

Meeting the people. They were so nice. Wherever we went whether it was the lower class or the Maharaja. They seem so happy and I think we’ve got the problem, not them, in regards to the class statistics.

They were really so nice, the little kids in the street, they can’t do enough for you. They’re just so happy to see you. I remember one incident when the Krankies were on the show and Janette came out the taxi in the village and the little children would see her and make a beeline for her! They were fascinated by this little person and they couldn’t figure out how old she was. They’d ask the interpreter and she said 70 and they go “wow!” They couldn’t grasp it.

It wasn’t as picturesque as I thought it would be. It wasn’t as lush as I thought but we were only in the North West and I‘d love to go down to Madras in the South, where the tigers are, because there is only panthers up near us.

Ian and I were the designated cooks. We went to the cookery lessons by an Indian lady. She was lovely, it’s in her home, and she taught us how to cook certain things, chutneys and naan breads. We had a great time, me and Ian.

Tell us more about the group.

Me and the Krankies have known each other for 50 years. At night after the cameras had gone, we used to sit down with a bottle of wine share it between us. Pete Dean - he was nice. They were all nice. I love Stanley Johnson, he was my hero because he’s 77 and I thought I was the oldest there. Between 6am and 8am every morning, because you’re always up early there, the little swimming pool was just outside our rooms and all of a sudden you’d hear 'sgadoosh!' And we’d go, "there goes Stanley"! Every morning he’d go in the pool. Fit lad. Lovely man.

Yes, it did. There were certain places we went to that were very spiritual and you could do nothing but think - wow, this is what they come here for - to find peace of mind.

Yeah, I’m going too fast. I’m 75 years of age and I’m still whizzing round like I’m 21. And everyone keeps saying “slow down” and I think the world’s passing by. I remember the first time we went on holiday a few years ago and we’d had a very busy two years in showbiz. We went to a hotel in Barbados and we just finished the series and we zoomed out there, got off the plane and it was like we got off in a different time zone. It’s the same with India, it just had that feeling that time didn’t matter. That’s what I need to do, slow down and enjoy the moment.

We had to cook a meal, Ian and I, for Bob, because he couldn’t take the spices. We went into town and eventually we got loads of veggies and potatoes for Sunday lunch. We asked where the butchers were and it was more like a slaughter house than a butchers. Bob lived on a farm all his life, Ian’s dad was a butcher and we couldn’t get beef because cows are sacred, the lamb is mutton which is rubbish and goat is a no, no. The only thing there was a chicken… live chickens… and need I say more?

I’d go back but not to Rajasthan. I like to go to the south and see the difference, I bet it’s more luscious down there, more ‘jungley’ type. Now I’ve seen Rajasthan, I’ve seen real India.

Tell us something else about the trip.

When we first got to the airport, we didn’t know who we were going to meet and when we got there and saw everybody, I felt out of my depth because there was films stars, MPs... And I thought wow, what’s this little from a working class family going to do with this lot. Then when I saw Ian and Janette - it was great. It was daunting but when we got to know each other it was brilliant. I think I got on well with everybody. I’d like to hope I did.