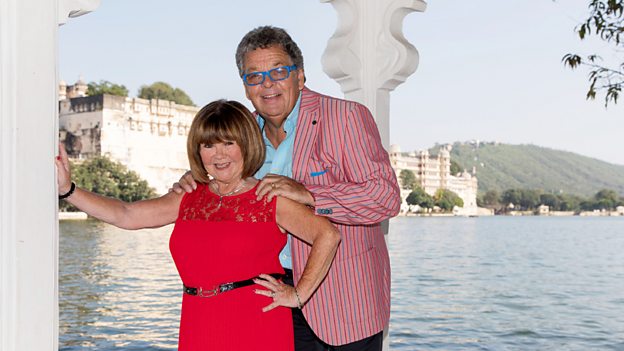 The thing that surprised us the most was the huge difference in wealth and class. The gap was much more than in the UK.Ian Tough

Category: BBC One; Factual
Interview with Janette and Ian Tough, The Krankies.

Janette:  The most memorable part of the experience was the people of India, especially the children, although they had nothing in the way of material things like in the UK, they were so happy and cheerful and most polite.

Ian: The thing that surprised us the most was the huge difference in wealth and class. The gap was much more than in the UK, however the people seemed more content with their lifestyles than we are in the UK.

What were your roles within the group?

Ian: I saw myself as the cook when we made our own meals. Janette was the dancer of the team and the children's favourite - following her everywhere she went.

Ian: My best adventure and laughs were when Syd, Bob and I went to the market to buy veg and meat to make a Sunday Roast for Bob, as he was not a lover of curry. The butcher didn't speak a word of English and none of us could speak Hindi so trying to buy some lamb became a comedy sketch and ended up with us first being offered goat, which I thought would not be appropriate as Selena has a goat farm in Yorkshire where she breeds for wool. We ended up with live chickens, which upset Syd when the butchers slaughtered them in front of us.

Janette's adventure was on the train… I use the word train, but it was more like a cattle truck. It was a 10 hour trip to Jodhpur and Janette was the only girl to travel with us, apart from the crew. She was on the upper bunk in a two space bunk and across from us in the four berth was four Indian men. Janette had taken half a sleeping tablet and was sound asleep when an almighty fight broke out across from us between the Indian men. It was more vocal that physical, but gave Janette such a fright. Once our crew settled them down and the trouble maker was removed, all the Indian men in the carriage came to apologise to Janette for such bad behaviour - it was very touching. When we got to Jodhpur, Janette had a lovely time with the president of the polo club’s wife and granddaughter, having afternoon tea at their house.

Janette: We would return to Udaipur just to visit the family who ran the Amet Haveli where we all stayed for the month, as they were the nicest, friendliest people we have met in many years of travelling the world.