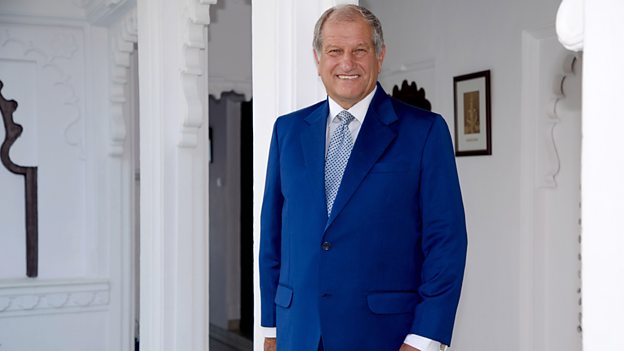 It did make you realise a lot of things in life, materialistic things, you don’t really need.Bob Champion

The people. What a friendly type of person they are. The children were out of this world. So friendly! You always have the impression that everything was dire out there but it wasn’t as bad as was expecting it, to be honest. They all seem to be, especially children going to school all in their uniform and everyone happy and smartly dressed.

The women doing all the work! When we were going down their equivalent of the M1 we pulled up at a toll booth and there was about seven women, one with a pick axe, one with a shovel, one with tarmac and everything and the guys just standing there watching them repairing the road. In the countryside, all the women were doing all the work in the fields and the chaps were sat on the gate posts having a cup of tea. It was a different type of world.

Do you think that’s because they’ve moved further in terms of equality or that the traditional role of a women is very different out there?

I think they’re still doing their traditional role over there, especially in the countryside. I suppose in the cities things are going to be different, go with the times. It was a really interesting place, I was told a little bit about the arranged marriages and that still goes on in quite a big way.

Do you think the women and the young girls who are involved in those marriages are pleased to be part of the tradition or are they pushing against it now?

I don’t know if they’re pushing against it or not actually. I met a few people over there who have been married a long time and it was an arranged marriage and they said they’ve been really happy. I don’t know. One lady was telling me, she met her husband for tea two days before she got married. She’s been married to him for about 40 years.

We all got on really well. There wasn’t any leaders or anything. I was the one that was always on the naughty step, I used to go walkabouts! Stanley was just the brain of Britain - well brain of the world actually! But what a lovely man. Fantastic fella! If you want to know something, ask Stanley!

Yes it did actually. It did make you realise a lot of things in life, materialistic things, you don’t really need.

I realise that people you’re fond of have to come first. Don’t take anything for granted. That’s one thing I really did pick up there.

When I went up to Jaipur, seeing the castles there. I loved that! The castle there… it was about 1200 when it was built and it’s still standing - that was amazing. The thought that had gone into it to protect your city, I think it held about 3,000 people inside and 100 horses. They had a well in the middle of it so if there was a siege, they had enough food and water to last a year.

I would go back. I suppose if I went back I would go to travel around the country.

Do you think it’s a good option for people wanting to retire somewhere warm?

Of course it is. It is cheaper to live out there but not that much. The medical side wasn’t too bad actually, we went to a hospital and the fees weren’t too bad especially on the private side. It was definitely a little bit cheaper too.

How did you get on with the curries and the food?

I never had a curry in my life before I went to India, they’ve never really applied to me and I will never worry if I never have another one ever again! The curry lovers over there were getting a little bit sick of curries! My real treat was cheese and mushroom on toast, I could have it every day if I wanted it.

Can you tell us something else about the trip?

When we went to the fiestas the kids were absolutely amazing. Janette - they just loved her. There were hundreds following her around and they didn’t know who she was and they absolutely adored her! Everywhere we went Jeanette was the star with them!