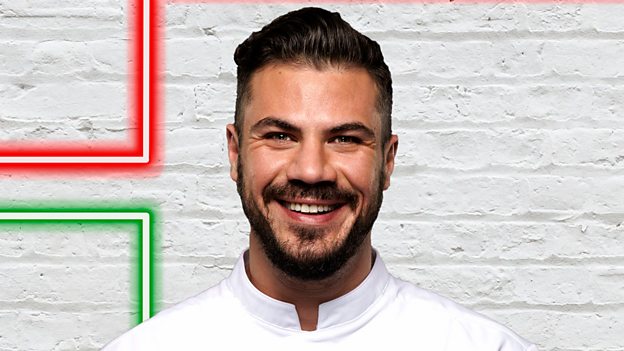 I broke two ovens! I didn’t have any food disasters, I just had all the equipment disasters, because I destroy everything!Akis Petretzikis

Category: BBC One; Entertainment; Factual; Daytime
Akis discovered his true love was cooking whilst training to be an accountant.

Within a year of finishing his degree he had gone on to become the first Greek winner of MasterChef, and later became Head Chef at Michel Roux’s Avenue Bistro. Since then he has become a regular name on Greek TV, fronting several of his own cooking shows, and even hosting the Greek version of Ready Steady Cook. With his own line of cookbooks, food products and his own (bilingual) YouTube channel, this is not a chef who shies away from a challenge.

Have you ever done cooking on TV before?

Yeah, but not in the UK. I’ve done a little bit of everything in Greece where I am from. A little bit of MasterChef, Bake Off, and I hosted Ready Steady Cook…

What was it like working with the other chefs?

The truth is that when you’re working with other chefs there is great competition and stress. But as soon as I met the other chefs, they were so friendly and (yet) competitive, but in a healthy and creative way. A kind of competition that didn’t go over the top and so everyone had a great time and enjoyed what we were doing. I built a unique friendship with the guys and we still keep in touch, almost daily!

What has been your proudest moment on the show?

The moment I was offered to participate in this production, I felt very proud since I was given the chance to introduce the Greek cuisine and the Mediterranean flavours to the whole world through an acclaimed TV show.

What do you think viewers are going to like best about the new show?

I think that the whole concept is special. A super talented presenter welcomes the audience, the contestants, and the viewers to a unique TV show during which some of the best use beautiful ingredients and transform them into original recipes. All these are enough to make people love the show; a show that has an amazing production behind it, constantly making sure that everything runs smoothly, as well as a unique TV channel that supported us from the start - before we even got through the studio door.

What were your favourite dishes on the show?

What were your biggest mistakes or regrets in the competition?

I broke two ovens! I didn’t have any food disasters, I just had all the equipment disasters, because I destroy everything! But that’s just me. Thank god production were always there fixing things…