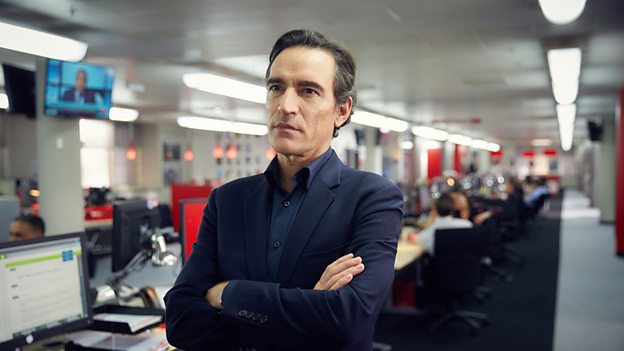 Describe the show in a sentence? I would call it a tale of two papersBen Chaplin

Interview with Ben Chaplin, who plays Duncan Allen, Editor of The Post.

Tell us about your character?
I’m playing Duncan Allen, who is the editor of The Post. We meet him at the beginning of this in a mid-life crisis - definitely. I think that he has probably become desensitised to what he does. He works extremely hard and has become unhappy at home. He has become numb, I think.

Duncan Allen definitely considers himself as a journalist first and foremost, but as he’s moved further and further away from being an actual reporter he is compromised by commerce rather than reporting. He has to please an owner. As do all editors, they have to please their owners first and foremost… so to what extent are they a sell out? To what extent are they willing to put their jobs on the line to have a front page or an editorial that they believe in?

How would you describe Duncan and Holly’s relationship?
They are cut from the same cloth. They are true journalists. They are on different sides of the business, but they are both instinctive journalists.

What can you tell us about the story of Press?
It’s about two papers. Two papers that are not even necessarily competing - I think they cater to different markets. But certainly my character Duncan sees the whole thing as a competition. He’s definitely a businessman, but considers himself a journalist.

Tell us about Mike Bartlett’s scripts.
He’s a real yarn ripper, Mike. You’ve got to look at Doctor Foster for that. He’s more interested in it being an exciting story than anything else. If that happens to reflect something topical then great.

Describe the show in a sentence.
I would call it a tale of two papers.