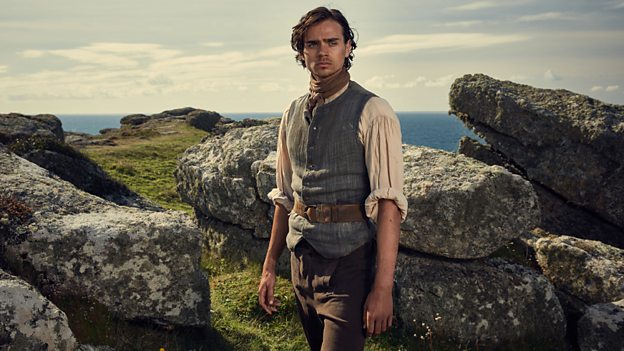 Sam is a fascinating character to explore because he has a powerful conviction that he carries with him; he is a fervent Methodist and is on a mission, as he perceives it, from God to save the souls of the people of Cornwall.Tom York

Category: BBC One; Drama
Playing a fervent Methodist in one of the biggest dramas on TV was a challenge for Tom York.

He reveals what it was like playing Demelza’s brother, Sam Carne, in the new series of Poldark.

"It is a bit daunting coming into an already established drama, and such an iconic one at that, but the whole cast and everyone in the crew were all so welcoming which helped to make the transition into the show really easy. Eleanor (Tomlinson), who plays my sister, was so great and gave Harry (Richardson) who plays our brother, and I time to get to know her so we got to build up a rapport before we started filming which was great. Those are gifts you don’t usually get.

"The three of us have become good friends and that has made such a difference with playing a family on screen because you have a freedom and a short hand on set."

The chance to play a devout Methodist initially drew Tom to this role.

"Sam is so different to me and it is such a gift to play someone who has an unusual point of view but one I was really excited to investigate. Sam is a fascinating character to explore because he has a powerful conviction that he carries with him; he is a fervent Methodist and is on a mission, as he perceives it, from God to save the souls of the people of Cornwall. It is very rare as a young man to get to play a part where there is a real principle.

"Sam has had a tough life; he had an abusive father, his mother wasn’t around, he lives in poverty, his sister leaves and as the oldest of the family he is trying to look after everyone else. He soon finds this very dogmatic, rule based form of Christianity and it saves his life. In 1794 religion was such a powerful aspect and God is in everyone’s lives but especially in Sam’s."

With a great responsibility put upon his shoulders it is no wonder why Sam sees such highs and lows this series. Tom tells us what is in store for his character…

"At the start of the series disaster strikes however this finally allows Drake and Sam this freedom to get out of the horrible situation in which they have been living. The two of them take a gamble and ask Demelza if she can provide them with any opportunity and she very graciously does.

"As the series goes on there is trouble with George Warleggan (Jack Farthing), there are problems with the local church as Sam starts to develop his own flock and because he is a charismatic preacher he gains a following and place in the community which disrupts a few things. Sam also has a love interest, which is very difficult for him because he is supposed to be devoted to God but he can’t help himself and he falls in love with the wrong girl."

Sam’s intensity definitely rubs Ross up the wrong way a few times but Tom assures us it all comes from a good place.

"For all of Sam’s perceived high and mightiness and religious conviction, at the core of it is this pervading love for his siblings and the wider community. God has saved him and all he wants to do is save everyone else. For Sam this is reality, not just an abstract concept and so the stakes are high which naturally causes friction.

"Ross has been very generous to Sam and Drake but he also sees things very differently and if anything is a block on bringing Demelza to Methodism it is Ross and so they have a fractious relationship and a few disagreements. Ross probably quite quickly regrets taking the boys in!"

In addition to playing such an interesting character, Tom has also really enjoyed wearing his costumes.

"For me personally costume is really important as it gives you so much of your character. Sam wears a worn down, miners outfit for a lot of the time and it helped me get into the zone and the time period. It was very cold; they didn’t have thermals in the 1700’s! Sam also has his preacher outfit for when he gains a little bit of money and notoriety within the community, which I adore. It gives me a sense of gravitas, I felt the command and power and when you get the costume right it gives you so much for free."

For Tom though, one of the best parts of this job was getting to see Cornwall in the sunshine.

"Cornwall is one of the most beautiful places in the world; I had never seen anything quite like it before. Those cliffs with incredible sheer drops to the ocean and the sunset right in the middle, it’s amazing. When you’re stood in these incredible landscapes with your costume on and you can barely see a technological device in sight it really does feel like you are there, it’s a special place. Luckily for us, one of the first things we did was film all of the exterior scenes in Cornwall. That really established so much for us and when we went to the studio we had that sensual memory which was really useful."

Whilst filming Poldark has been an amazing experience for Tom, he pinpoints one specific moment he will always remember.

"One day we were shooting a scene where Sam is preaching outside the mines and it is the scene I did in my audition that I always thought honestly shows Sam for who he is. I really enjoyed that day of filming and felt I really connected to Sam. It seemed, to me, like the epitome of the character and it was shot in Cornwall with the sun shining and it was one of those rare, perfect moments on set that I will remember for a long time."