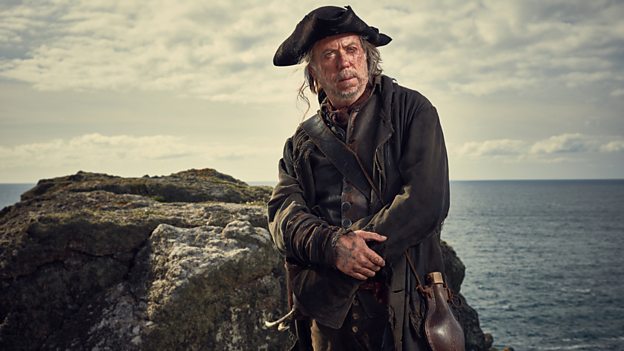 Tholly has been away from Cornwall for 13 years, he is a salty sea dog/pirate/freetrader but calls himself a fixer - he is man of means, maybe in today's terms an entrepreneur. There is room for debate.Sean Gilder

Category: BBC One; Drama
Sean Gilder was drawn to the role of Tholly Tregirls for the chance to play a character with some lightness and a sense of humour.

"In my career I've done lot of comedy on stage but it seems most of my work has been in heavy dramatic, contemporary drama; nothing I could show my children! For a while I've really wanted to introduce some of the lightness and comedy of my own character into the work so Tholly fitted the bill perfectly."

Sean explains that after reading scripts for the third series he sat down to watch the first and second series of Poldark and was hooked.

"It was very exciting to see how good it was and I saw Tholly as being a completely different element. I enjoyed Aidan (Turner's) portrayal of Ross Poldark so much and then seeing there was a new storyline for him having a friend and connection to his past and his father.

"On initial read Tholly is very much a large character from another world. He has been away from Cornwall for 13 years, he is a salty sea dog/pirate/freetrader but calls himself a fixer - he is man of means, maybe in today's terms an entrepreneur. There is room for debate. But he is believable which is important when playing such a far out character with scars and a hook in the 20th century, but it does work.

"Debbie (Horsfield) has written a beautiful character. From the books and Debbie's scripts it is clear he is the comedy element however after I had seen the makeup lady and discussed his look and his scars and tattoos, I wanted to work out where they'd come from. So we gave him a history and I started to think here is a man of great wisdom even though he has no education, he is experienced in life. He would have seen a lot of death and suffering probably and come out the other side always finding something to be positive about, one of those roll your sleeves up and get on with it people.

"It is interesting to give him that wisdom. Tholly believes he knows Ross better than anyone as he knew him when he was a boy. And Ross is no idiot so we need to justify why he would want this man back in his life. Ross wouldn't want him around if he wasn't believable and useful to him. Aidan and I had a couple of chats before I started and it helped me to see him in character in the previous series so I was able to see what Ross has had to deal with. We've seen snippets of Ross' humour before but he's kept it under wraps until Tholly helps bring it out."

Given that Sean has scars and multiple tattoos he spends remarkably little time in the makeup chair.

"Pippa (Woods) is amazing and started out taking up to two hours to do my scars and tattoos, fresh every time. But by the end had got it down to an hour with her team. Even though I have three prosthetics on my face and fish skin over my eye for a scar that, in Winston Graham's book he says makes Ross' scar look like a cat scratch!

"Tholly has loads of tattoos and I was interested in the meaning behind them.... he has an anchor and a turtle on his hand which meant you'd crossed the equator and sailed over 5000 nautical miles, and sailed the Caribbean and Indian Oceans - where turtles swim.

"The seagull and cross on his neck tell a story that he has been all over the world. There are some above my eyes, and initials on my hand and I made up stories of his lovers to make the makeup ladies laugh."

"My favourite author is Joseph Conrad, he was a merchant seaman and most of his work involved the sea. Better than any author he describes the hugeness of nature, the power of it and how we humans are pinpricks and that really helped with imagining Tholly. The basis of what Conrad says, that we are mere specks, I feel in Tholly's words 'live for the moment say I be damned of the consequence'. It may seem irresponsible but it is also very deep."

So did Sean feel the pressure of joining such a successful drama?

"When it got down to filming I felt pressure on the first day because finding a character is always difficult and by unfortunate scheduling it was a dialogue heavy first day... but it still seemed to work. I quickly relaxed into it and have to say it was an absolute pleasure; one of the nicest jobs I've ever had. The cast and crew are lovely. It was a real joy."

"I've been on holiday to Cornwall few times, and love it. Two years ago we took the kids down to explore a beautiful part of the world. During filming I particularly enjoyed staying at St Ives for a week as I'm a bit of a foodie and they have very good restaurants. My wife came down for three nights so we had a real gastronomic treat."