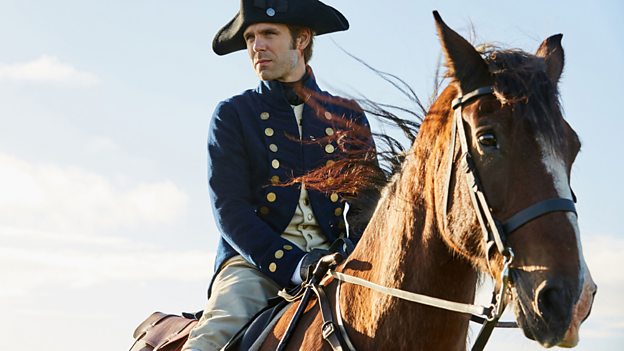 I watched lots of videos and listened to interviews with people who were suffering after having been to war or going through a difficult experience because, although the show isn’t necessarily as dark as most of these people’s real lives, you also don’t want to trivialise things like that.Luke Norris

Category: BBC One; Drama
Playing a prisoner of war took a lot of preparation for Luke Norris, whose character Dr Dwight Enys is captured by the French in the third series of Poldark.

He sets the scene.

"At the end of the last series Dwight has been reunited with Caroline but he had already signed up to the Navy and is obliged to go to war. So at the start of series three is away on his posting, on the travail.

"A French fleet wrecks the ship he is serving on and he is thrown into, what is effectively, a prison of war camp. It would have been horrific, there are people being murdered and tortured all around him while he tries to hold it together and save the people he can without proper equipment or supplies."

And in order to look the part Luke wanted to lose some weight.

"I was conscious it may not ring true if I wasn’t a little more angular than usual. So I did a diet and exercise regime to look a bit more drawn. The lack of sleep due to our new baby probably helped too and I got that for free! Perfect timing."

Another element that Luke wanted to delve further into was Post Traumatic Stress Syndrome (PTSD).

"Because of this element which our writer, Debbie Horsfield, has added to Winston Graham’s story, I did a lot of research into PTSD. I watched lots of videos and listened to interviews with people who were suffering after having been to war or going through a difficult experience because, although the show isn’t necessarily as dark as most of these people’s real lives, you also don’t want to trivialise things like that.

"There was no documentation from the period because PTSD was only diagnosed after the First World War but even then it was called shellshock and people weren’t really au fait with it the way we are now. The whole idea of life back then was cheaper in some respects, people were expected to live shorter lives and to endure hardships in a different way and men were expected to just cope in the same way they are now in a lot of societies and cultures. The notion of PTSD playing a role in the way a man’s mind behaves after the event would have been scoffed at."

And what of Dwight and his beloved Caroline Penvenen this series?

"A lot of the things that they feared may be the case when they come together manifest when they do get reunited in the series but because of what they have each been through there is some friction between them.

"Caroline was obviously pining after Dwight and waiting for him to come home but then when he does come home he is not the attentive sweetheart who left, he is brash and difficult and unwilling to let her in to his world."

There are lots of new cast members this series, what do they bring to the process?

"It completely changes the atmosphere on set. The new cast are all really lovely people and they are also younger than a lot of us so there is a lot of enthusiasm and excitement and it reminds the rest of us how lucky we are to be filming this drama. Josh (Agnew), one of the directors, has a real boyish excitement about him as well and Stephen (Woolfenden) too, the other director, had a real enthusiasm and this year everyone felt fortunate to be there.

"That sort of zeal definitely makes the early starts more bearable, particularly when you’re out on location in the woods and it’s freezing cold and raining, it helps to have those personalities around."

Were there any new locations this year that Luke was particularly struck by?

"Bishops Palace in Wells, where the prison scenes were filmed was really incredible. Vast rooms with wonderful ceilings that were beautifully lit by our DOP (Director of Photography) and the art department did an amazing job of making them look authentic. That location definitely sticks out for me because I did a lot of tricky filming there and I am looking forward to seeing how it looks on screen."

And what sort of reception does Luke receive while out filming on location?

"Because I play someone who is morally upright and generally on the right side of things people are very generous and kind to me and assume I will be quite nice. I think Jack (Farthing) has a very different experience because he plays someone who is generally not very nice. I am lucky that I am met with the generosity of spirit that Dwight has with others."

Luke is currently under commission with the Bush theatre to write a play. Another of his works Growth is going back out on tour with Paines Plough this summer.