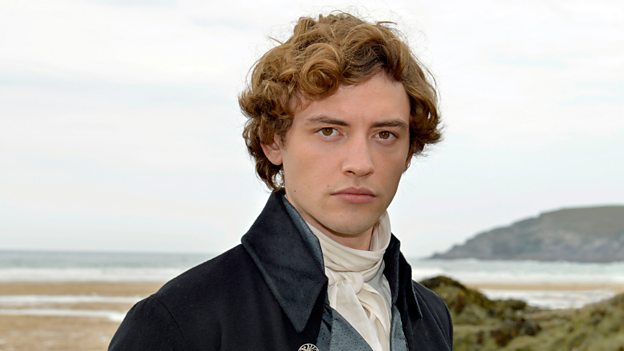 I really feel like I can relate to Hugh as he is a creative, he is into the arts and literature and is a genuine romantic.Josh Whitehouse

Category: BBC One; Drama
Josh Whitehouse joins the cast of Poldark this series as Lieutenant Hugh Armitage, a romantic aristocrat with his sights set on Poldark’s leading lady.

"Hugh is met by Demelza (Eleanor Tomlinson) at the beach when he first returns to Cornwall and he is blown away by her, he has never seen a woman like her as most of the men in Poldark haven’t.

"The two of them really connect and become friends but there is an attraction and he can’t take his eyes off her or deny the way he feels towards her and possibly the way she feels about him. He just wants to know how she feels and to be able to get it off his chest but it is a very treacherous game."

Having previously worked with Eleanor, Hugh tells us how having a familiar face on set made the transition into the show a less nerve-wracking experience.

"I played Eleanor’s brother in a movie we did last year called Alleycats and so it was not my first time working alongside her. It was actually Eleanor who suggested I audition for the role. She is fantastic to work with and going on to such a big production it was really nice to have someone by my side. It can be very daunting going on to a set so it made me a lot more comfortable.

"Poldark is an established drama, not something being made from the ground up and so it already has such a high standard in place and as I am quite a new actor, I certainly had my nerves about it. However it was really nice to be able to watch the world I was entering before hand and I was quickly reassured once I got on set as everyone was so friendly and easy to work with. Everyone is at the top of their game and I found it all very inspiring and have learned a lot from the experience."

Josh tells us a little about Hugh, revealing the similarities between himself and his character.

"I really feel like I can relate to Hugh as he is a creative, he is into the arts and literature and is a genuine romantic. Hugh refers to himself as an artist and I, myself am an artist, and like Hugh I also write poetry and music and so his interests are things we genuinely share.

"He is an aristocrat, born into riches and high society but there is a misunderstood part of Hugh’s story and so my aim is to try and get people to understand him, to see him for who he is. I wanted to portray him in a way that would allow people to feel for who he was and where he was coming from and try to bring some light to Hugh rather than purely seeing him as a villain. He is a person who follows his heart and acts out of love, despite the fact that it could be seen as quite controversial and may have serious consequences."

Josh has enjoyed being part of the drama and has made some good friends during the process.

"Something that I will take with me from this experience is the collection of friends I have made. There was a particular little group of us who spent a lot of time together going on all sorts of adventures around Cornwall. We would spend days together playing sports and then we would all gather around on the sofa and watch really scary films. Tom would be squealing away…!"

Josh states why he thinks Poldark has hit a chord with audiences around the world.

"Period dramas are so popular in the UK as they have an element of this historic story telling about it that people connect to no matter what age they are. Poldark has such an exciting side to it on top of its rebelliousness and adventure. A lot of period dramas tend to cater to an older audience but Poldark is so action packed and the acting is so strong so it appeals to a wider audience."

Next on the horizon for Josh is a very exciting project.

"I am about to go to America for my first lead role in an American film. I am doing the remake of Valley Girl from the 80’s. I am playing Nicholas Cage’s part, Randy, and it is going to be a big musical. Jessica Roth, who was Emma Stone’s friend in La La Land, and I are the leads and I am very excited."