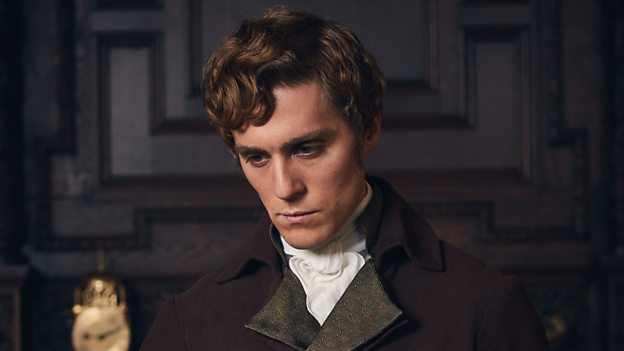 There will always be tension between Ross and George; they have a chemical reaction to each other.Jack Farthing

Category: BBC One; Drama
Jack Farthing reveals that his character and Ross Poldark’s nemesis, George Warleggan, is on the up at the start of Poldark series three.

"George’s status, power and wealth have grown since the end of the last series and at the start of the new series we find George opening his first bank. He is more of a force to be reckoned with financially and socially. He has the woman of his dreams, Elizabeth Poldark (played by Heida Reed), and they are expecting a child so he finally has an heir on the way and is living in Trenwith, Francis and Elizabeth’s house. Naturally he is changing the décor, making it a bit wealthier and gaudier. So it all seems well and as if it could all run smoothly for George but inevitably, fairly soon there are hiccups, which propel him into this series."

At the end of series two George almost fell victim to an uprising at his gates. Jack debates whether or not his character is becoming more resistant to provocation…

"George has definitely grown up, in the sense that he feels like he may be beyond scraps like the ones he had in series one and two, letting himself fall into them would be the mark of weakness now. He is a more important gentleman with his sights on bigger things and if he is truly going to become the man he wants to be, a new aristocrat, then he needs to rein himself in a bit. On the other hand, he still has his temper and resentment bubbling that he can’t really control and although he tries to, he doesn’t completely succeed."

Whilst George still has his temper, Jack has enjoyed exploring the new side of George who is rather enamoured by his new wife, Elizabeth.

"We have never seen George at the mercy of his heart until now. We see that now he has Elizabeth he genuinely needs her. He needs her emotionally and as his partner in society and the idea of losing her would be horrific so it is nice to see his dependence.

"I like that he looks to her, she is still his social rudder in that she knows how to behave in this social world much better than he does and he sees that. So while he would prefer to take the lead there are moments when he has to let her do so. The key thing is that his emotions are taken by surprise and he is much more at her mercy than he expected to be. The fun thing about any character is the unexpected. George is set up as someone quite villainous, quite unfeeling and so when you see windows into something else it is exciting."

Whilst George is happily married and living in Poldark manor we would assume tensions with Ross are quelled. However, Jack reveals this may not be the case.

"There will always be tension between Ross and George; they have a chemical reaction to each other. For George to have married Elizabeth and be living in Trenwith is indeed a victory in the face of Ross but there are many other ways they have to come up against each other.

"Their rivalry changes, it is not the same old thing; there is a tone to it that morphs with them as they grow. There are also new characters introduced this series who bring Ross and George together in new and different ways."

Jack tells us about all of the new and exciting characters joining this series of Poldark.

"Universally all of the new cast members are so lovely and full of enthusiasm for the show, which is a wonderful thing. The story grows and grows and all of these really great characters find new and interesting ways of interweaving and pushing the story in different directions. I got to work with a few of the new actors.

"Morwenna Chynoweth, played by Ellise Chappell, is Elizabeth’s cousin who George hires as a governess to look after Geoffrey Charles in hopes it will also pull him away from his mother. Morwenna soon gets involved in lots of different stories in weird and wonderful ways.

"There is also the Reverend Osborne Whitworth, played by Christian Brassington, who is a fairly hateful local clergy who George exploits to socially advance."

One of the returning cast members has a specifically special on screen dynamic with Jack’s character and it is one of his favourites to film.

"George’s bitter relationship with Aunt Agatha, who is played by Caroline Blakiston, really goes somewhere this series. It has been bubbling but now it takes off.

"I love those scenes so much, they are brilliantly written. I love Caroline, she is an exceptional, hugely experienced, wonderful actress and it is such a pleasure to film those scenes with her, we have a huge amount of fun doing them. It’s really interesting because you think George would be able to handle an elderly woman sitting in a creaky chair in the corner but actually it is she who really gets under his skin. It is the same with Elizabeth’s son, Geoffrey Charles. He is a little boy and yet somehow he really gets under George’s skin. It’s a nice surprise to see someone apparently so powerless driving George around the bend."

Jack is thankful for such a positive reaction from the public and a growing audience, Jack tells us why he thinks Poldark has struck a chord.

"The public reaction has been amazing. I am constantly amazed by the amount of people who watch and love the show. It’s people full of love and excitement for the show and wanting to know where it is going. We are super lucky; we have a very loyal and supportive group of watchers."