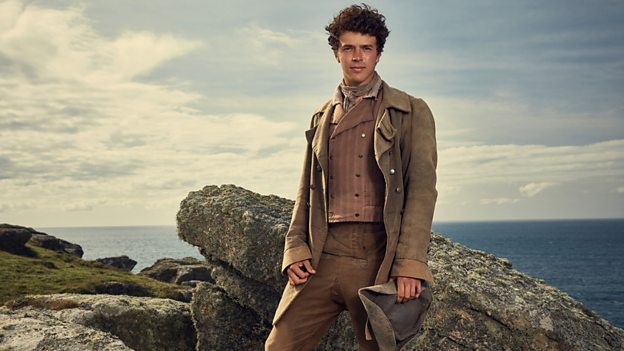 Drake and Demelza are very similar characters in their passion for life. They share this young and energetic spirit.Harry Richardson

Category: BBC One; Drama
Having never even been to Cornwall, Australian actor, Harry Richardson, never imagined he would land a lead role in a Cornish period drama…

"I was terrified for my audition, as I had never even met someone from Cornwall! When they told me I would be playing a Cornish miner I thought it was unexpected but kind of brilliant. I did one audition and when it looked like I may get a second one I watched the show profusely and focused on the brilliant accents that people like Eleanor Tomlinson (who plays Demelza Poldark) have and I studied that very closely. I was completely stunned when I found out I had got the role.

"I had never seen Cornwall before; it was breath taking. The sets were these incredible cliffs that haven’t been touched for 400 years and huge open spaces that stretch as far as you can see which would have been the same landscapes our characters would have been on. With surroundings so incredible there is nothing you can do but be in the moment. It felt like time travel. The drama and the passion of those landscapes is amazing. I’ll be going back forever."

Harry tells us a little about his character, Drake Carne, and what drew him to the role.

"Drake is Demelza’s younger brother and when our father is sick Drake is sent to visit her to see if she might come to bid him farewell and the story starts from there... Drake has so much energy and exuberance and this incredible passion for life, which is exciting to play. He goes on this incredible journey from boy to man as he starts to realise what is important to him, what his beliefs are, where he stands on love and religion and life and where he is going to sit in society. It is an incredible opportunity as an actor to go on a full, well-rounded journey."

Harry tells us about the relationship Drake shares with his sister, Demelza and her husband, Ross Poldark (Aidan Turner).

"Drake and Demelza are very similar characters in their passion for life. They share this young and energetic spirit. Even when Demelza is going through rough times she remains passionate about this town, it’s people and about nature. Drake is very similar in his outwardly focused outlook. They share a bond because they were quite close when they were growing up and they now share commonalities in their headstrong attitudes and persistence in love.

"Drake also learns a lot from Ross and starts to see what sort of man Ross is and what qualities he finds admirable. Ross is quite a hard master to win over or impress but they have an interesting bond nonetheless. Drake learns through his experience with Ross what to do with matters of work and with Demelza what to do in matters of the heart."

Describing Drake as a "driven romantic", it is no wonder matters of the heart are so important to him. Harry reveals a little about the turbulent romance that unfolds this series for Drake and another new character, Morwenna Chynoweth (Ellise Chappell).

"Drake and Morwenna instantly have a timeless connection and a very relatable love where two people fall for each other that are in completely different worlds and social classes. Everything is pulling them apart but the one thing they know to be true is their instant passion for each other. They are also quite beautifully youthful in their affection in a way that is innocent and is all give, which is lovely. Drake is a huge romantic but I guess we all are when we find someone who we fall head over heels for."

Harry has really enjoyed working alongside his fellow new cast members as well as the established core cast.

"Working with Ellise was fantastic; she is so giving and brilliant at what she does and working alongside Tom York who plays my brother, Sam Carne, was amazing because we got along like a house on fire from the first day.

"Having a brother to go through this wild experience with, to both be completely new to it and to be helping each other was great. It was fantastic to be able to bounce ideas and feel like we had each other’s back.

"The people who have been on the show for the past two years were so knowledgeable and welcoming and still working so hard. They were all acting as if we were filming season one, they are so fresh to it whilst also having so much experience to share."

Harry has loved filming his first series on Poldark and he tells us about one of his most vivid and favoured memories during filming.

"The scenes set in France were incredible. We were filming night shoots all week in a giant castle with incredible fire lit halls and made-up soldiers dying all around us. We were all given muskets and were running around the grounds at 11pm at night blowing up doors and shooting at soldiers which was so much fun.

"It was almost torrential rain, it was freezing and no one could feel their fingertips. In between scenes you’re all huddling around complaining about it but once you’re rolling and you’re in it, you couldn’t imagine anything better… doing these fantastic scenes with these brilliant actors. It was epic."