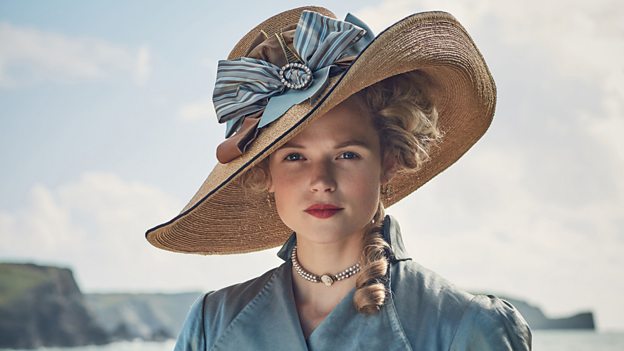 With Dwight being away, Ross and Demelza take Caroline in, they look after her and it is really nice for her, to have friends.Gabriella Wilde

Category: BBC One; Drama
Returning for her second series of Poldark, Gabriella Wilde reveals that there is a turbulent journey in store for her character, Caroline Penvenen, this time around.

"There is a lot of loss for Caroline this series, she loses her uncle and she begins to believe she has also lost her husband, Dwight Enys (Luke Norris) too when he goes missing in France. So whilst she is struggling with the grief of her loss, she is fearful that it may soon be two fold.

"Through that she really develops her relationship with Ross (Aidan Turner) and Demelza (Eleanor Tomlinson) and cements herself within society in Cornwall becoming very much a part of that world. With the sadness Caroline endures throughout the series we see her grow up a lot."

Gabriella has enjoyed developing Caroline’s relationships with different characters this series and specifically, her friendship with Demelza.

"With Dwight being away, Ross and Demelza take Caroline in, they look after her and it is really nice for her, to have friends.

"In the last series she didn’t really have interactions with female characters, she didn’t have any female friends or a mother or sisters and she was living in this male environment, which, I think, was why she was so sharp. However, in this series Caroline’s relationship with Demelza really develops and the kinship they share, although they are so different, is really lovely and has been a joy to play out."

Whilst her friendship with Demelza strengthens, Caroline’s relationship with Dwight is tested more than ever.

"Their relationship is a huge rollercoaster this series. At the start it was all very young much love whereas now it is more about their marriage and having to face very tough obstacles.

"When Dwight finally returns home, he may return physically but he struggles to come home mentally. Caroline is dealing with Dwight’s severe post traumatic stress disorder and she is feeling very rejected by him. That is something she has never really experienced before, let alone from the man she loves and has just married. She is in Cornwall and has just lost her uncle and so it is quite frightening for her at this moment and she loses some of her naivety through that. It is a very turbulent journey this series for her and for their relationship."

Whilst her character was going through a tumultuous period, Gabriella had to shake off Caroline’s emotions rather swiftly.

"As I had my baby boy on set with me I had to be able to drop my character’s emotions hour by hour rather than carrying Caroline with me.

"It is always hard and weird doing the big dramatic scenes and then running to feed my son, having to constantly switch in and out of it but you just learn as it goes along.

"It was a bizarre first six months of his life but it was amazing to be able to be a working mother and have my son with me, it was a luxury that I was very lucky to have."

Gabriella reveals what it is about Caroline that makes her such an enjoyable character to return to.

"Caroline isn’t your standard female character, especially for a period drama as she is punchy and bright and very quick witted. Caroline doesn’t fit the mould of her initial character breakdown; a rich heiress in the 18th Century, as like Demelza, she is incredibly strong but in a very different way.

"Poldark has very strong female characters that are written in a very clever way. Caroline doesn’t have to be so tough all of the time, she is bright and frustrated by her position but at the same time she also enjoys it which is quite real and refreshing. She doesn’t have to be this hardened woman to be a strong woman, she is still young and naïve and joyful in lots of ways but will also not be told what to do."

Gabriella reveals what she believes to be the secret to Poldark’s success.

"Poldark’s popularity comes initially from the stories, the brilliant writing as there is something about Poldark that is quite current. Whilst it is a period drama the themes that run through it are relevant. You get that Sunday night escapism but it also touches a sensitivity in people at the moment."