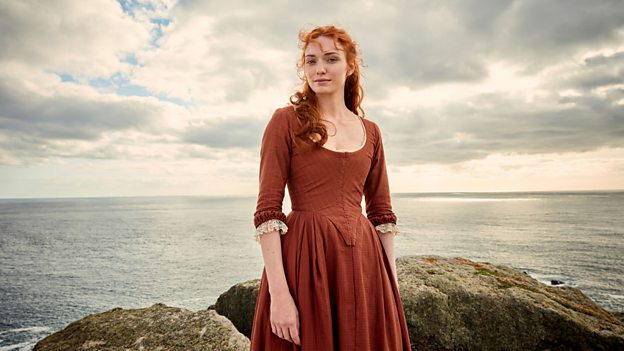 I had read the books so I knew it was coming but I was very excited to see who it would be, who could possibly compete with Ross Poldark…Eleanor Tomlinson

Category: BBC One; Drama
Eleanor Tomlinson enjoys being one half of the very honest on-screen marriage of Demelza and Ross Poldark.

"Ross and Demelza have a realistic relationship and that is what people like about them. It has never been a fairy tale romance. They have a lot of arguments and problems in their marriage but they have two children and so they question what they should do, whether they should stick it out or separate? It is interesting to see how they handle everything from living together to having children and how the threat of other people to a relationship is very genuine.

"It is not solely a modern issue; it is very real and has been going on for generations. The series has such resonance as it makes you realise that the things we deal with today were ever thus. The reality of playing a woman who is in a marriage which isn’t all roses but is complicated and nuanced has been really interesting."

Demelza knows all too well the threat another person can pose to a relationship and that is even more prominent this series.

"Last series ended with Elizabeth finding out she was pregnant and that is very much where we pickup Demelza, waiting to see when this baby comes.

"Whilst Demelza is dealing with the emotions surrounding that, she has decided to stay with her husband through thick and thin, with the hope he will now include her in his decision making and they will handle this and everything else as a team and as the power couple that they are.

"However, Ross slightly falls short of the mark with regards to that as he doesn’t quite know how to handle something like this himself. As a result, he cuts Demelza out which just exhausts her and as the series goes on she is constantly feeling left out and not respected and she becomes distant."

As a result Demelza welcomes the attention of a new man in uniform...

"Ross and Demelza’s relationship becomes a little fractured and she gets a lot of attention from a new young man, Hugh Armitage (played by Josh Whitehouse) who, more than anything, just makes her feel special and attractive whereas Ross has been ignoring her. Demelza is flattered and she begins to fall in love with the idea of being wanted.

"However, it is not a relationship that deliberately comes into the show to create scandal it is more of a slow burn that comes from being left behind by her husband who doesn’t include her in his decisions. It’s more the struggles of a real relationship and of being ignored which allow eyes and hearts to wonder.

"I had read the books so I knew it was coming but I was very excited to see who it would be, who could possibly compete with Ross Poldark…"

Other new cast members come in the form of Demelza’s two brothers Drake and Sam Carne, played by Harry Richardson and Tom York.

"It has been so lovely creating the bond between Demelza and her bothers and it has been really nice to have new actors come in as it gives the whole series a new injection of energy. They are both absolutely brilliant actors and have done a fabulous job with their characters.

"Ross has got quite involved with them too and he particularly warms to Drake. Maybe Ross is feeling guilty about his own actions and so he is anxious to extend open arms to Demelza’s family and tries to do something good by helping her brothers."

"We have had difficult moments on set in the past with freezing cold sea water or being buffeted by gales but this series was quite a nice shoot for me. There was one moment however when I had to run into a pond to help Drake (Harry Richardson.) The pond absolutely stank of algae so that was pretty grim. Poor Harry was lying face down in it for a solid 40 seconds before I ran in to get him out!"

But generally Eleanor relishes playing one of the feistiest characters in period drama.

"Demelza is such an independent female character who makes her own decisions and cuts out her own path and that is what myself and our audience love about her, that she is a strong and somewhat modern woman for a period drama.

"It’s so rare to come across a character who grows so much, to start off as an urchin mistaken for a boy and to end as the wife of Ross Poldark and Lady of the house is an extraordinary journey to take the character on and it’s been brilliant."

And she reveals the effect playing such a strong character has had on her personally...

"Demelza has taught me a lot about myself and playing her has made me a more confident person. The more I learn about her and the way she handles situations, the more I admire her. I have taken a lot of her on board in my personal life, as I believe she is a great role model for women.

"She is very true to her own beliefs and she has no airs and graces and that’s what I love about her. Demelza is no shrinking violet, she is a strong powerful woman and I enjoy playing a female role that is so liberated. I am all team Demelza."