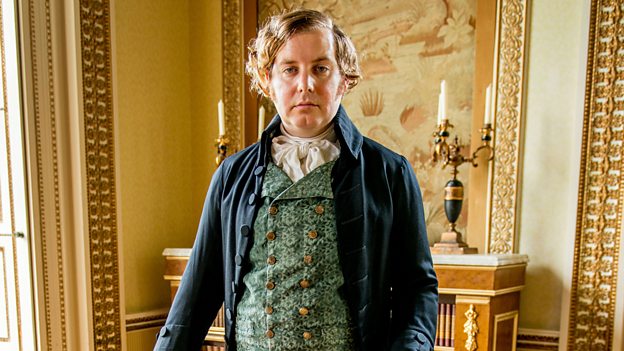 Normally actors have to get into shape for a role rather than out of it but Osborne is described as being a rather large character and a man of a huge appetite so there was no getting around that; I had to gain a lot weight.Christian Brassington

Category: BBC One; Drama
Christian Brassington joins the cast of Poldark as the gluttonous Reverend Osborne Whitworth and discovered it was a weighty role, in more ways than one...

"Normally actors have to get into shape for a role rather than out of it but Osborne (‘Ossie’) is described as being a rather large character and a man of a huge appetite so there was no getting around that; I had to gain a lot weight.

"I ate a diet that included some protein shakes but it was mostly Häagen-Dazs ice cream and beer. I quite enjoyed the process of putting the weight on to start with but near the end I didn’t enjoy it so much and now I am trying to lose it which is no fun at all. It takes much longer to lose weight than to put it on. I have worked it out with a nutritionist and personal trainer but it is much easier to sit here eating a burger than go for a run."

Christian tells us what it has been like to step into such an interesting and controversial role.

"As an actor this role is a treat as he is definitely not your run of the mill period drama character. Ossie is completely unaware of his own self-importance and is obsessed with his appearance and with this very thin veneer of being this man of God. He has absolutely no self-control when it comes to either food or women. However, whilst he is a monster, Debbie (Horsfield) has written him extremely well because I don’t think that is your initial reaction to him. It is only once the series develops that his true colours start to come out."

Christian tells us where we find his scandalous character in the upcoming third series.

"We find Ossie after his wife died as a result of complications in childbirth, something that was unfortunately fairly common at the time.

"However, he seems completely unbothered by the fact that she has died and he is instantly on the lookout for another wife. He has two little daughters whom he shows no interest in as to him, they are a burden. He is from a very well-to-do, aristocratic family and is constantly trying to social climb, using his name to attempt to further his own interests. He goes into every situation assuming he has the higher social status and that others will bend to his will. That is why Ossie does not realise when he is being outwitted by George Warleggan (Jack Farthing), who uses him to forge connections and gain a higher social status."

"Ossie is an extremely greedy character who has champagne tastes on a beer income. He is a vicar and he talks about being a man of God but he has also got this voracious sexual appetite, which seems impossible to satisfy. It is unreal what he gets up to."

As one of the largest and gaudiest characters in Poldark, Christian talks to us about the amazing costumes he sported throughout filming.

"I was reading an interview with Gucci’s creative director (Alessandro Michele) and he spoke about this yellow waistcoat at the V&A museum and in Debbie’s script there is mention of this lemon, silk waistcoat which Ossie wears and thinks he looks fantastic in so I thought I would go and have a look. They had a great collection from around this time period and I found that really useful to go and see various styles that Ossie may have worn.

"All of my costumes were ever so slightly too small for me on purpose so it looks like I am bursting out of my clothing. The poor costume team had to get me in and out of my shoes all of the time because trying to bend down meant buttons coming undone and flying off. Ossie spends all of his money on canary (wine) and clothes and so it was a treat for the costume team to dress me up because there is quite a lot of poverty in Cornwall during this time but my costumes were very grand."

Whilst he enjoyed getting dressed-up everyday, Christian also enjoyed filming in some incredible locations.

"I got to film in some astonishing country houses around Bristol as well as an actual vicarage next to an old church. It was beautiful, this bucolic scene of sheep grazing with no wind turbines or telephone masts or anything. It was just one of those days where everything came together. We found this incredible location and the sheep were wondering through and the sun was hitting it so beautifully so when they showed us the trailer at the wrap party that scene looked amazing."

How does Christian feel joining a show and knowing that all eyes will be on it and him?

"It is pretty difficult to imagine millions of people watching you do something. It was incredibly exciting to get this role and I feel very lucky to be a part of the drama. The main cast were all so kind to the new members of the cast and are really great people to work with which helped an awful lot. Myself and the other new cast members did have a chat about it quite early on, about how big the show is and what a real privilege this experience has been. I feel so lucky to have been given this opportunity and extra lucky to have had such a great time."

"Christopher Biggins was my predecessor in the 70s series - when the character was voted the most hated man on television. It’s a lot to live up to, which is what Winston Graham’s family told me when they visited set. They were really good friends with him so no pressure there. I hope I have done them proud."