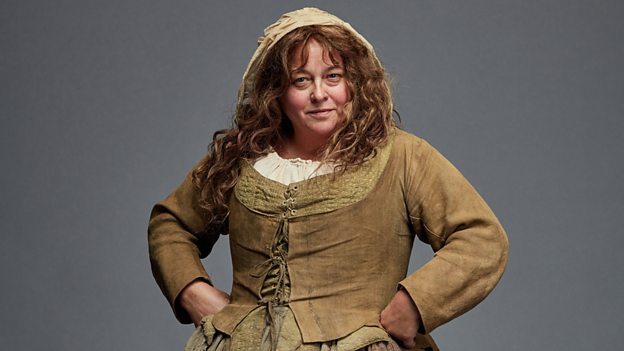 The women of Poldark come into their own in this series.Beatie Edney

"Prudie is very close to Demelza this series; they have become more like friends and she becomes an important confidante of Demelza’s. There is a big secret that Prudie is privy to which happens at the beginning of the series and it overshadows Demelza and Ross’s relationship. She is very much in Demelza’s corner, even above Ross. The two of them really have a laugh and there are a few episodes where Ross is away so they are very much running things at Nampara. The women of Poldark come into their own in this series.

"Also Demelza’s brothers appear and Prudie has a hilarious relationship with them for completely different reasons. Sam Carne (Tom York) is very religious which obviously doesn’t go down too well with Prudie; you can imagine what she thinks about that. Drake (Harry Richardson) is very innocent and is a good looking boy so she really has fun with him and behaves like a dirty old lady."

Other than enjoying the new company of these fine young men, Beatie tells us what is in store this series for Prudie.

"Prudie is happily back at Nampara and Judd is away, working for trade. Whilst I miss Phil Davis, my partner in crime, Prudie claims life is much easier without him. However, I think she secretly misses him. They are co-dependent, like drunken toddlers.

"Prudie has become a little more domesticated this year; her cooking skills are slowly improving. I have more children to look after which is fabulous. In one of my first scenes I have one baby in my arms, another next to me, Garrick the dog by my feet and I’m trying to hang up the washing - so her hands are full! Prudie is pretty lazy so you can imagine how that all goes down with her.

"At the end of the series Prudie witnesses something that is absolutely pivotal to what has happened and will happen to Demelza and it is really shocking for her. So she is the linchpin to a big plot point."

Whilst on-screen Prudie is building her relationships, so too is Beatie with the all of the new cast members.

"The influx of new actors this year has completely transformed things; I love all of the new cast members. I have had the most fun shooting Poldark this year of any job I have ever done. I am completely in love with Demelza and the Carnes; we’re like a little family. It has really bonded us all together.

"We go and see movies together and then we have heated discussions about the movies we watch. We have a bunch of restaurants in Bristol that we go to all of the time. Award ceremonies are so much more fun when we are all there together. Something we did a lot was going climbing. Tom (York) is a proper climber and has done a lot of it so we all went to an indoor climbing wall which was so much fun."

Most of the female actors in Poldark are made up to look beautiful; Prudie however has a slightly more unkempt look, which Beatie enjoys.

"It is great being able to go in at six o’clock in the morning looking like death and come out looking even worse whereas normally the glamour of the profession means you can go in looking quite rough but you are made to look beautiful. This industry is very focused on the way you look and so when I was younger I did all of the parts where I had to look pretty so it is releasing for it to not matter what I look like for the first time. It is great for your self-confidence, when it is better the worse you look, as you don’t feel self-conscious.

"It fills me with delight to smile at men with my rotten teeth; it makes me laugh so much. I find it difficult to keep a straight face sometimes with Aidan. I do try and make a lot of the members of the cast laugh, especially Luke Norris who plays Dr Enys but I never ever succeed. In rehearsals I would cosy up to him and flash a smile but he doesn’t flinch, which is annoying. He is brilliant at keeping a straight face whereas Aidan can’t help but laugh all of the time."

One of the things that Beatie has enjoyed the most about being on set in Cornwall is being able to have her canine companion alongside her.

"I have a beautiful and very clever rescue dog, Billie, who has been on stage at the RSC. She has really bonded to me and so the producers allow me to take her to Cornwall, which is incredibly kind. It is great as I am not always shooting and we are in a field most of the time so there’s always somewhere wonderful I can walk her."

Beatie reveals what it is specifically about her character that she likes so much.

"I really like Prudie’s righteous disapproval of most things and I also enjoy playing a character so extraordinarily lazy. However, it is Prudie’s integrity that I like the best. She is always herself; you can’t dress her up as something else and I like that. There is a scene where everyone dresses up for a particular event and yet Prudie is still wearing her apron."

Beatie reveals a new element to Poldark that we will see this series.

"Something that I had to do this series, which I have never had to do so much of before is singing. The poor people sing more than ever this series. We have actually formed a band called Prudie And The Carnes which includes myself, Eleanor and her on screen brothers. Tom had to do so much singing at the read through and without any rehearsals it sounded amazing! He had everyone singing along.

"I didn’t realise we would be doing Poldark the musical so soon."